How I Cracked the Shakshuka Code — and Made Some Awesome Eggs 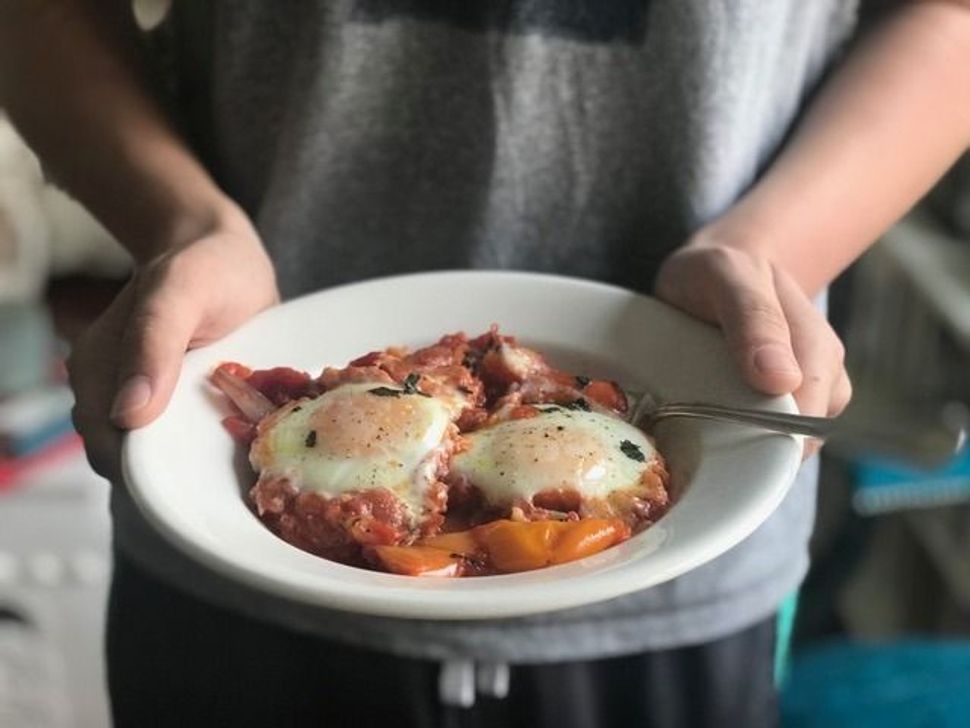 ‘I could really go for some tomato-egg right now,” my 15-year-old son, Teddy, said to me.

“You what now?” I asked, confused but intrigued.

“You know, Mom!” he mewled in mock exasperation. (I’m not sure I’ve ever seen Teddy reach real exasperation.)

In retrospect, of course, I was being dense.

“The stuff we ate for breakfast all the time in Israel!” he finally explained.

Shakshuka is a dish that’s ubiquitous in Israel but not particularly well-known outside North Africa and the Middle East (though it’s gaining popularity in a few urban areas of the United States). Eggs are baked in — or sort of on — a thick, cumin-spiced sauce most commonly concocted of tomatoes, peppers, onions and garlic. After the sauce is cooked, the eggs are cracked right on top and the pan is put into a hot oven for a few minutes until the eggs set.

Part of Teddy’s easygoing charm is that he seldom asks for anything, which makes it all the more delightful to accommodate him when he does.

So, the following Sunday, while he was still asleep (since he is a teenager, this very well may have been early afternoon), I set about the task of assembling the ingredients and creating my own recipe. I didn’t want to stand over the stove, sautéing vegetables, so instead I put roughly chopped peppers, tomatoes, carrots, shallots and garlic in a baking dish — I used what I had around; there was a bowl of shallots, otherwise I would have chopped up an onion — tossed them with olive oil, salt and pepper, and put them in the oven. Twenty-five minutes later I stirred in some spices and a container of chopped tomatoes, then I popped it all back in the oven for 20 more minutes.

Finally — and here’s the dramatic part, where I called Teddy over to the kitchen — I made four shallow wells in the sauce with the back of a large spoon and cracked an egg into each. I put the pan back in the oven for what turned out to be 10 minutes (I checked after eight, but the whites weren’t yet white).

Once it was out of the oven, I sprinkled fresh mint over the top, drizzled on a little olive oil, then spooned some of the sauce and the eggs into two shallow bowls. The results, if I may say, were phenomenal. Teddy asked how I’d done it, and when I gave him the play-by-play, he pointed out that the process had taken a whole hour. That may be true, but almost all of it was oven time, during which I attended to other tasks.

Note that the sauce can be made up to a few days in advance, making the final preparation super simple. And we could easily have fit more eggs into our baking dish, had we needed to feed other people.

There was leftover sauce, which I scooped out of the baking dish into a container and put in the fridge. So, the following morning (or late afternoon, as it were), when Teddy wanted more shakshuka, I suggested that he put the leftover sauce in the microwave while he fried a couple of eggs to put on top. He did so — beautifully, I might add — and his second-day “tomato-egg” was as good as the first. (Maybe better, in fact, since he’d made the eggs himself, and the flavors in the sauce had been given the chance to meld overnight.)

I always thought that “shakshuka” was a fun word to say, but I get a kick out of our new nickname for a dish that will now become part of our regular morning (or early afternoon, as it were) rotation. 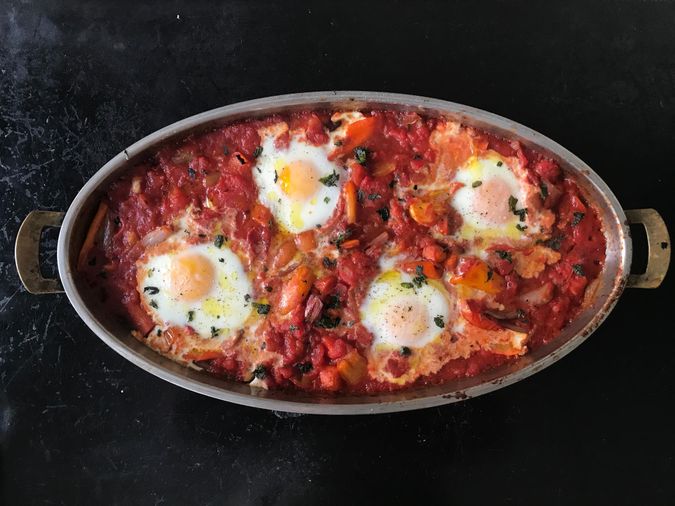 Tomato-Egg, a Fresh Take on Shakshuka

2 shallots, peeled and roughly chopped (you can substitute a small onion)

½ teaspoon salt or more to taste

How I Cracked the Shakshuka Code — and Made Some Awesome Eggs