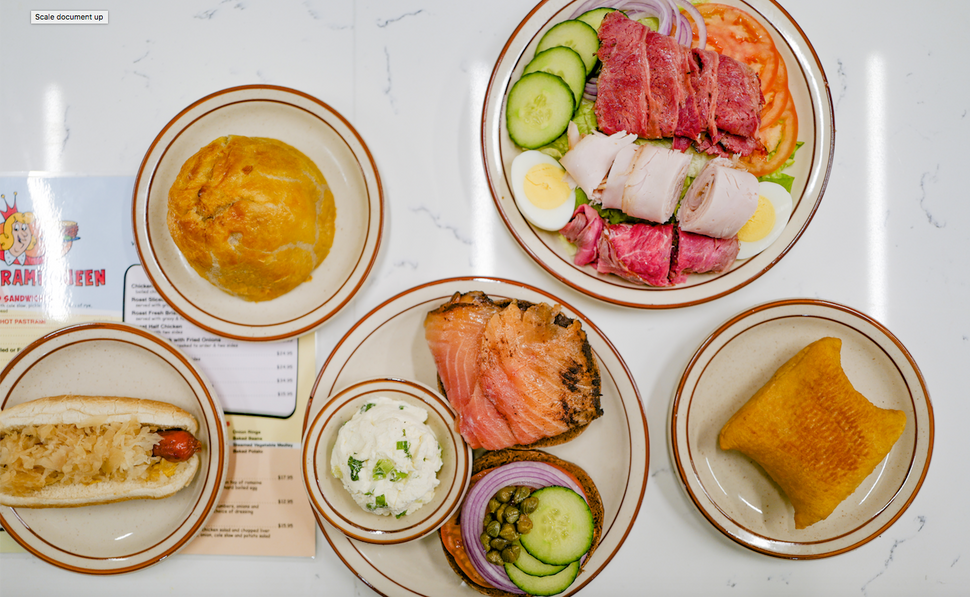 A new kosher deli wants to fill the pastrami-scented void left by long-departed Manhattan stalwarts Carnegie Deli and the Stage.

Pastrami Queen, which opened inside Times Square’s sleek Pearl Hotel last week, is serving up house-made blintzes, old-school tongue sandwiches, and even chicken in the pot to sometimes befuddled tourists and seen-it-all locals.

The eatery, whose roots stretch back six decades to Brooklyn, prides itself most on its namesake: Lush, house-cured pastrami, served hot and gleaming on soft rye, atop oversized burgers, and even in a chef’s salad. A signature pastrami sandwich, served with cole slaw and pickle, runs $18.95 — about four bucks less than Katz’s and Second Avenue Deli.

Unlike the cramped, no-frills Upper East Side location it opened in 1998, Pastrami Queen’s new space is bright, sleek, and colorful, with pop-art murals and low booths along with a small counter. “It’s not the typical deli with everyone’s pictures on the walls,” manager Jack Turner told the Forward. For its Times Square debut, the restaurant broadened its menu, adding all-day breakfasts along with lox, pastrami salmon, and whitefish sourced from venerable Brooklyn-based purveyor Acme Smoked Fish.

Now owned by Friedmans Restaurant Group, a Big Apple mini-conglomerate, Pastrami Queen feels a bit like a unicorn in New York. “We have what I’d consider the only real kosher deli left in Midtown, where there used to be an abundance,” manager Jack Turner told the Forward. “Now, places are kosher-style, or try to emulate kosher with menu items.” The Upper East Side Pastrami Queen became a favorite of foodies like the late Anthony Bourdain. The eatery starting life as Pastrami King before ownership changes led to a tweaked name and the move to Manhattan. 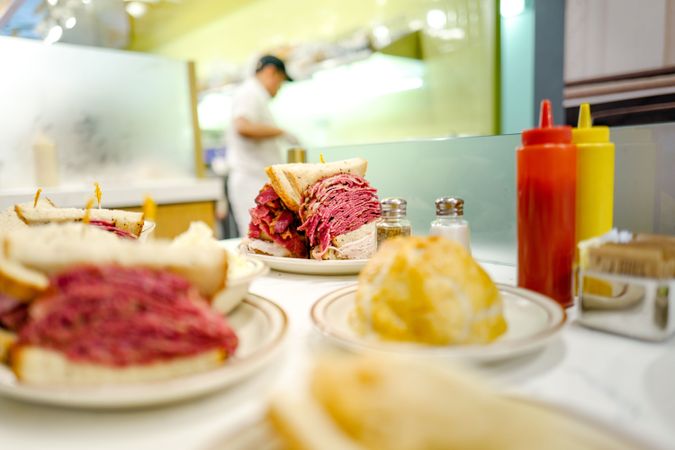 Jewish delis have become trendy in hotels, including Mile End Deli at Nashville’s Fairlane and Zobler’s inside London’s Ned hotel. Why, we asked Turner, is haimish suddenly hot in hospitality?

“Restaurants in hotels are usually run-of-the-mill, American-grill type places,” Turner said. “Hotels are putting niche restaurants in dining spaces so you have a name with a following, and that’s more appealing to customers than a regular restaurant.” Pastrami Queen plans to keep expanding, Turner said, though locations haven’t been firmed up.

Despite the “astronomical” costs of meat in running a kosher establishment, Turner said Pastrami Queen’s planning a long run in the Theater District. “There’s definitely a demand for a kosher deli supervised by a rabbi,” he said. “We feel like to be a real kosher deli is the best business for us to practice. The costs come with the territory and the reputation you’re trying to make for yourself. A lot of places that went under had to deal with rent issues or demanding landlords.”

Since Turner’s angling to replace Carnegie Deli in the collective memory, what did he think of their sandwiches? “I’ve never been to Carnegie,” he confessed. “When it came to eating a pastrami sandwich, I always went to the parts of Brooklyn where I grew up. They had great deli.”

Have a look at our new location! Our address is 233 W 49 Street inside the Pearl Hotel. #timessquare #theatredistrict #newyorkcity #newyork #pastrami