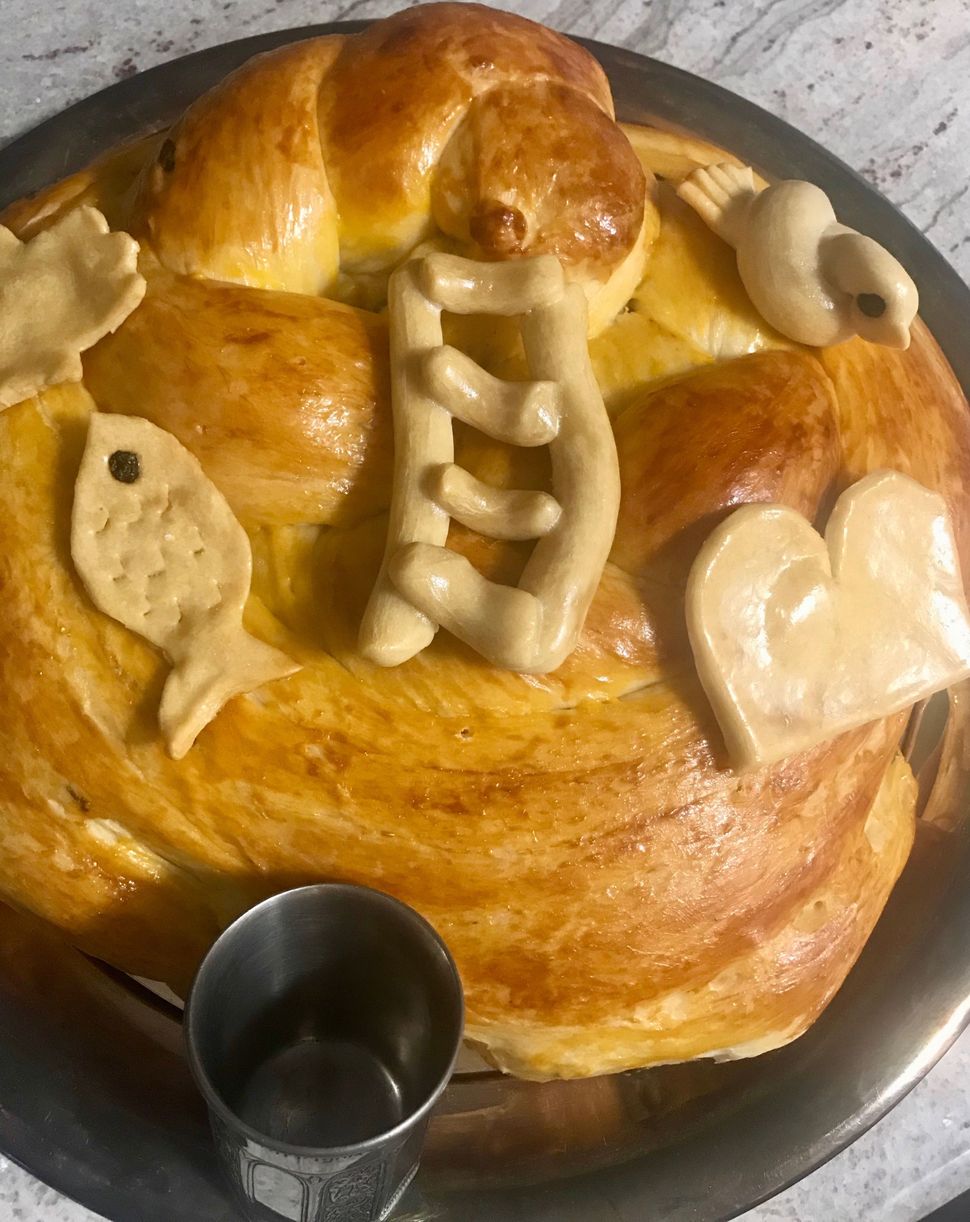 The breathtaking Seven Heaven Challah brings a diversity of Jewish experiences and palates to your festive Shavuot table. A lesser-known Sephardi custom, it mixes together the celebration of the wheat harvest of Shavuot, Chag Hakatzir, (the Harvest Festival) with the customary milk-based foods associated with the revelation of Torah at Mount Sinai. Also called Los Sieto Cielo or Pan de 7 Cielos, its anise-flavored liqueur enhances its unique recipe and shape.

Rooted in Spanish Jewry, it has been baked by Jews in Greece, Turkey, and areas of Morocco where Spanish exiles settled. The Seven Heaven Challah was popular among Jews in Salonika for centuries, until the Nazis destroyed that community. Some customs reserve the elaborate loaf as a centerpiece for the midnight snack of the tikkun, Shavuot’s all-night study of Torah.

Several Jewish symbols adorn the fanciful bread, starting with dough formed into a ‘Mount Sinai.’ That mountain is surrounded by seven coils of dough representing the seven heavens mentioned in the Talmud (Hagiga 12: B). Five symbols top the circular bands of the heavens: the tablets of the Ten Commandments, a Jacob’s ladder to recall the ascent and descent of angels to and from heaven, a hand or hamsa recalling the five books of the Torah, a bird representing the dove of the Noah story (Genesis 8:8), and a fish representing fertility. Other adornments could include Miriam’s Well, a Torah scroll and pointer, or a Star of David. Whichever you choose, it will be heavenly to behold and to eat.

The recipe is adapted from Rabbi Robert Sternberg’s The Sephardic Kitchen: The Healthful Food and Rich Culture of the Mediterranean Jews. This video shows an Israeli baker demonstrating his simplified shaping of the Seven Heaven challah, using regular challah dough.

INSTRUCTIONS for the bread dough Dissolve the teaspoon of sugar in the water in a small bowl. Stir in the yeast and set aside in a draft-free place to proof (about 10 minutes). The yeast will be ready when it is bubbly.

While waiting for the yeast to proof, put 1 cup flour into a large mixing bowl. Make a well in the center of the flour.

Add the yeast mixture to the flour and stir in well. The mixture will be somewhat liquid, thicker than pancake batter, but not stiff enough to shape into a dough by hand. Place the mixing bowl and dough into a plastic bag and set aside for 45 minutes in a draft-free place. The flour mixture will bubble up and begin to rise, forming what is called a sponge.

After 45 minutes have passed, add 4 tablespoons sesame oil, milk, beaten eggs, 1 ½ cups sugar, salt, and anise liqueur to the sponge. Begin to knead in the remaining 6-7 cups of flour. Mix and knead steadily until the dough becomes soft, moist, and not sticky. You will use more or less flour depending on the flour and the humidity of the day. As it achieves its consistency, knead in the raisins and roll the dough into a ball.

Wash out the same large mixing bowl used for making the dough. Place about 1 tablespoon oil (sesame or other) the bowl. Roll the dough ball around in the oil a bit to cover it with oil. Cover with a plastic bag and let rise until doubled in bulk (about 1 ½ to 2 hours). Or place in the refrigerator overnight.

INSTRUCTIONS for shaping the dough—either skip below to the instructions Sternberg’s shaping instructions or check out this note for other approaches.

INGREDIENTS for the shaping dough: (from Traditional Recipes for Korovai (The Ukrainian Museum, NYC)

Mix all the ingredients into a dense dough and knead for about 15-30 minutes. Place in a plastic bag and refrigerate overnight. When ready to use, take small pieces at a time to form symbols. Place prepared decorations on a parchment paper covered cookie sheet and bake/dry in a 200-degree oven for 1 to 1 ½ hours. Remove from the oven and immediately make a hole in the bottom of each symbol with a toothpick or skewer. Leave the toothpick to use to attach the symbol to the bread when ready. In the meantime, stick the items into a styrofoam board, an egg carton or a pan with holes in it to cool and to keep safe until used.

INSTRUCTIONS for shaping mountain and heavens

When the dough is ready, gently deflate it. Heads up: This takes time so if you are able to work with a partner it goes more quickly.

Take one-fourth of the dough and set it aside for the symbols unless you decide to use shaping dough for the symbols. (See NOTE.) Divide the remaining dough into two parts. Set half aside, covered in plastic bag into refrigerator, along with the quarter piece. Prepare space in the refrigerator for the baking pan.

For the mountain of Sinai (el monte): Divide the other half into three parts and roll each into a 24-inch long rope. Braid the three strands. Coil into an ascending spiral and lay in the center of oiled or parchment paper covered cooking sheet. Cover with damp cloth and place in refrigerator. A toothpick can be helpful in holding the shape.

INSTRUCTIONS for shaping of the bread dough into the symbols: ten commandments, hand, fish, bird and ladder. You may wish to find drawings of a bird, a fish, a hand or hamsa, and two tablets of the commandments to trace in the dough with kitchen scissors or knife. If you decide to use shaping dough or colored egg wash to distinguish the symbols from the rest of the bread, see above.

INSTRUCTIONS for shaping the symbols

To use the bread dough for the symbols, use the remaining quarter piece. Divide this into five equal pieces. Use one piece at a time while the rest of the dough remains covered in a bag in the refrigerator between shaping and placement of each symbol on the challah, keep it the refrigerator Design the tables of the law, luchot habrit, the hand/hamsa, the fish, the bird, and the ladder by rolling out the dough and cutting the shapes with kitchen scissors or a knife. A three-dimensional bird could work, too. Then one by one place on the heaven coils, and replace the challah in refrigerator after each. The ladder may be shaped from small strands with the rungs between.

Once all symbols are assembled and placed on the heavens, remove from the refrigerator and leave covered in a plastic bag to rise until doubled, for about 1 hour. After 45 minutes, preheat the oven to 350º.

Brush the bread with egg wash, If using a color wash on the symbols, do not egg wash the symbols at this point and see the NOTE above.

Bake for 40-45 minutes. After 15 minutes of baking, brush again with egg wash and place back in the oven for the rest of the bake time. Double check that the mountain section is baked through with a food thermometer. Set on a rack to cool. (Some people brush with honey and sprinkle powdered sugar and sesame seeds after the baking.)

Rabbi Deborah R. Prinz lectures about chocolate and Judaism around the world based on her book, “On the Chocolate Trail: A Delicious Adventure Connecting Jews, Religions, History, Travel, Rituals and Recipes to the Magic of Cacao” (second edition). She co-curated the exhibit “Semi[te] Sweet: On Jews and Chocolate” for Temple Emanu-El’s Herbert and Eileen Bernard Museum, New York City, now available to travel to your community. Most recently she has launched the #chocolatebabkaproject, an exploration of celebratory breads.