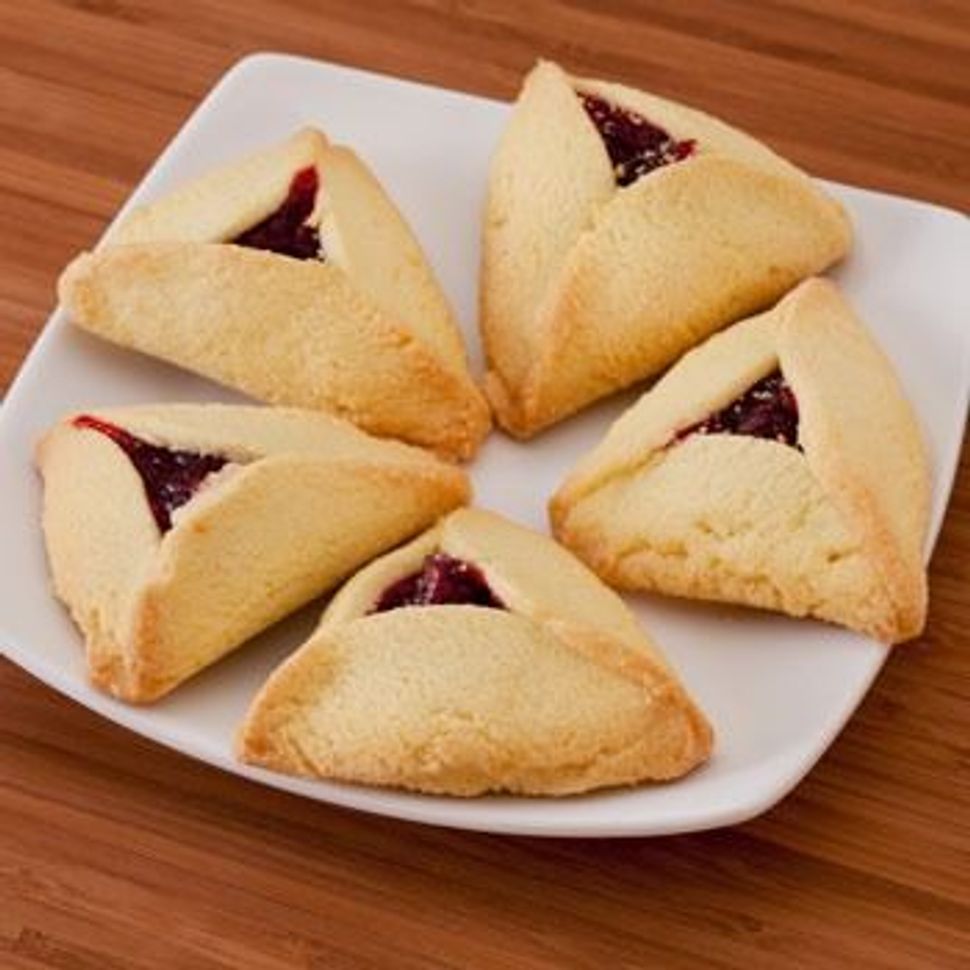 My girlfriend Felice bought a Zabars goodie box for Valentines Day. Now that’s a present I can get down with. And yesterday I had the bagels and lox. You can’t get this kind of lox in Los Angeles. Actually, Zabars calls it “Novie.” It’s oily, it reminds me of the smoked salmon of yore that my father used to bring home from the deli on Sunday mornings for brunch. That was a big thing, I’d like that every week.

And of course Felice got a babka, come on!

But she also ordered hamantaschen.

I’ve yet to find a non-Jew who craves hamantaschen. It’s a three-cornered cookie for Purim, a holiday most non-Jews would have trouble knowing, never mind naming its food. Where did Felice, who isn’t Jewish, get this craving? Previously she was married to a Jew, but I don’t remember him being very observant. And she’ll go to seders with me, but I don’t remember ever celebrating Purim, never mind eating hamantaschen. And by time Felice came into the picture my nephews were out of school, there was no carnival to go to, no dressing up as Esther or Haman.

The hamantaschen came in a box. There were four different flavors. You know, apricot, strawberry… And that’s one of the big problems with hamantaschen, there’s just not enough juice, just not enough nougat, just not enough of the good stuff inside! The ratio of jelly/sweet to cookie is WAY off. The cookie part should be de minimis, the stuffing should dominate.

But not with a hamantaschen.

They come in different sizes. You can find mini-hamantaschen and giant hamantaschen. Usually, the minis are better, because of the ratio referenced above, you get more of the gooey stuff inside. All that cookie in the giant ones…UGH! It’s almost torture to finish one.

Oh, that’s one thing about cookies, you touch it, you own it. You start it, you finish it. No tasting is permitted. And if you want to switch to another offering, you’ve got to finish what you started with first. The thought of one of those dry hamantaschen in my mouth while I’m eying something better…those are painful memories.

But that box, I could not resist it. Felice ate one, I decided to dip in, reluctantly, but I wanted to taste the apricot inside.

Wow, this was different.

I don’t usually want to waste my carbs on hamantaschen, I’d rather toast and eat another bagel and smother it with cream cheese. But a day after my first taste, I remembered those hamantaschen, and I decided to jump back in. Obviously yesterday’s festival of taste was an anomaly, right?

WRONG! I picked up another hamantaschen and I decided to partake of it slowly, which is not my style, I’m not a nibbler. And that damn cookie, the yellow part, the part I’ve always hated, was delectable! I can’t really describe it properly. There’s a slightly sweet taste, and it crumbles in your mouth, but it doesn’t reek of flour and I can’t believe I’ve eaten hamantaschen my entire life and have never experienced the holy grail, this!

That’s how life is, you wallow in mediocrity and then you experience greatness and you can’t believe what you’ve missed.

The BMWs of yore. When they all had relatively stiff suspensions, with that tight steering. You drove it once, you had to own it.

People complain about the price of things. Good enough is good enough. ONLY IT ISN’T!

It’s one thing if you can’t afford great. Not everybody can own a BMW, not even an iPhone. But when it comes to cookies? EVERYBODY CAN LIVE LIKE A KING! Why buy the low rent grocery store cookies when for just a bit more you can have the experience of a lifetime.

That’s exactly what I thought eating this hamantaschen just now. Thoughts of COVID-19 vacated my brain. As did thoughts of career. My age? My physical infirmities, my health issues? GONE! This was a peak experience, as good as it gets. All I could do was revel in the moment: I was at one with the hamantaschen.

To make your own Zabar’s hamentaschen, click here for the recipe.

Music industry analyst Bob Lefsetz writes the Lefsetz Letter, from which this article was adapted.