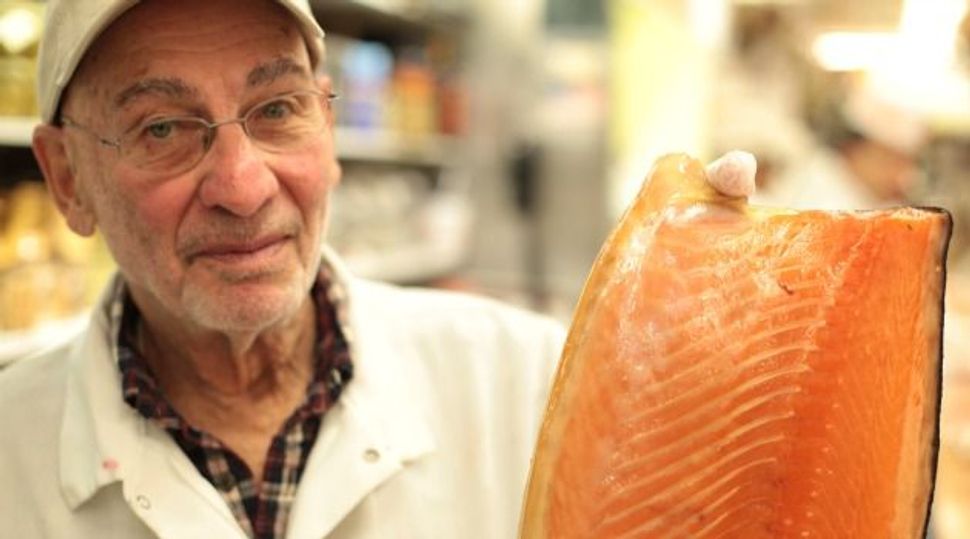 Lox Man: Len Berk, 84, holds up a side of Nova salmon. Image by Martyna Starosta

Lox Me Tender from Jewish Daily Forward on Vimeo.

Anne Rothstein stared through the counter glass, transfixed, as the knife slid through the fleshy pink salmon.

“Amazing,” Rothstein said to herself. “You are amazing.”

The subject of Rothstein’s praise, Len Berk, kept his eyes on the knife as it slid through the fish.

Berk, 84, is the last Jewish fish slicer at Zabar’s, the iconic delicatessen on Manhattan’s Upper West Side.

Dressed in a white apron and a beige Zabar’s baseball cap, Berk sliced a broad strip off a side of Nova and cut it lengthwise into two translucent pieces. Then he lowered the glistening fish onto a piece of parchment.

“It was so thin, you could read through it,” Rothstein told the Forward.

He was a certified public accountant his whole working life. He only started working at Zabar’s when he was 65.

Even after almost 20 years of slicing, Berk still strives for the perfectly thin slice.

“I’m not exactly sure what the perfect slice is, but I know that I haven’t achieved it yet,” he said.

Laid out in front of Berk on the salmon counter was pastrami Nova and peppered Nova, sable and whitefish, smoked tuna and baked salmon. Behind him rose cans of foie gras, jars of mustard and pickles, and packets of dried porcini mushrooms.

Rothstein looked down the line toward the other slicers performing that Friday afternoon: Ramon Reyes, Jerry Sze and James Bynum. “They are all good,” she said, “but some are better than others.”

Rothstein, 71, said that the fish counter reminds her of her youth in Brooklyn.

Smoked and pickled fish has that effect on thousands of New York Jews who recall the days when Zabar’s was one among many so-called “appetizing” stores in the city.

Saul Zabar, 86, a co-owner of the store with his brother Stanley Zabar, remembers those days, too. He also remembers when his entire staff was Jewish.

Zabar sat in a cluttered office with Harold Horowytz, one floor above the salmon counter.

Horowytz, 86, retired from running Zabar’s deli counter 22 years ago. But he still travels up from New Bern, North Carolina, to help out during busy holiday periods.

“What the hell am I going to do at home?” Horowytz said. “Fight with my wife?”

Horowytz said that when he started working at Zabar’s deli counter, in 1972, the only non-Jewish employee was “Shorty, the delivery guy.”

“Then came Chinese Kenny and his brother Henry,” Horowytz said.

“And Suey Louie,” Zabar said, motioning toward a photograph on his wall of Louie, who is Chinese and celebrated his retirement from Zabar’s in 2003 after almost 30 years at the store. 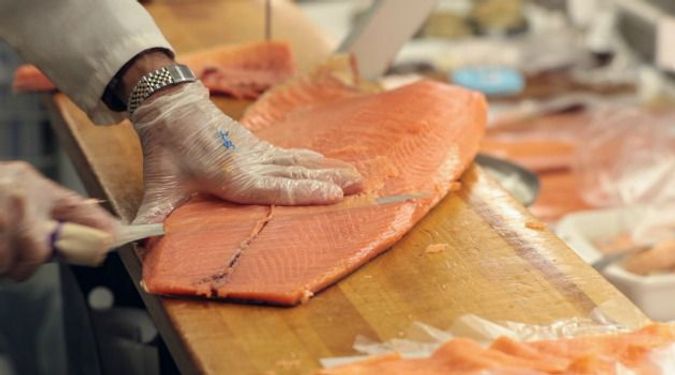 Handle With Care: Len Berk slices through a side of Nova at Zabar’s delicatessan in Manhattan. Image by martyna starosta

Today, apart from a handful of Russian Jews, most of Zabar’s 200 employees are Puerto Rican, Korean and Chinese, Zabar said.

In a typical week they marinate, pickle and mix thousands of pounds of Central and East European Jewish delicacies, including 3,000 pounds of salads, like whitefish and schmaltz herring.

Zabar said that lox, a heavily salted fish that laymen often confuse with smoked salmon, is one of the least popular offerings.

He said that older customers — a category he defined as people who have been shopping at his store for 50 years or longer — are the principal lox shoppers. “I don’t know why their doctors allow them to get near it,” Zabar said. “It’s so full of sodium.”

Berk has always had an interest in food, especially Chinese food.

After he sold his CPA business in 1992, he led food tours of China. Then, in 1995, a friend sent him a Zabar’s advertisement for a part-time salmon slicer.

Berk had always sliced his own salmon at home. Slicing fish at Zabar’s seemed like the perfect way to keep busy while doing something he loves. He works Thursdays and Fridays, and he always looks forward to it.

Driving the 20 miles to Zabar’s from his home in Pelham, New York, makes him feel like he is “in the middle of what’s going on today,” Berk said.

He begins a typical day at Zabar’s by cutting away the crusty parts of the fish to reveal the undersurface. “I love running my hand across it,” he said. “It’s a very sensual experience.”

Then he removes the bones with a pair of pinch pliers.

Experience has taught him to always keep half a pound of sliced Nova on the side in case a customer is in a hurry. He also sets aside a front part of the belly — the fattier, more succulent part of the fish — for the more discerning customers who request it.

He thrives on the banter with customers and on celebrity spotting. He says he has served dozens of famous people, including Jerry Seinfeld and Itzhak Perlman.

His work has inspired him to write several short stories and poems, too. Most of them recall interesting employees, customers and events at Zabar’s. But some are more meditative. They explain why, even at 84, Berk is unlikely to retire anytime soon.

Me and My Salmon

Chaos surrounds me.
The world is in turmoil.
Palestinians and Israelis can’t negotiate peace though they have sought it for 100 years.
(Or have they?)
My friends inhabit the various stages of dying from Alzheimer’s, from Parkinson’s, dementia, cancer and other forms of impending death.
Between me and my salmon there is peace.
I gaze down on it, I slice it and nothing else exists.
Nothing but me and my salmon.

This article was corrected on December 31, 2014, to identify Len Berk’s first career as certified public accountancy.