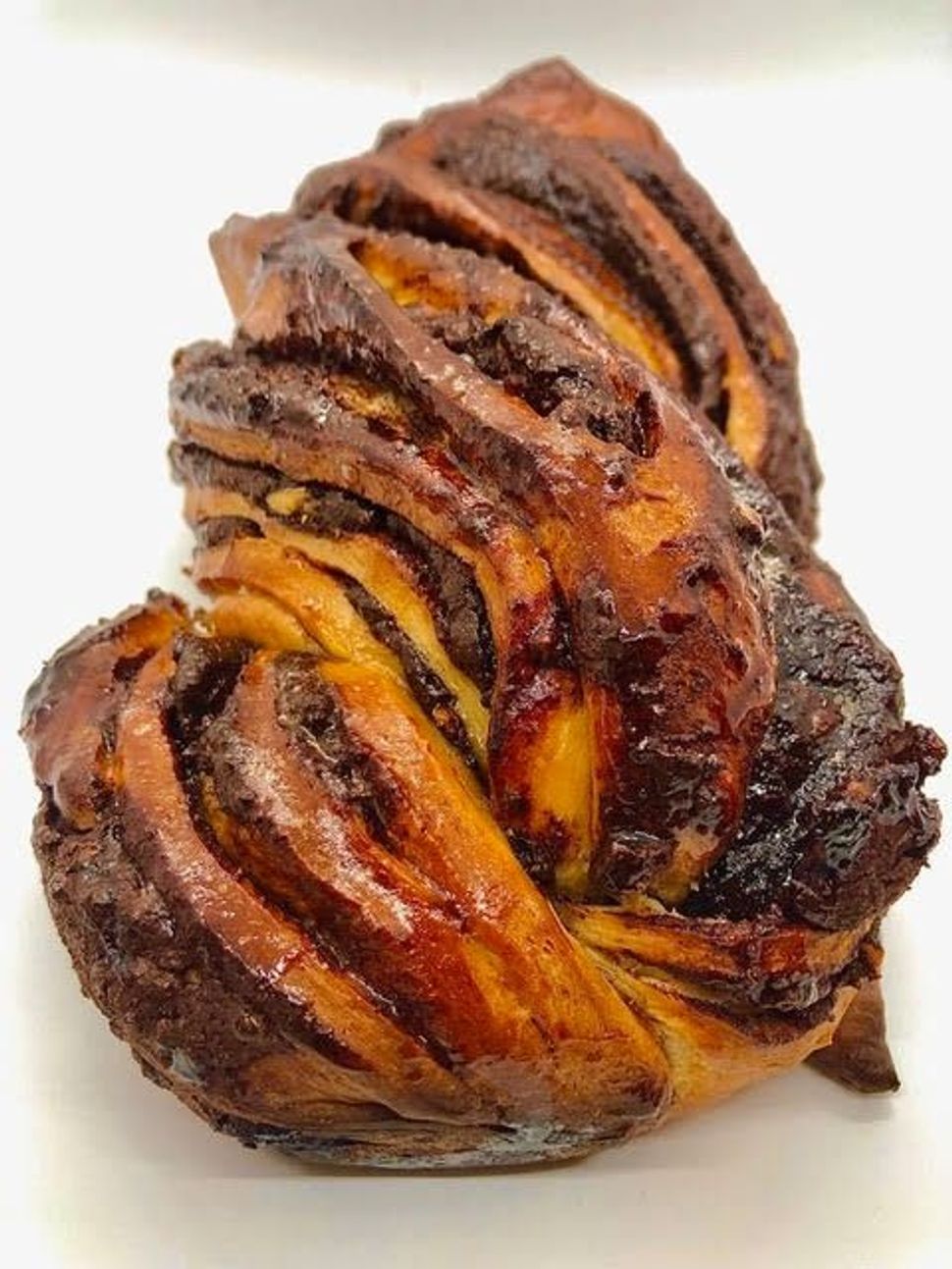 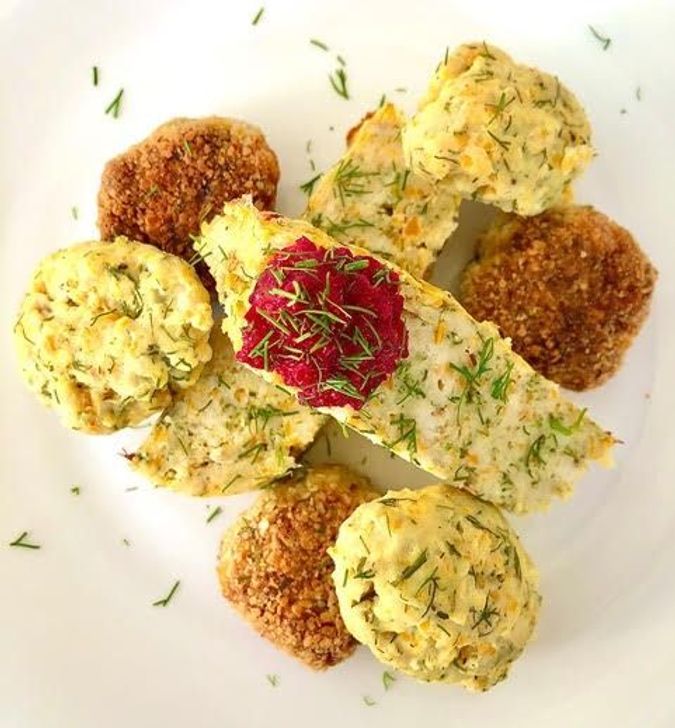 For some, it was sourdough. For Melina Schein, it involved a tongue.

Schein was among those choosing to spend their newfound pandemic hours in the kitchen in 2020. Though hers was a different sort of culinary pursuit than many we heard about; she set out to cook every single recipe in “The Jewish Cookbook,” the 2019 Phaidon release by Leah Koenig. Most cookbooks average around 100 recipes, this one has over 400—doing one a day would take over a year.

The result is “The Saucy Soprano,” a bright, shiny blog with a devoted following and an in-your-face approach to Jewish food. 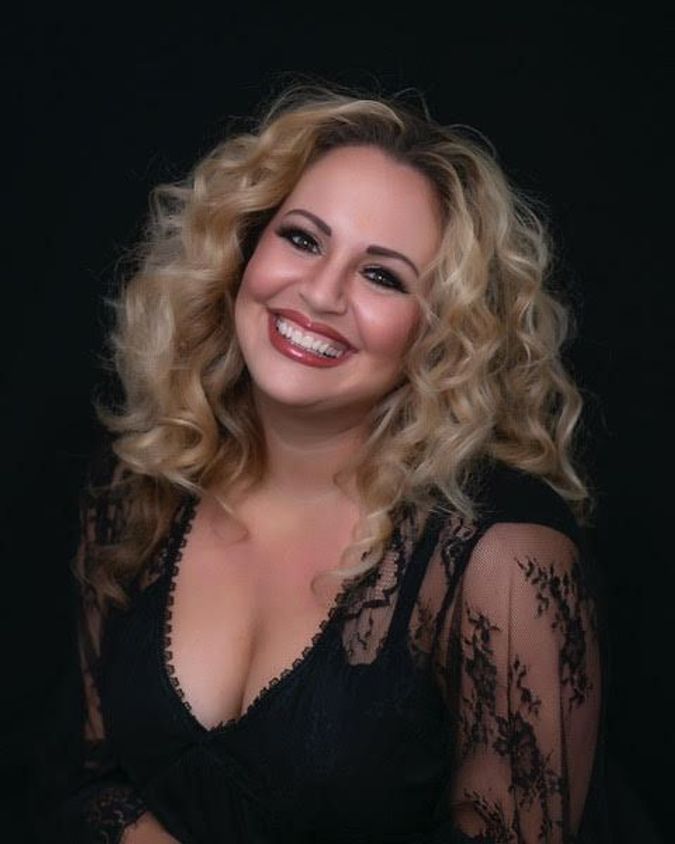 When she undertook her mission, Schein maybe, deliberately, forgot about the tongue recipe, in which, after cooking it for eight hours, she had to peel back the salivary glands.

Let no one say she does anything halfway.

“I know I err on the dramatic side at times as a performer, but I’m not being dramatic,” she said. “It haunted me for a week afterwards. I felt nauseous at times, I could still smell it in the house.”

Luckily there has been plenty of other deliciousness to make up for it.

Before the pandemic, Schein, 45, was an opera singer and theater company founder and director in her British Columbia city, Vernon, 300 miles East of Vancouver, Canada.

Born in Buenos Aires, she was raised in Manhattan and graduated both from the Fiorello H. LaGuardia High School of Music & Art and Julliard. She settled in the Okanagan Valley with her then-husband, and while the marriage didn’t last, her love for the region did (she has a son from her first marriage and is now remarried).

Her love of food goes all the way back to childhood. Her Argentine father was the cook of the family, and had a love of all cuisines Middle Eastern. Cooking shows were her favorite form of television. She once won a Food Network competition show called “Ready, Set, Cook,” and said she introduced biscotti to her area in British Columbia, starting a small side business selling them. 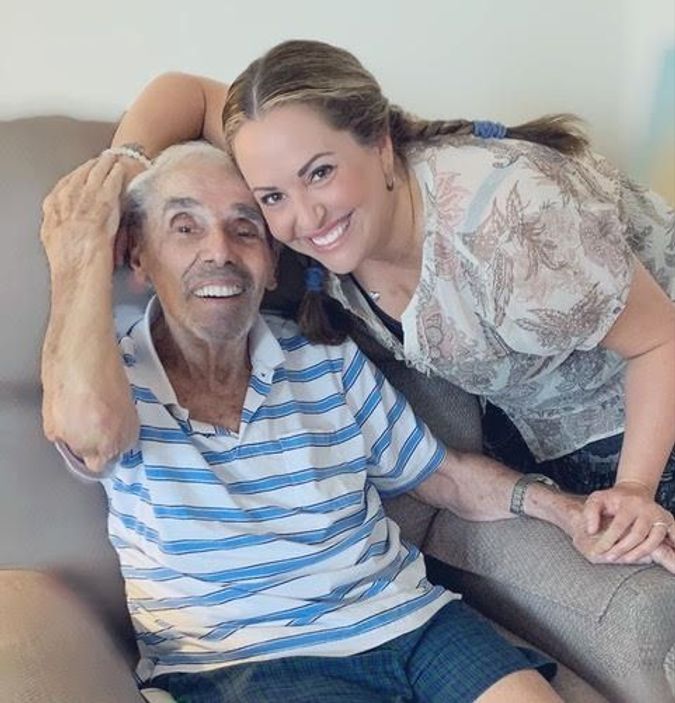 Schein with her grandfather Courtesy of Melina Schein

But until recently, the stage was her professional love, and in addition to performing widely, she founded a local theater company, which she directed until March, 2020. She has also served as a cantorial soloist in both Manhattan and in British Columbia.

While the pandemic served as a wakeup call for so many in different ways, Schein found herself fixating on the word “essential.”

“There was so much talk about what is deemed essential and what isn’t, and that was a huge identity crisis for me and continues to be,” she said. “Once the shock wore off, I thought about how being a performer is the only thing I’ve been trained to do. It’s crazy and scary how in an instant that was canceled and deemed non-essential.”

Streaming performances didn’t appeal to her; she felt the learning curve was too steep.

After taking the first few months to grieve – she was looking forward to touring internationally with an Andrew Lloyd Weber tribute – she thought about one of her favorite movies, “Julie and Julia,” based on a book of the same name about a woman who decides to cook her way through Julia Child’s “Mastering the Art of French Cooking,” and decided to follow suit.

Believing herself to be the only Jew within 50 miles was part of her motivation in choosing a Jewish cookbook. After extensive research, she landed on Koenig’s, as she wanted something encyclopedic in scope, with a modern twist. And that it had so many Sephardic recipes for dishes unfamiliar to her was also appealing. 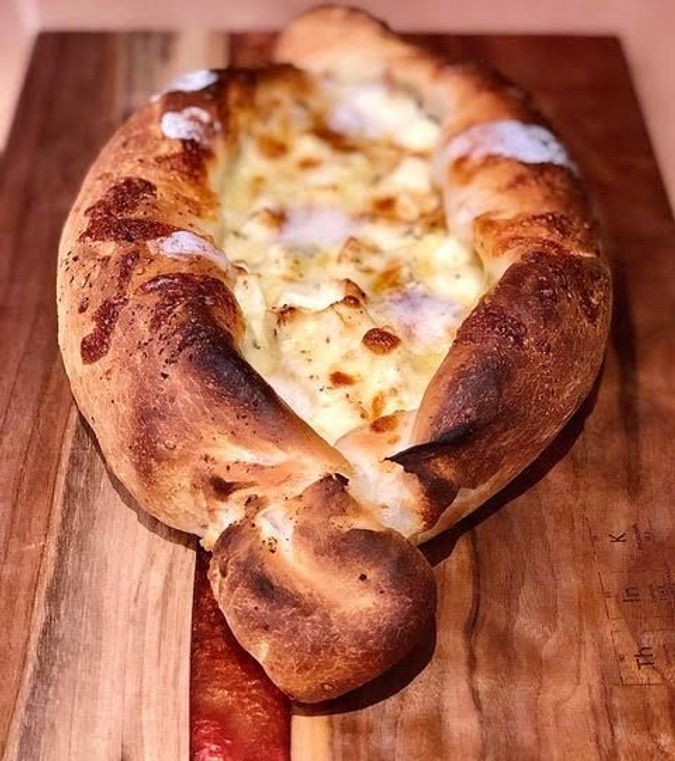 It was a chance, she figured, to reconnect with some of her Jewish culture and roots.

On June 1, 2020, she began doing one recipe a day. Though for the pickle recipes, she did all of them in one day. To her husband’s dismay, she decided to cook it in order.

That meant day after day of, for example, meat dishes; 20 chicken recipes – everything from doro wat from Ethiopia to an Iraqi chicken with almonds and red rice, followed by 23 red meat dishes. 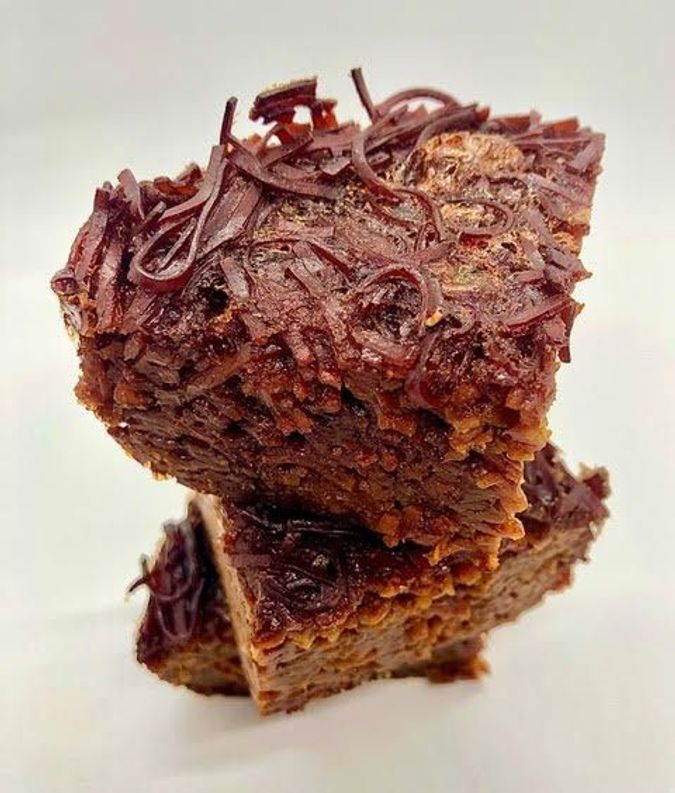 “I made 37 kugels in a row, and it took me 18 cholents,” she said, speaking of the traditional Ashkenazi Sabbath stew, “to realize I just don’t like cholent so much. There definitely have been some moments of Jewish food fatigue.”

She started a blog to track her progress: “The Saucy Soprano: An Out-of-Work Opera Singer’s Meshuggeneh Jewish Cooking Blog,” and even began a podcast, too, and, of course, posted on Instagram. She rates each recipe, giving it between one and five matzo balls.

At the end of the main dish chapter she writes:

“I couldn’t be more thrilled to stop bringing cow parts into my kitchen. And lamb parts. And chicken parts. Basically, all the parts of things that once had a face. And a mother.”

And about that tongue: The post is called “Holding my Tongue,” with an alternate title of “You’ve got to be f*cking kidding me.”

In some cases, she made a few videos, singing “My Yiddishe Mama” while stirring a pot of chicken soup.

She treated the enterprise like a job. It was her reason to get up in the morning – except that, of course, she made no money from it.

“It’s given me a sense of routine and purpose. I used to have this fascinating, vibrant life and now I make babka,” she said. 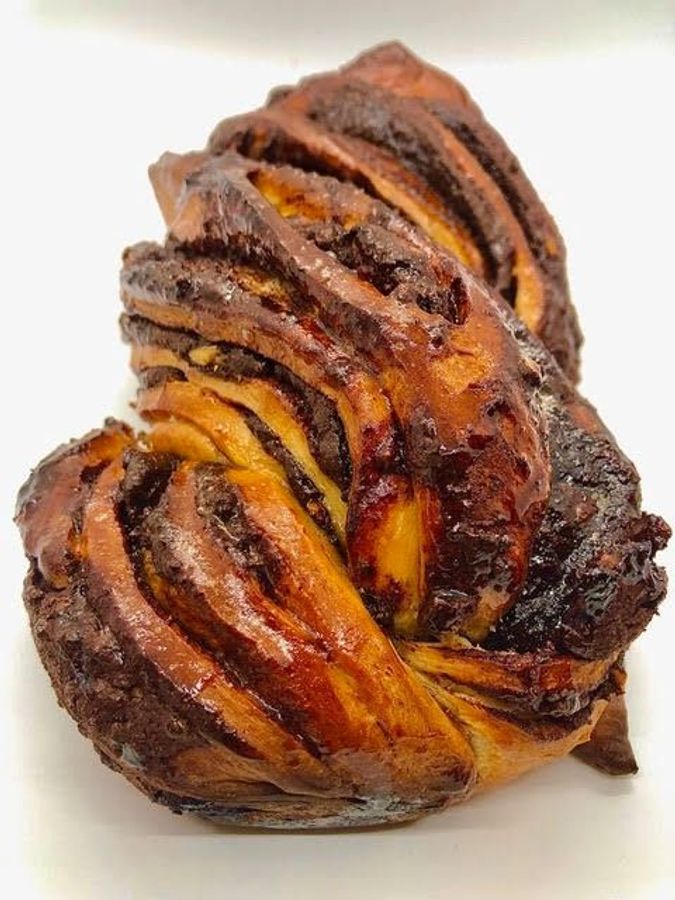 Since Koenig has only given a short introduction for each recipe, Schein has done her own research before writing her posts. Sometimes that includes talking to her mother or other family members about family versions of some recipes.

She has amassed readers and listeners along the way, and feels accountable to them in a different way than those who watched her perform.

“At first, I wondered, ‘why is anyone reading this other than my mother?’” she said, noticing that her audience grew as she went along. “Then I began feeling a real sense of responsibility to them because they’ve become my new kind of audience on a new kind of platform.”

She is grateful to have any kind of audience, especially now.

Her style is funny, at times schmaltzy and definitely engaging, with more than a bit of sexual innuendo. Like how she begins this post about sour cream coffee cake: “Whoever first came up with the idea of putting sour cream in cake, I want to kiss you. Like, on the lips. With tongue.” She can’t help it; it’s who she is.

“I admit I’m a little raunchy,” said Schein. “Leah wrote this wholesome Jewish cookbook and here I’m talking about sour cream and orgasms or whatever. Leah’s probably thinking ‘oh no,’ but that’s my style and I’m sticking to it.”

Raunchiness aside, Koenig calls herself a fan, and has been following along in admiration. Seeing her work through Schein’s eyes, words and photos has been a highlight of the pandemic for her, she said.

“Lots of people make my recipes and take pictures but she has this consistent style she’s developed,” said Koenig.

When I last checked in on her, Schein had made it to the dessert chapter and had babka in the oven as we spoke. When I asked how she would celebrate reaching the end, as it was now in sight, she said she wasn’t sure.

The last chapter is beverages, which Schein said, is a bit anti-climactic to finish on. She assumes she’ll finish in early July.

She has thought about how to monetize her efforts. She’s selling her own spice blends – though she knows that’s not her calling – and has asked for donations on her blog.

While she certainly hopes theater will return, she doesn’t know when it will be safe. She now looks at cookbooks differently, and thinks she may do the same with Marcella Hazan’s “The Essentials of Italian Cooking,” noting that as much as she’s an expert on challah and kugel now, expertise in pasta beckons.

About this project, though, she said, “If they ever make a movie out of it, I want to play myself.”