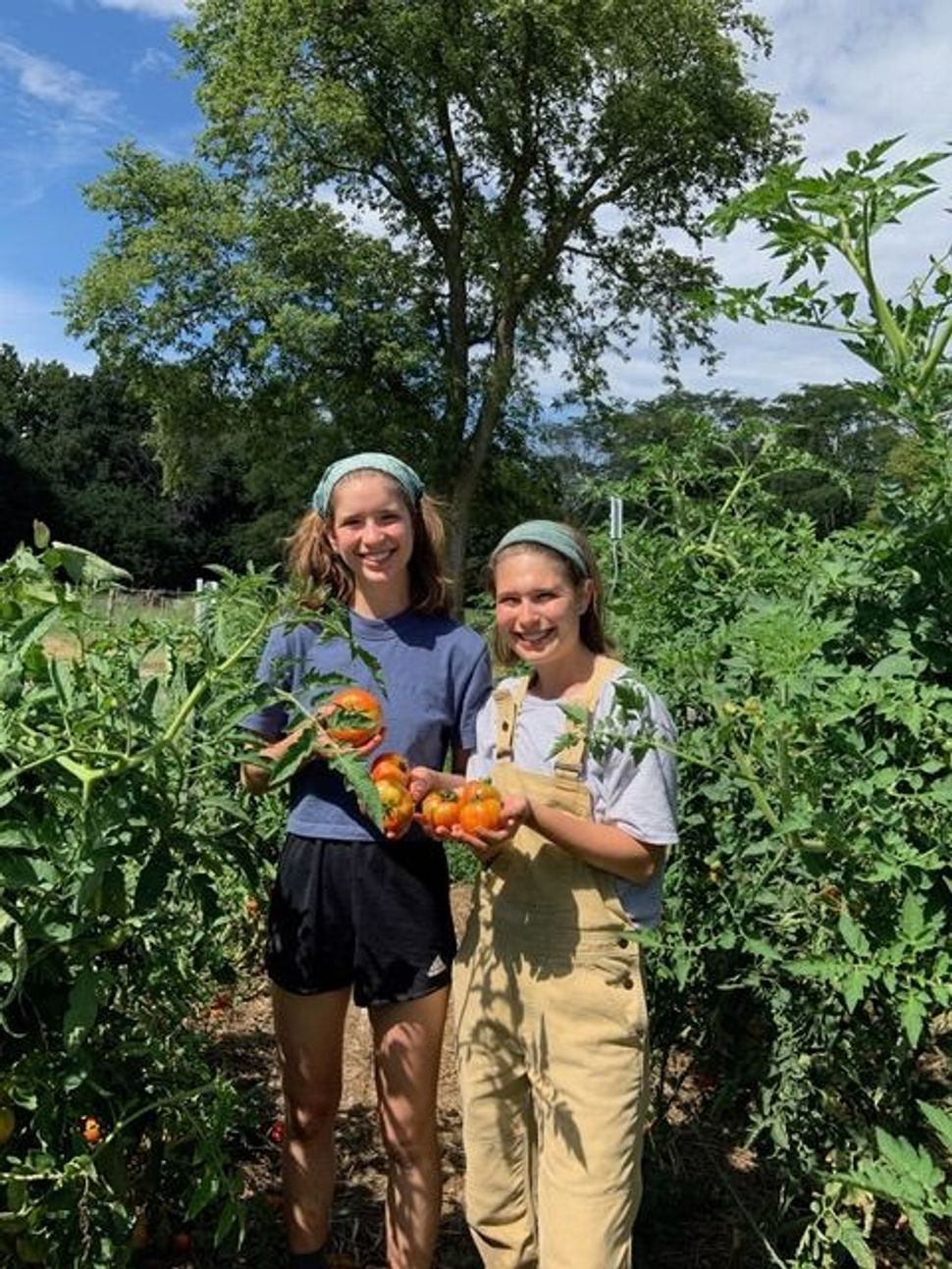 Remi and Gavi Welbel, on the farm. By Isabelle Davis

Appropriately appearing just before the harvest festival of Sukkot, this column marks the beginning of a series on farming and food from Remi and Gavi Welbel, who run Zumwalt Acres, a sustainable Jewish farm in Illinois.

Growing up, my sister and I often joked that our father thought asparagus could save the world.

Driving along stretches of highway in Chicago, he would remark that all median strips and roadside shoulders should be covered in asparagus.

“It will grow for at least 30 years, it requires minimal maintenance, and there could be literal tons of fresh asparagus available to the public,” he’d say.

Our father dreamed of converting the farm where he grew up from conventional to regenerative agriculture since college, so learning about permaculture, intensive rotational grazing, and beekeeping was an integral part of our upbringing.

My sister Gavi and I decided to take time away from college, her from Yale University and me from Middlebury College, to move to central Illinois and build a regenerative agriculture community on the land our family has farmed for generations.

Last year, at the height of the pandemic, we founded Zumwalt Acres, an organization rooted in Jewish values and dedicated to four main goals: growing food regeneratively, recognizing and honoring the indigenous history of regenerative practices, passing down Judaism’s rich agricultural history to empower the next generation of farmers and climate leaders, and contributing scientific efforts to combat the climate crisis.

We were fueled by the concept and practice of perenniality.

Perennial plants, like our father’s beloved asparagus, as well as rhubarb, berry shrubs, and fruit trees, grow back year after year. Unlike annuals which complete their life cycle in one season, perennials develop deep root systems that store water and spur microbial activity. They move in and create a home in the soil: absorbing toxins, preventing the establishment of invasive species, and storing nutrients.

The vision to build a perennial farm is multigenerational. Although in some ways the creation of Zumwalt Acres was unexpected, in many ways it was a 40-year dream in the making.

The land itself has a multigenerational history. On our father’s side of the family, my sister and I are the sixth generation of people in our family to farm this land that we are so fortunate to have access to. Everything we have built has come from a deep well of generational knowledge of the land and its history— knowing what species are native, what soil types lie beneath our feet, and what land has been left relatively untouched.

On our mother’s side, we are second-generation Americans descended from Holocaust survivors. As the first Jewish farmers on this land, we are also bringing another legacy of faith and farming.

In the Jewish community, we have passed down knowledge, values, traditions, recipes, and so much more for centuries. In many ways, Zumwalt Acres embodies this tenet of L’dor V’dor, from generation to generation. We are learning from ancient practices of land stewardship, such as shmita, pe’ah, and leket— and seeking meaningful ways to bring them into a modern farming context.

One way we practice pe’ah and leket , the ancient laws surrounding gifts of harvest to those in need, is by donating fresh produce to our local food pantry each week. Shmita is the Sabbath of the land in which we are commanded to allow the land to rest every seventh year. This year is a shmita year and, with guidance from the Jewish Farmer’s Network, we are designating a shmita plot of land that will be left fallow for the entire year.

As our father grew up in the 60’s, he witnessed the transition in Midwestern agriculture from farm hands, grazing animals, and polyculture, to a single farmer managing thousands of acres of industrialized soy and corn row crops.

He saw first-hand how the implementation of conventional chemical practices deteriorated the soil and eliminated biodiversity. During his years studying horticulture at University of Illinois, he grew more and more convinced of the necessity of cultivating organic agriculture that utilizes perennial and biodiverse crops to produce nutritious food and care for the land.

In a letter he wrote to his father after graduating college in 1980, he made a plea for investing in a more sustainable farming model.

“We could create a system of agriculture that would lay the groundwork for generations,” he pleaded, “ a system that would breathe life and health back into this ground.”

Although his dreams did not come to fruition while he raised my sisters and me in Chicago, he passed his dream onto us, and now, 40 some years later, we are making this collective dream come to fruition together.

To me, a better world is a perennial world. One in which we cultivate a diverse thriving community of people and plants that live in reciprocity with nature. A world that roots people and communities to grow stronger year after year. A world that works with, rather than against, nature to feed all its inhabitants. A world that celebrates biodiversity in our growing practices and diversity in our social practices. A world that seeks to restore the damage we have done and leave a livable planet for future generations.

The act of cultivating perennial agriculture does exactly that: it seeds plants that will nourish not only the planter, but the soil that will continue producing for those who come after.

This idea of perenniality harkens to Jewish teachings of environmental stewardship that were fundamental to my upbringing. One teaching from the text of the Talmud tractate Kedoshim states, “Even if the land is full of all good things, still you must plant… even if you are old, you must plant. Just as you found trees planted by others, you must plant them for your children” (Midrash Tanchuma, Kedoshim 8).

During our first planting season this spring, as I sat in an asparagus trench planting seedlings with my father, sister, and a group of young farm apprentices, I too felt like asparagus just might change the world.

As we transition from Rosh Hashannah and Yom Kippur into the harvest holiday of Sukkot, it is a beautiful time to reflect on our relationship with the land. Especially as we enter the shmita year, we must honor the Jewish imperative to give back to the Earth.

At the farm, we will be celebrating with singing, dancing, music, ritual, farm-to-table meals in the Sukkah —including this zero-waste Sukkot salad — and sleeping under the stars.