Can a bacon and bagel sandwich still count as Jewish food? Edith’s, a speciality grocery store and sit-down eatery coming soon to Brooklyn, will serve traditional dishes from Jewish communities all around the world, reinterpreted.

Take, for instance, Edith’s pasta amatriciana, which substitutes beef tongue for cured pork cheek, just like they did in the Roman Jewish ghetto. But Edith’s soaks the beef in milk, something kosher law prohibits.

At the current iteration of Edith’s, you can order “The Maghreb,” a sandwich with Moroccan merguez lamb sausage and harissa, served on a raisin bagel with raisins soaked in arak. Heller said the touch of sweetness is a nod to Moroccan tagine. You can order sabich, the Iraqi fried eggplant and boiled egg sandwich, as well as a bagel and lox.

“When people think about Jewish food, it’s Ashkenazi food or it’s Israeli food. But there’s so much from around the entire Jewish diaspora,” Heller, a Chicago native, said. “There was just a lot of storytelling that I felt like was being missed.”

Edith’s, named for Heller’s great aunt who ran a Jewish delicatessen in Brooklyn in the 1950s, first opened in August 2020 as a pop-up in Greenpoint, hosted at Paulie Gee’s pizzeria— pizza ovens were a key ingredient for executing Heller’s vision for wood-fired bagels. It then opened a small permanent location in Williamsburg in April this year. The pop-up opened when nearly 90% of New York City bars and restaurants couldn’t make rent, but boasted hour-plus lines snaking down the street and sold out each day. 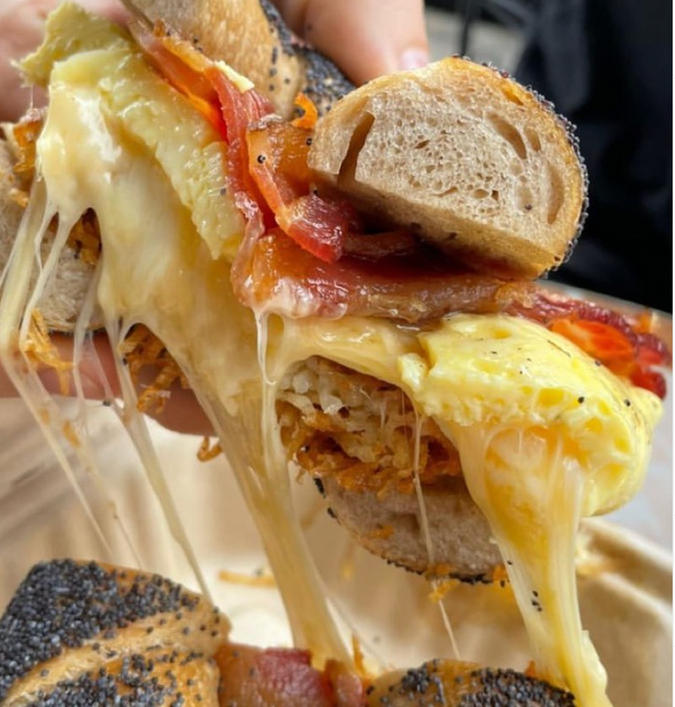 The counter pushes up against all expectations: the restaurant opened as a pop-up six months into a pandemic, in a male-dominated industry, it’s run by women, and it’s far from kosher.

To help execute her vision to “explore the classics in a new way,” Heller, who’s worked in the food industry for over a decade, including for Momofuku’s Milk Bar, hired Christina Jackson, former chef de cuisine at Tetsu in Tribeca. The female duo found “unexpected synergies” between Jackson’s culinary background — a career chef from Tokyo and San Francisco trained in sushi — and the smoked fish Heller wanted to serve.

But if there’s one menu star, it’s the Instagrammable BECL — bacon, egg, and cheese bagel with a latke. The homage to the venerated New York bodega sandwich flouts pretty much every rule of the halachic laws of eating: pork, milk and cheese, all in one big bite.

That dish—and Edith’s—begs the question: just what is “Jewish food”— and does a bacon-bagel sandwich stretch it beyond the breaking point? “That to me is anathema,” said Tina Wasserman, culinary historian and author of “Entree to Judaism: A Culinary Exploration of the Jewish Diaspora.”

Wasserman said that while a Reuben sandwich, with its pastrami and Swiss cheese, might get a pass as Jewish cuisine, bacon is a hard no.

“I mean, that shows no respect for the different foods of the diaspora. Just because they’re sticking it on a bagel doesn’t cut it, thank you very much,” she said. “Don’t call it Jewish food.”

According to Wasserman, Jewish diaspora cuisine is food from any region of the world that conforms to kashrut and the laws of Shabbat. Whether it’s chicken chitarnee, an Indian Jewish curry, or borscht from Russia, she said what constitutes Jewish cooking is that the recipes are sans pork and don’t combine meat and milk.

But unlike other restaurants that intentionally defy kosher law, like Traif in Williamsburg, whose name translates to “non-kosher” in Yiddish, Edith’s is not so much a shrine to pork as it is an invitation to global Jewish fare. Heller’s vision is to offer Jewish food in all its variety and complexity, which includes contemporary non-kosher takes.

So, the eatery dips in and out of tradition.

For Passover, the Edith’s staff cranked out wood-fired shmurah matzah — flat and round — along with their famous bagels (bread crumbs swept out between batches). A few streets over, Orthodox communities burned chametz, foods with leavening agents that are verboten during the holiday. It was a cheeky move for the new deli on the block.

For Thanksgiving, Edith’s will offer schmaltzy chicken pot pie. Pie has never been a dessert for Jewish holidays or celebrations, the restaurant posted on social media, but everyone eats pie on Thanksgiving. For Christmas, expect a special menu of turnip and edamame fried rice with crispy spring rolls, honoring the century-old Jewish ritual of eating Chinese food for Christ’s birth. For Purim, Edith’s celebrated with crown-shaped halva croissants to laud Queen Esther — shifting the focus away from male villain Haman, whose hamantaschen typically outshines other culinary representations.

“I thought that we could be this new voice in an industry that hasn’t seen a lot of change,” Heller said.

Part of that change comes down to who’s running the show. Of the 460,000 chefs and head cooks in the United States, 77.6% are male, according to the Bureau of Labor Statistics. For big name U.S. restaurant operators, the gender gap is even wider: women occupy less than 7% of head chef positions, according to a Bloomberg study that analyzed 15 prominent restaurant groups. Even rarer is the Jewish female restaurateur, a role Heller and her late great aunt Edith share.

Edith Heller ran her Brooklyn deli — called “Frank’s Delicatessen” after the previous owner, a name she kept — from 1949-1953.

“She hated it,” Elyssa Heller said of her great aunt. “It was back-breaking labor. She ended up closing up shop and moving to Florida.”

To deli scholar Ted Merwin, Edith’s represents a continuation, not a revolution, in the Jewish restaurant.

Women always played a large role in day-to-day operations of American Jewish delis, said Merwin, a Judaic studies historian and author of “Pastrami on Rye: An Overstuffed History of the Jewish Deli.” They cooked, they managed the cash register, and once takeaway stores turned into restaurants with tables, they served lunch and washed dishes.

“But were there women who actually opened the deli all by themselves? No, not that many,” Merwin said.

The grueling hours of the restaurant industry meant arduous labor for women running a business and taking care of a family in an era when many dining establishments only served men.

And what about the bacon on the bagel?

The pattern started with delicatessens in New York City’s theater district, where Jews who worked in the entertainment industry tended to be less religious. Their secularism was reflected in the non-kosher offerings at the delis around Broadway.

Though the U.S. restaurant industry tanked during the Great Depression, Jewish delis thrived. According to Merwin, with 1,550 kosher delicatessens across the five boroughs of New York City at the height of the Great Depression, the deli was a rare Depression-era success story. Delis doubled as a lunchtime spot for an affordable meal as well as a gathering space for Jews to lean on one another in times of hardship.

And like these delis, Edith’s is flourishing. Hand-twisted and wood-fired Polish-style obwarzanek krakowski keep Brooklyners coming back and lining up down the block while restaurants are closing in droves.

Like the delis of the 1930s, Heller says she made a point to price Edith’s competitively, if not under what some other restaurants charge. 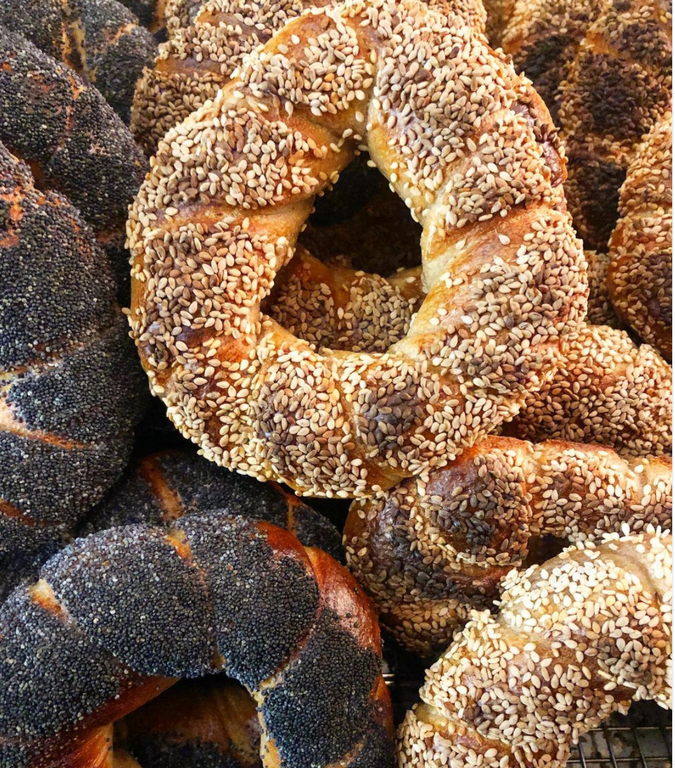 “When I first moved to New York I was homesick and always wanted a bagel with lox from Russ & Daughters but I could never afford to spend, like, $16,” she said.

The Edith’s version, topped with homemade cultured cream cheese and in-house smoked salmon, will set you back $10.50, or $14.25 with the works.

Heller, who started Edith’s as an act of faith, unsure if people would “get it,” said she has been amazed by the response. Her approach to Jewish food generated enough interest to grow from pop-up to sandwich counter, and now the soon-to-be bigger second location.

The new Edith’s food hall and market, which she described as “a Jewish Eataly,” will have a prepared foods section, bakery, deli counter, full espresso program, and sit-down restaurant with Ashkenazi classics, consumer food products made by Jewish Mexican women, Indian Jewish goods— and every Jewish diaspora group in between.

“Food is humanity,” said Heller, who is also launching a zine with stories and recipes from the Edith’s community. “It’s been a bright spot in a really tough time.”

Can a bacon and bagel sandwich still count as Jewish food?