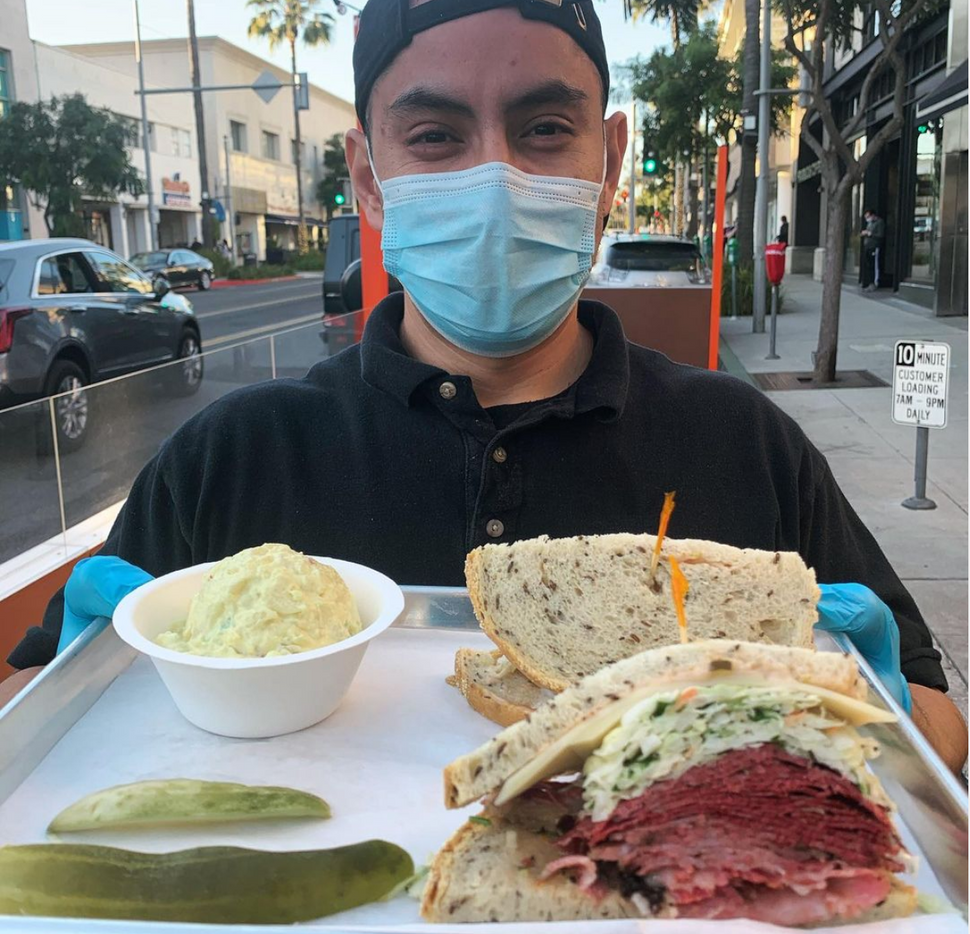 An employee of Nate ‘n Al’s in Beverly Hills offers up pandemic pastrami. By @natenal 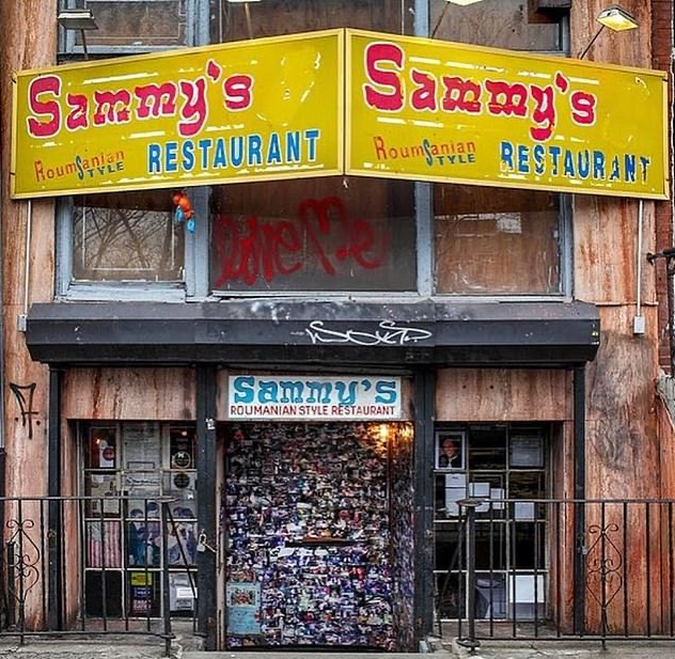 “Once this whole thing is over,” my father declared, early in January, “one of the first places we have to go is to Sammy’s!”

He was speaking, of course, about Sammy’s Roumanian Steakhouse, the legendary restaurant on New York’s Lower East Side known for its chopped liver, garlicky karnatzel and blackened skirt steaks, leaden latkes, frozen vodka, and a bacchanalian atmosphere that was one part Catskills, one part “Animal House.”

My father, a proud descendent of Romanian garmentos and garlic lovers, had never been to Sammy’s, despite the fact that it contained everything he loved under one roof. And so, whenever I would walk by him in one of my many Sammy’s t-shirts, he’d inevitably state how we had to go there.

“Sorry to break it to you Dad,” I told him with a sad look, “but Sammy’s is done.” I had just heard the news minutes before, and my phone was already filling up with texts of bewilderment from fellow Jewish food writers, New York natives, and those I’d shared epic nights with at Sammy’s. My father was crestfallen. He muttered a single F-word, walked to the fridge, and ate some pickles…like his tongue needed to sit its own briny shiva.

At this point, we all know someone who has lost a loved one to the virus, or been hospitalized with severe symptoms, or pushed over the brink of their mental well-being. The economic cost has been no less severe, especially for the small, family-owned businesses that describe most Jewish cultural establishments…the restaurants, delicatessens, bakeries, and other eateries that are struggling to survive a year-long blow to business. 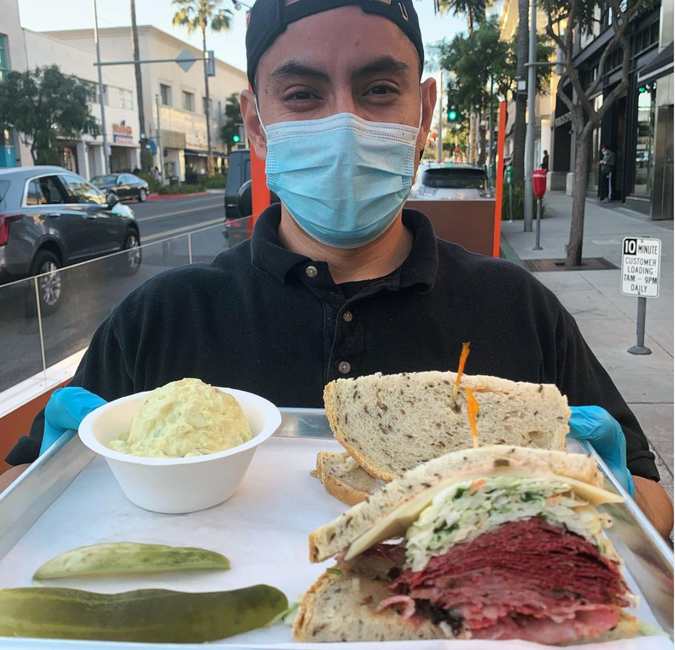 An employee of Nate ‘n Al’s in Beverly Hills offers up pandemic pastrami. By @natenal

The list of victims continues to grow: Label’s Table, Jerry’s, and soon Nate N’ Al in Los Angeles. Moishe’s steakhouse in Montreal (a refined equivalent of Sammy’s), Zaidy’s in Denver, Hamsah Mediterranean Grill (kosher) in Pittsburgh, and Mile End in Birmingham, Alabama. In New York, the spiritual home of Jewish nosheries, Jay and Lloyd’s and Pastrami Masters both went dark in Brooklyn, while the tiny, beloved B&H Dairy hangs on by its fingernails.

The reasons are the same everywhere: lockdowns that have shut all indoor dining, restrictions that have curtailed capacity, staff laid low by the virus, a recession like no other in memory. Regulations change without warning, and Jewish food businesses have to decide each time whether to invest thousands of dollars to rapidly adapt (ie: build a heated patio), or whether to wait and see if there’s even a point (like here in Toronto, when the patios were closed weeks after they’d opened).

Add to that the predatory pricing of UberEats and other app-based deliver platforms, and you have the perfect recipe for disaster. Even in the best-case scenario, these places are just hoping to survive.

But for those that don’t survive, like Sammy’s and the dozens of others lost so far this year, what have we lost, beyond the quantifiable economic measures of a business (jobs, taxes, an investment)? That’s the question I tried to answer when I started writing my book Save the Deli fifteen years ago, and it’s the one I think about every time a Jewish food business closes its doors for good.

Join the conversation: David Sax, the author of this article and of the 2010 book “Save the Deli” will talk with Rob Eshman, the Forward’s food editor, about why so many delis are facing extinction, what we lose when they’re gone, and whether they can ever be replaced. Feb 17 at 2 p.m. ET, 11 a.m. PT Click here to register. Is this the most important Zoominar of the whole pandemic? Yes, it is.

The first thing we lose is a physical space that has become, in its own way, a tactile Jewish Place. Sammy’s Roumanian Steakhouse was, to put it kindly, a shithole: a dark windowless basement with bad plumbing, shmutz-encrusted ceiling tiles with all the charm of a bus terminal…and yet, on any given night, it was the most glamorous spot in Manhattan, packed with everyone from power brokers and celebrities partying their faces off, to Zaidy’s from Long Island, soaking up fading memories.

Who would choose a bouquet of gardenias as a centerpiece, when a sticky syrup bottle of chicken fat would do? What could sound sweeter than the screeching voice of Dani Lubnitzki pounding out the hora on his worn keyboard? 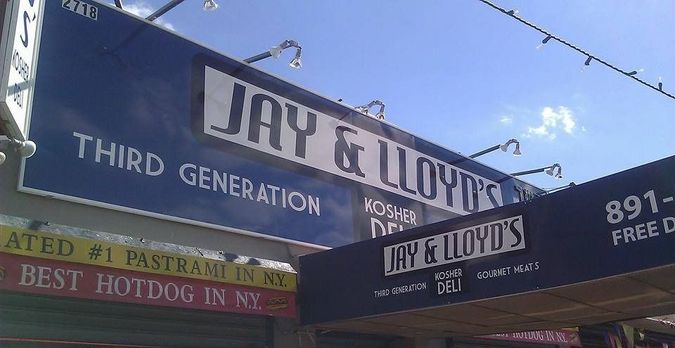 The next thing we lose are people. The owners who kibbitz. The servers who sling attitude along with salami. The regulars, like the recently departed Larry King, who held court at Nate n’ Al for decades in his suspenders with his crew of childhood friends. A Jewish eatery, by definition, will attract Jews, and a room filled with Jews will feel and sound unquestionably Jewish.

Speaking to the Detroit News recently, local Stage Deli owner Steve Goldenberg explained that one of the reasons he was only open for takeout, rather than indoor dining at limited capacity, was because “it’s very difficult to accomplish Jewish deli energy with 25% occupancy.”

A few weeks back, as I stood in line at Toronto’s Harbord bakery to buy challah, I listened with a tremendous sense of pleasure as an elderly woman energetically complained about how she had driven all the way from uptown, only to find out they were sold out of her favorite poppy seed danish. Never mind that it was a pandemic, and the staff were working under incredible stress, and everyone else was just grateful to get their challah…she would not move until her kvetch was recorded, as is her God given right!

Beyond the synagogues, schools, and community centers, our eateries are the most recognizable and accessible entry points into the community. They are where we meet with other Jews, where we go to feel Jewish, where we get the food for our life-cycle events…from the bris to the shiva. When they close, our community is instantly a lesser version of what it was.

My enduring memory of Sammy’s is the celebration we threw there for my friend Chris Farber, after his formal conversion to conservative Judaism (his father is Jewish). The hangover from ‘The Farbmitzvah’ lasts to this day, but no one else will get to celebrate their second circumcision there, and that’s a tragedy. 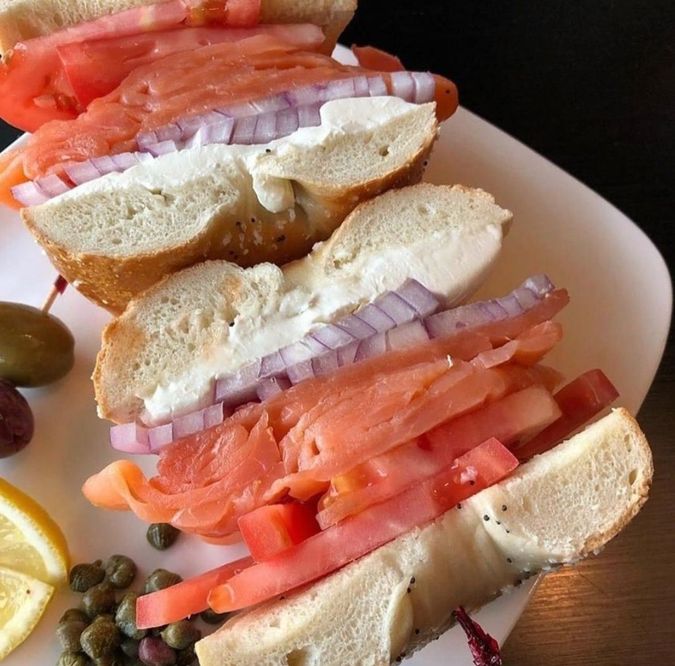 Finally, there’s the food. Outside the home, a Jewish eatery is the one place where the foods that link our traditions, history, and dietary evolution live. Often, they are the only places where they do. Even if the menu items are similar, each makes their food in its own way, and that taste cannot be replicated when it is gone.

Many have tried to emulate the peerless chopped liver from Sammy’s Roumanian, redolent with fried onions, egg, spicy radish, and a streaming cascade of schmaltz, tossed together tableside with a theatrical flourish, like a carnivorous salad. None get it right.

Decades after they closed, people still talk about the onion buns from New York’s Ratner’s, the danish from Miami’s Rascal House, and the rib steaks from Montreal’s Brown Derby with the longing for departed loved ones who can never come back.

Of course, most Jewish eateries will emerge from the pandemic. We are, after all, a people who know how to survive, and we have endured worse. Some, like Sammy’s, are quietly hinting at reopening, in some form, and already we are seeing the green shoots of the next generation of Jewish eateries.

The Nosh is opening in St. Petersburg, Florida; Atlanta’s General Muir is expanding; and in Pittsburg, chef Jonathan Barr decided to open a deli food truck early in the pandemic after losing his job at a fine dining restaurant. Others are appearing in London, San Francisco, and Chicago, bringing a new take on what Jewish food means to them and their communities.

I suppose the old adage about Jewish holidays rings true here: They tried to kill us, we survived, let’s eat. But before we do, let’s remember what we lose if our eateries vanish, and maybe order a meal or a dozen bagels from the one you love, so that it’s still there when this is all over.

David Sax is a Toronto-based writer and author of the 2010 book “Save the Deli.” Join him and Rob Eshman, the Forward’s national editor, for a Zoominar about “Kaddish for Knishes: The Uncertain Future of the Jewish Deli” on Feb. 17 at 2 p.m. ET, 11 a.m. PT. Sign up here.