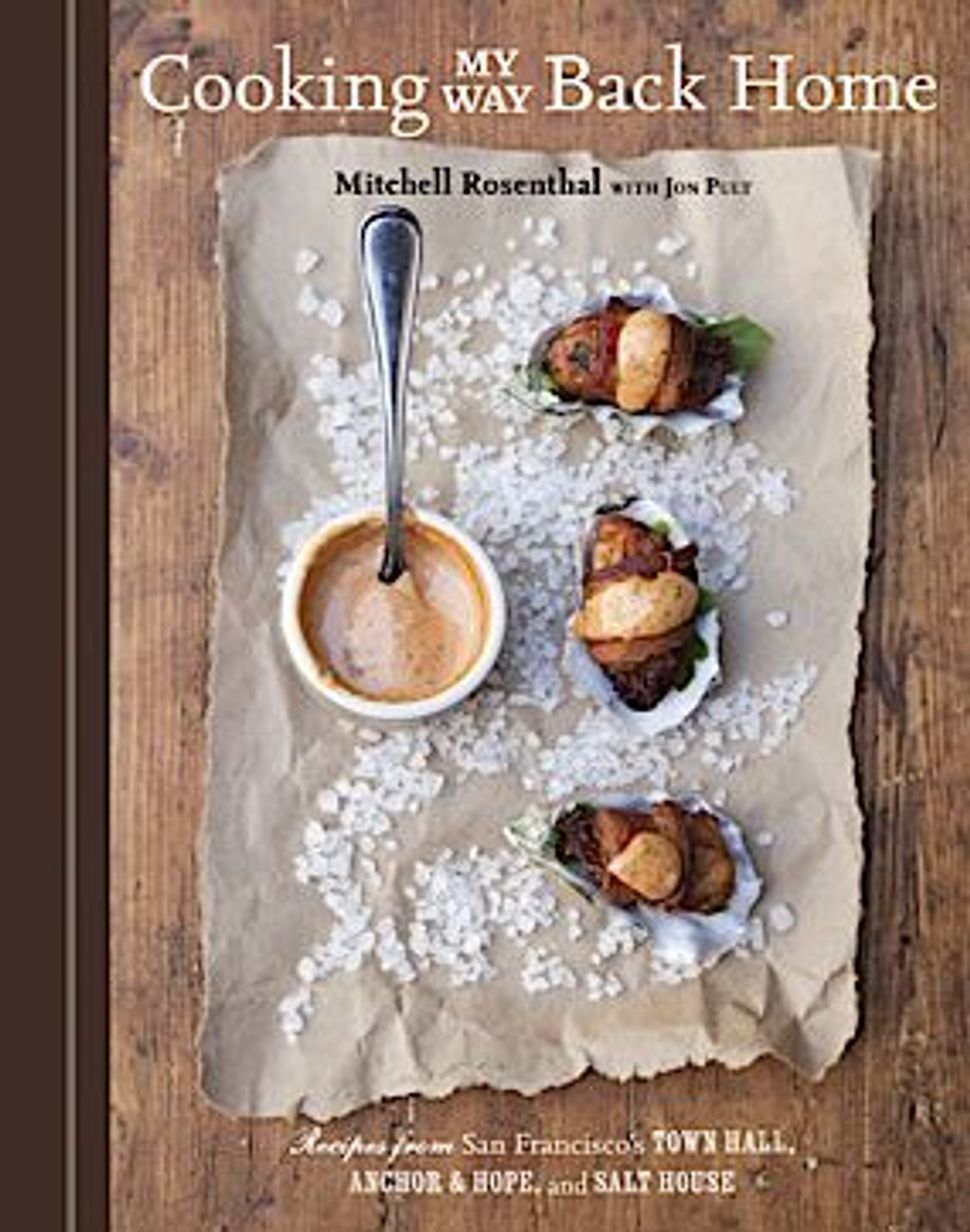 Image by Courtesy of Published by Ten Speed Press, a division of Random House

Some know chef Mitchell Rosenthal from his favorably reviewed Town Hall, Anchor & Hope, and Salt House restaurants in San Francisco. Others associate him with his many years working with famous names like Paul Prudhomme and Wolfgang Puck. But what few know, is that Rosenthal got his start cooking traditional Jewish food at (the recently closed) Jack Cooper’s Celebrity Delicatessen in New Jersey.

“That’s where I started. Jewish recipes are the foundation,” he told The Jew in the Carrot in a phone interview about his new cookbook, “Cooking My Way Back Home.” The book contains recipes for dishes served at Rosenthal’s restaurants, but ones that can be easily executed by an amateur cook in a home kitchen. The book’s 100 recipes — reflecting Town Hall’s southern flair, the more contemporary approach of Salt House, and Anchor & Hope’s emphasis on fresh seafood — highlight Rosenthal’s preference for bold flavors and contrasting textures. These are “recipes that are from all the experiences I have had,” Rosenthal explained. They’re not specific to one cuisine. “I don’t like to be put into a box,” he asserted.

Rosenthal surprises readers by not attributing the Jewish recipes to either his mother or grandmother. “The only person in my family who cooked that way was my Orthodox grandfather Eli, but he never let us help him,” Rosenthal said. All my Jewish cooking experience was really learned from the Greek chef, Tom Plaganis, in the Jewish deli in Jersey.” Rosenthal, now 51, started there at age 15 as a pot washer and learned how to cook over the eight years he stayed there. He even went back for another short stint in the deli’s kitchen a few years later, after having studied with Prudhomme in New Orleans.

Rosenthal instructs his readers to make latkes the way he learned to make them from Plaganis — with a high onion-to-potato ratio, and the “shallow fry” method for cooking. “The high onion content really boosts the flavor, but it also adds to the moisture, which has to be squeezed out,” he warned. “And the big mistake people make in cooking latkes is that they don’t use enough oil. It should be a fry, not a sauté. The oil in the pan needs to be half as deep as the height of the latke,” the chef instructed.

Rosenthal tells a funny story in “Cooking My Way Back Home” about how he remembered an Israeli coworker at the Celebrity Deli making great falafel, but he couldn’t remember the man’s name, or his recipe. Fortunately, when Rosenthal told his brother Steven (who co-owns his restaurants) that he wanted to include the falafel recipe — which called for more herbs than do most falafel recipes — in the cookbook, his brother recalled having written it down and was able to find it. But neither of them could remember the coworker’s name, so they just called the recipe, “The Israeli Guy’s Falafel Sandwich.”

The one nod that Rosenthal makes to family recipes comes with chopped liver. “Our recipe is really a bastardization of my grandmother’s recipe and that of the deli’s.” According to Rosenthal, what sets this chopped liver apart from others is that it calls for caramelizing both the chicken livers and the onions. “Really cooking the onions to draw out the sugar is really key to getting the sweetness that sets this recipe apart,” he said.

Chopped liver is clearly not just chopped liver to Rosenthal. “When we make chopped liver, I would critique it as much as anything I would make,” the highly accomplished chef explained. “I don’t judge food. There is no hierarchy. I think of things as different, not better, and I take the same care with everything I make.” He didn’t learn that from the celebrity chefs he trained with. “I learned that back at the Jewish deli. The chef there had as much pride in his food as any of the great cooks I have worked with.”

1) In a frying pan, heat 2 tablespoons of the oil over high heat. Add the livers and sauté for about 5 minutes, or until well caramelized and cooked through. Transfer to a bowl and place in the refrigerator.

3) Pass the chilled livers, onion and oil, and hard-boiled egg through a meat grinder fitted with the medium disk or the food grinder attachment of a stand mixer fitted with the coarse blade into a bowl. If you don’t have a meat grinder, you can chop the ingredients by hand, preferably with a crescent knife (curved blade with a handle on either end). Mix the ground ingredients together well, season with salt and pepper, and serve.