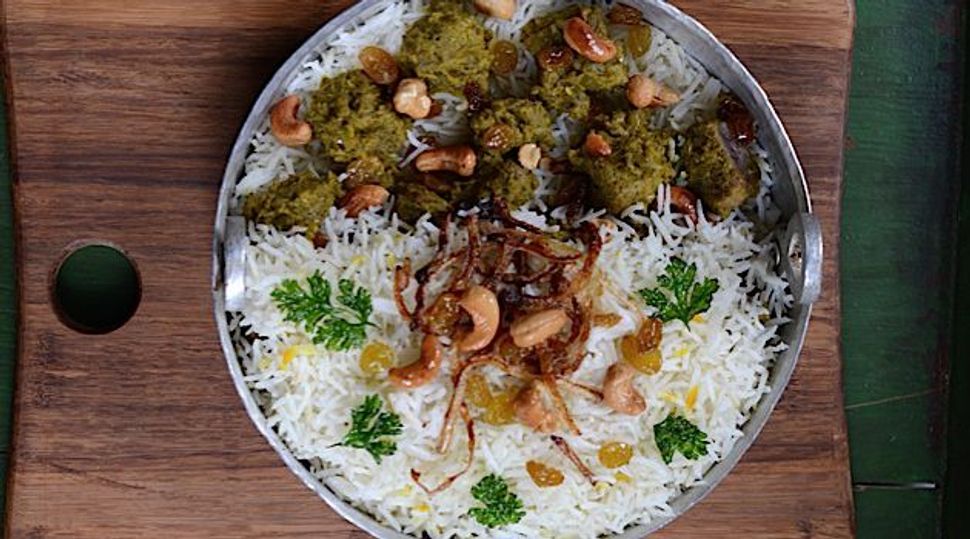 Flavors of the East: The juxtaposition of sweet and savory flavors, crunchy and soft textures and multitude of color creates a festive dish that became a Rosh Hashanah tradition. Image by Shulie Madnick

As I contemplated my Rosh Hashanah dinner this year, memories of my childhood growing up in Israel came sweeping over me. On the eve of Rosh Hashanah, in the afternoon hours, my mom would send my siblings and me to make a quick run to the corner grocer before the owner closed down the shop. Her most frequent request was for extra onions to crisp as the garnish for the lamb biryani, a traditional Indian rice and lamb dish she always prepared for our Rosh Hashanah feast.

Along with 60,000 other Indian Jews from the B’nai Israel community, my parents moved from Mumbai to Israel around 1960. Our community, which is believed to be one of the lost tribes of Israel, is 2000 years old, having arrived in India when our ancestors were shipwrecked on the Konkan coast, south of modern-day Mumbai.

While my parents and other Indian immigrants in Israel adapted to Western Rosh Hashanah customs like serving apples and honey and a whole fish, the Rosh Hashanah eve dinner remained an Indian feast, with a luxurious lamb biryani at the center of it. In the dish, the rice is infused with saffron and then layered with curry-spiced leg of lamb, nuts, raisins, crispy onions and cilantro chips. The juxtaposition of sweet and savory flavors, crunchy and soft textures and multitude of color creates a festive dish that became a Rosh Hashanah tradition.

Biryani is originally Persian, and was brought by the Arabs and Mongols to India. Over the centuries, the native Indian communities adopted the dish and made it their own. Although ghee, or clarified butter, and yogurt are often used in the dish, Indian Jews replaced those dairy ingredients with vegetable oil to create a kosher rendition.

Some of the preparations for this dish can be made a couple of days in advance, with the whole dish fully assembled a day or two ahead. It seasons well over time. It can also be served deconstructed, though it’s best when preassembled, so that the flavors are allowed to marry.

This year for our Rosh Hashanah feast I am carrying on my mom’s traditions. Most of the biryani is now frozen (rice and lamb separately), as I prepared it early for this article. I will thaw the rice and lamb a couple of days ahead of the holiday, cook the garnishes on the day and assemble for a feast.

A note: This recipe is long, but the steps are not particularly difficult. Take it piece by piece so it doesn’t overwhelm you and you will be rewarded for your effort.

Cook rice in a rice cooker according to manufacturer’s directions, adding salt, a few strands of saffron and water.

If you don’t have a rice cooker, begin by rinsing and draining rice. In a pan, heat up two tablespoons oil on medium heat, add the rice and lightly fry. Mix gently. Add salt, a few strands of saffron and water. Bring to a boil, mix and immediately turn down heat to lowest stove top setting. Cover with a lid and let water completely absorb. Turn off stove and let rice sit with lid on for at least 20 minutes. Gently fluff the rice with a fork to separate the grains. You can make the rice a day ahead and reheat in a microwave or oven.

Cook lamb in a pressure cooker according to manufacturer’s directions with salt, bay leaves, allspice and water.

Alternatively, bring lamb and water to a boil on the stove top in a large pot with salt, bay leaves, allspice and water; then immediately turn down to low-medium simmering/bubbling. Skim the foam. Half-cover with a lid and let cook for about 1 1⁄2 hours, or until lamb is tender and falls apart at the touch of a fork. It will be pretty pink inside. Drain liquid just before adding the lamb masala below. 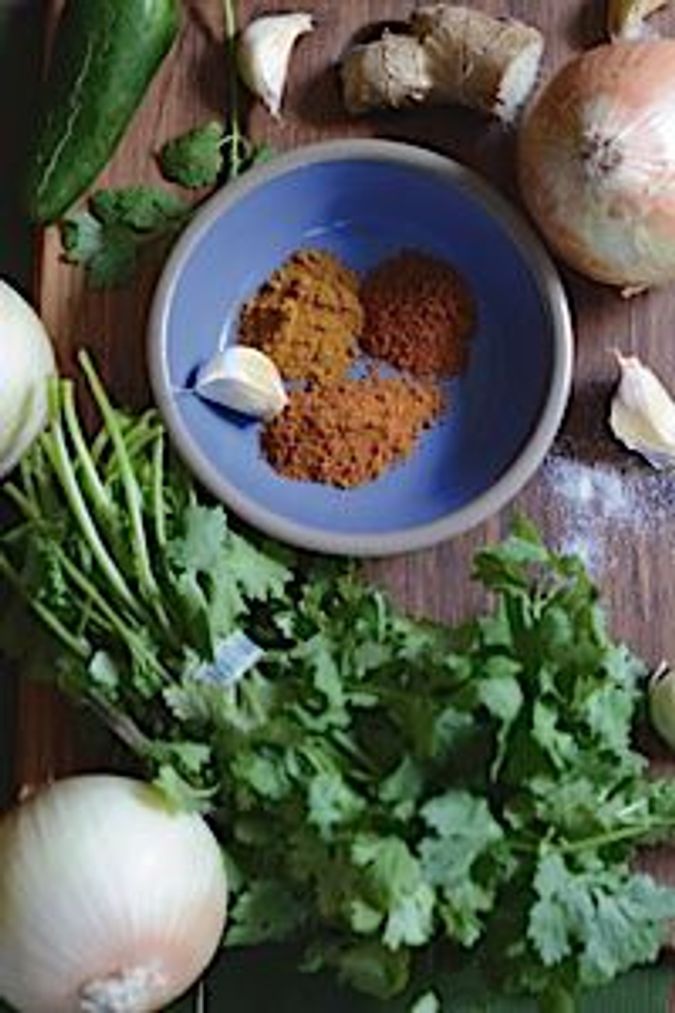 In a pot on the stove top, add the oil and onions and caramelize onions over medium heat until deep gold, stirring occasionally. While onions are caramelizing, put the garlic, ginger, cilantro and chili pepper into the food processor and chop to superfine consistency. Scrape the sides of and whiz again. Once the onions have caramelized, add the green mixture and cook on medium heat for few minutes, stirring occasionally. Mix in the salt, turmeric, garam masala and curry powder. Cook for a few minutes longer and turn off the heat.

Add approximately half of the masala and all the drained lamb to a pan. Cook for few minutes while stirring on stove top. Add more masala if needed. You can reserve the remaining masala for vegetables and other dishes you wish to cook later in the week.

Heat up 2 or more tablespoons of oil on medium heat and fry the onions until they turn a deep brown color and become crunchy. Scoop with a slotted spatula onto a plate lined with paper towels. This step should be done on the day you’re eating. As an alternative, you could use crunchy onions (like French’s) from the supermarket.

In same oil you fried the onions, plump the raisins. It takes a minute or less. If you ended up buying French’s onions, then use only 1–2 tablespoons of canola oil to plump the raisins on medium heat. Use 1⁄2 cup raisins if using only as a garnish; add more, according to taste, if you wish to use raisins throughout the dish.

Toss the cashews into a pan with oil heated on a medium flame until they turn golden. This process is very quick. If you wish to layer the biryani with cashews, use 1 cup. If using only as a garnish, use only 1⁄4 of a cup. This step can be done in advance; cashews can be kept in an airtight container on the counter. Or you can buy roasted cashews.

Rinse and pat dry cilantro leaves with a paper towel. Flatten the leaves. Bring oil to medium heat and fry the leaves. This takes seconds. The crunch of these cilantro chips adds an amazing dimension to the dish. Preferably, this step is done the same day as serving.

Layering and assembling the Lamb Biryani:

Layer the bottom of a deep, ovenproof deep dish with rice. Dot the rice with masala-coated lamb cubes. If you choose to use cashews and raisins as part of the layers, sprinkle some on top of the lamb. Top the lamb with a layer of rice and repeat the steps. The top layer should be rice, garnished with the crispy onions, raisins, cashews and cilantro chips. The garnishes should be added just before serving. The dish can be made ahead, kept refrigerated and reheated, covered with foil in a preheated 350-degree oven, for 20 to 30 minutes or until it is hot. It is sublime the day its prepared or a day or two later.