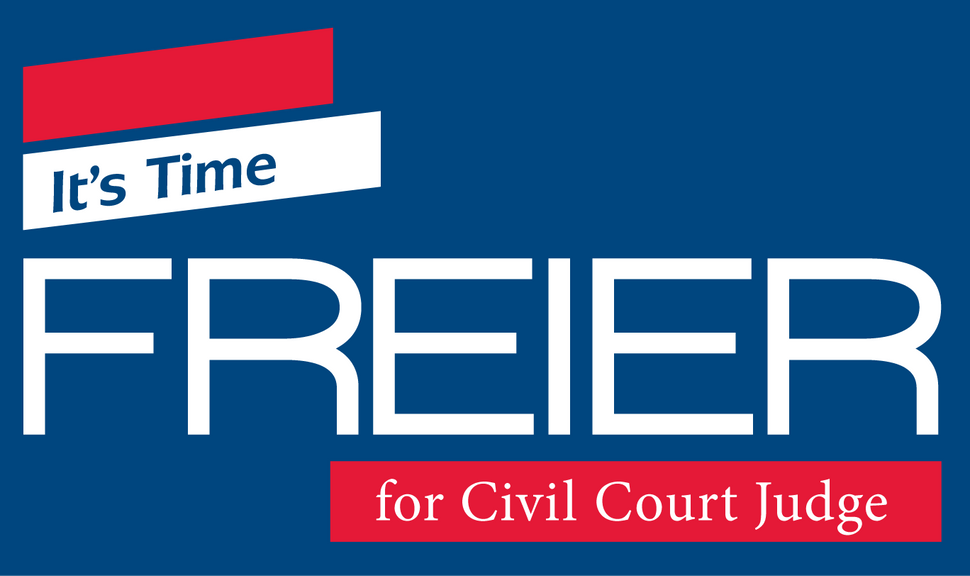 In the final countdown before the election, Ruchie Freier was still uncertain whether she would win the race for Civil Court Judge. But win she did, and starting in January 2017, she’ll become the first Hasidic woman ever elected to this high position.

Sipping hot tea with Ruchie in a kosher Dunkin’ Donuts, I asked her to share the secret of her success. Smiling pensively, she replied: “If Hashem wants it to happen, it’s going to happen.”

“With six children, becoming a judge has been a very slow process,” Ruchie remarked. A graduate of the Bais Yakov school, Ruchie began working as a legal secretary in Borough Parl when she was 20. After watching The Firm, in which Tom Cruise depicts a young lawyer exposing corruption among his colleagues, Ruchie felt inspired to try her luck in Manhattan. She was quickly disappointed. “I was bored stiff,” Ruchie laughed. She realized that in order to get any real, challenging law work, she would have to go to law school. At the time, she didn’t even have a bachelor’s degree.

Her husband, meanwhile, had already begun his college studies. Several years later, while attending his graduation, Ruchie, then 30, suddenly thought: “Now, it’s my turn.” With her husband’s encouragement, she enrolled in Touro College, a learning institution that was originally founded for Orthodox Jews. Working part-time, attending classes, and still making it home in time to bake challah for Shabbos, she earned her bachelors degree in six years. Law school came next, but Ruchie was wary of being thrust into the secular environment of Brooklyn College. Ruchie reflected on her mindset at the time: “I knew that G-d would waste no time in testing me.”

Ruchie’s first test came soon enough, when Hasidic teens who had rebelled against the strict boundaries of their yeshiva education began appealing to her for help. Her solution was to launch an alternative yeshiva, B’Derech (On the Way), where at-risk students could study secular subjects to in order to earn their GED, as well as get some vocational training.

Despite Ruchie’s religious devotion, some members of her community were suspicious of her motivations in founding B’Derech, but she remained firm. “They’re crying out to me,” she would explain to her critics, “but if you want to take care of them yourself, go for it.” The criticism eventually died down.

Ruchie’s work had such a strong impact on the B’Derech students that they remained in touch with her after completing their studies. This year, several of them even composed a Yiddish campaign jingle for her, and drove through the Borough Park streets, belting it out through their loudspeakers.

The community did, in fact, support her by a wide margin. “When I found out that I won, I was so grateful I just wanted to stream a banner from the highest buildings with a message saying: Thank you, Borough Park!”

Despite general doubts that the highly traditional Hasidic community would support a woman in an official leadership position, Ruchie’s first big break was with one of the most stringent sects, the Satmar Hasidim. Even before graduating law school, she was offered a job in Monroe, assisting in zoning issues. She immediately pointed out to her Satmar colleagues that the local non-Jewish inhabitants were nervous about the ever-growing Hasidic population, for the simple reason that they didn’t understand them. She advised the Satmar leaders to draw on the power of the press. They responded with a shrug: “It’s not going to help – they’re just anti-Semites.”

Ruchie took the matter into her own hands and reached out to a local reporter who had written critical articles about the local Hasidic population. She offered him an opportunity he had never considered: “I’m a Hasidic woman myself,” she told him, “and I’m ready to give you a chance to get to know the local Hasidic community better.” The reporter agreed.

Ruchie immediately asked a local Satmar family if they could host a non-Jewish reporter for a meal, in order to give him a chance to better understand their community. They were apprehensive, so they asked their local rabbi whether they could do this. “Not only can you invite him, you must do so,” the rabbi ruled.

The meal went so well that the reporter asked Ruchie if he could write a feature story about her personally. After his glowing portrait of this unique Hasidic woman was published, Ruchie’s reputation spread beyond Borough Park.

Ruchie works closely with the Hasidic community, but occasionally has had to ruffle a few feathers. In 2011, a group of women approached her, saying that they wanted to volunteer as EMTs in Hatzolah, the Chassidic-run ambulance corps. The women complained that they were turned away, after Hasidic rabbis ruled it was against Jewish law for women to participate in hands-on EMT service. The desire of the female volunteers to do this had nothing to do with feminism, Ruchie explained, but rather with tsnius, or modesty, since a number of pregnant women had confided that they were embarrassed at the prospect of giving birth in the presence of male strangers. “These volunteers were no rabble-rousers, but rather frum, sincere women.”

In spite of her efforts to try to persuade Hatzolah to admit the women, the organization refused to alter its hiring practice. Ruchie was not deterred—instead, she became a paramedic herself. She underwent all the necessary training, and then launched her own all-female Chassidic ambulance corps, Ezras Nashim.

Despite her accomplishments and the praise it continues to garner, Ruchie downplays it all. Before the election, when a friend had said: “Ruchie, I know you’ll win the election, because you’re so strong,” Ruchie could only laugh. “Me strong?” She countered, “I’m five foot zero and weigh 95 pounds – and that’s on a fat day!” Pausing for a moment, she added: “But my emunah, my faith in Hashem – that’s what’s strong.”