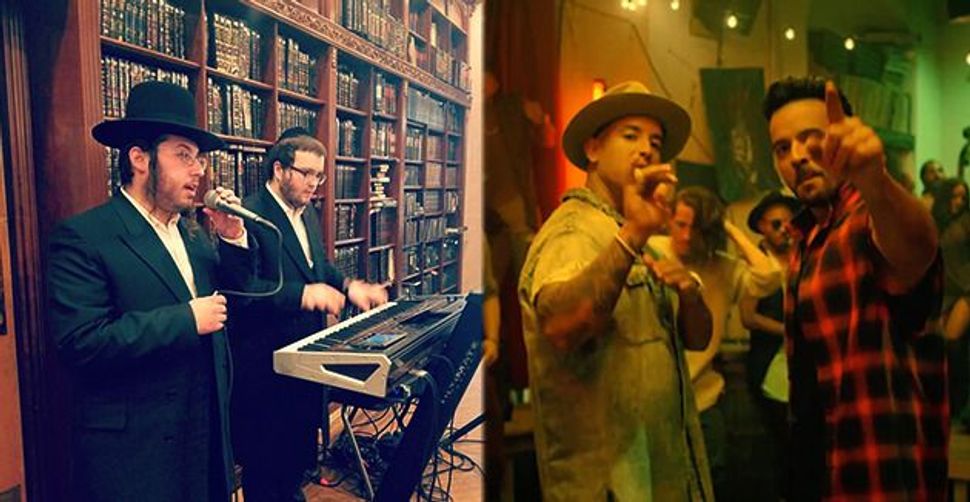 No matter where you travelled this summer, you were bound to hear Daddy Yankee and Luis Fonsi’s reggaeton hit “Despacito.” The Spanish-language chart-topper has become one of the most popular songs in history; its music video has been watched 3 billion times on YouTube, and the song was a Billboard #1 hit in 47 countries.

As the Yiddish saying goes: “Azoy vi es kristlt zikh, azoy yidlt zikh” (“whatever the Christians do, the Jews are sure to follow”). “Despacito” has already been translated into Hebrew, both in a literal translation that preserves the original’s racy lyrics and in a religious version, which sets Hebrew prayers to the catchy rhythm of the reggaeton hit.

Now Yiddish-speaking Hasidic Jews can enjoy their own version of “Despacito.” Performed by Kalmy Schwartz and produced by several giants of the contemporary Hasidic music industry, the new Yiddish version sings the praises of the yearly Rosh Hashanah pilgrimage to Uman, where tens of thousands of Jews gather to pray at the grave of Rabbi Nachman of Breslov (Bratslav).

Musically, the song’s new Yiddish incarnation is wonderful. The lyrics match the rhythm so well that someone who hasn’t heard Daddy Yankee and Luis Fonsi’s original could be excused for thinking the Puerto Rican singers stole it from Kalmy Schwartz.

Unlike Mordechai Ben David’s 1980s hit “Yidn”, which cribbed its tune from the German pop song “Genghis Kahn,” everyone knows the source of this Yiddish paean to Rabbi Nachman. YouTubers commenting on the video were divided as to whether the Yiddish version of “Despacito” is a chillul Hashem (a desecration of God’s name) or a kiddush Hashem (sanctification of God’s name).

Some commentators wrote that the song is inherently obscene due to its association with the Spanish original’s racy lyrics, adding that the timing of the song’s release just before Rosh Hashanah was inappropriate. Those in the kiddush Hashem camp argue that the song gives religious Jews an opportunity to think about Rabbi Nachman while listening to a popular tune they’d eventually hear anyway.

Whichever camp you may fall into, one thing is certain. Like its Spanish predecessor, the new Yiddish version of “Despacito” is sure to be a mega-hit, albeit only in the small but vibrant world of Hasidic pop.