From brawls over Zionism to rabbis playing favorites: life in 19th-century yeshivas 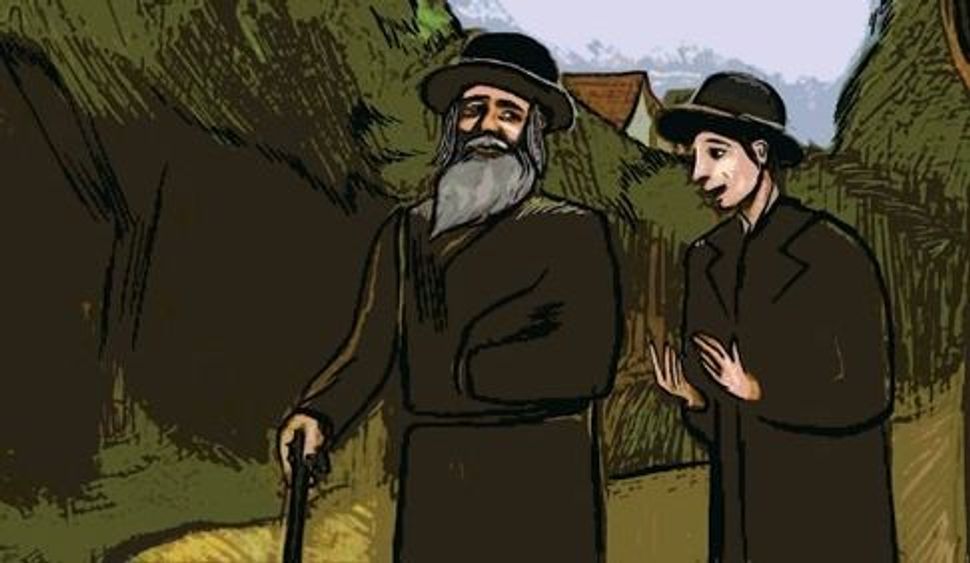 When reading about the lives of secular 19th- and 20th-century Yiddish and Hebrew writers, you will undoubtedly learn that many of them had studied in yeshivas before adopting a secular lifestyle. Chaim Grade, for example, was a student in the Navoraduk Yeshiva, which taught its students a strict version of mussar, a form of character development that emphasized discipline and shutting out outside influences. Hyam Nachman Bialik learned in the storied Volozhin Yeshiva.

Although both writers ended up leaving the yeshiva world, there’s no doubt that their religious education deeply influenced their weltanschaung, or world view. Yet until recently, there’s been very little research done on the daily life of the yeshive bokher during the 19th century. One book that proves a remarkable exception to that rule is Shaul Stampfer’s “The Lithuanian Yeshivas Of the Nineteenth Century,” previously published in Hebrew but now available in English. In it, Stampfer details life in the Volozhin, Mir, Slobodka and Telz yeshivas, based on the memoirs and letters of students and rabbis as well as official government documents of that era.

Before reading the book, I had assumed that the rational, intellectual Lithuanian yeshivas were founded as a reaction to the Hasidic movement, which had become increasingly popular among Jewish youth. Stampfer offers convincing evidence that this was not the case. In fact, the Lithuanian rosh yeshivas were in good relations with the Hasidic rebbes. The true goal of these new yeshivas, he argues, was to combat the threat of assimilation.

Stampfer devotes much of the book to the Volozhin Yeshiva, not only because it was the first large yeshiva — it was founded in 1803 — but also because it existed far longer than all the others. Volozhin operated for about 90 years, compared to Slobodka and Telz, which existed only for 30 years. As the first modern yeshiva, Volozhin served as a model for the others. Luckily, the former students of Volozhin wrote a good deal about their years in the yeshiva; Telz students wrote much less and those from Slobodka wrote almost nothing at all.

Reading some of the quotes that Stampfer provides by former students of Volozhin, we discover, for example, that the founder and first rosh yeshiva, Reb Chaim, as well as his son, Reb Yitskhok, who took over the position after his father’s death in 1821, worried about the health of their students and used to go on long walks with them outside — both to ensure that the boys got some fresh air and to understand them better. The only difference between the two rabbis was that Reb Chaim let them learn in the study hall till late into the night whereas Reb Yitskhok would urge them to go to sleep to improve the quality of their health.

In the 1860s and 70s Purim was a big deal at Volozhin, because that was the day that one of the students would be crowned the Purim Rov, or Purim rabbi. This had been a popular custom in the Middle Ages but had already gone out of style by the 19th century. Reb Chaim revived the tradition for his students, apparently for pedagogical reasons. As one former student wrote in the Polish Hebrew newspaper Ha-Tsfira in March, 1916:

“He wanted to know of the defects in his management of the yeshiva which he had not discerned and of which no student would dare to tell him, and therefore he singled out one day of the year, the day of Purim, when the sages of old also gave permission to make merry, so that one of the students would be free to do what he liked the whole day and would be in sole charge of the yeshiva and its management, and then all the undesirable deeds of the ‘all-year-round rabbi’ would come to light, and he would know and correct what was wrong afterwards, and would not repeat his mistakes thereafter.”

In most cases, relations between the rabbis and the students were warm. For many of the boys this was the first time they were living far from home, so the rosh yeshiva naturally served as a kind of father figure. But beginning with the second half of the 19th century, under the influence of the social upheaval taking place in the outside world, the mood in the yeshiva began to change, especially at Slobodka.

A good deal of the unrest at Slobodka was connected to its teaching of mussar, a disciplined effort to further ethical and spiritual development, which was the main goal of its founder and rosh yeshiva, Rabbi Nosson-Tzvi Finkel. Although the principles of mussar sounded good on paper, most of Slobodka’s students felt it was unnecessary, since they believed that studying Talmud for its own sake was itself virtuous. In other words, taking on the strict precepts of mussar was no less than bitul-torah, a waste of time that could be better spent learning Torah.

A second reason the students rebelled against the mussar curriculum was the rabbis’ practice of following their students around, to make sure they weren’t engaging in what they considered to be sinful behavior. If the rosh yeshiva or the mashgiach (spiritual supervisor) suspected a young man of reading secular books, for example, he would surreptitiously arrange for a second student to room with him in order to “keep an eye out” and report the student’s undesirable behavior to the rabbis. This practice raised the ire of Slobodka’s students, generating an anti-mussar campaign among them. The students would demonstratively carry the mussar books out of the study hall, or sabotage their rabbi’s lecture by studying Talmud aloud with their fellow students during his lecture – an act which frequently led the pro-mussar students to beat them up. In the end both parties filed a complaint with the chief rabbi of Kovne (Kaunas), a major center of Jewish study in Lithuania.

At around that time, 150 students at Slobodka also sent a letter to the editor of the modern Hebrew newspaper Hamelits, claiming that most of the funds donated to the Slobodka yeshiva for stipends to help its students with basic living expenses — all large yeshivas received financial contributions from wealthy Jewish donors as well as numerous small donations by poorer Jews — were distributed only to the 40-50 best mussar students and eight to ten dedicated students of Talmud. All the other boys, they wrote, were given “moldy bread and empty words from the rosh yeshiva”.

After a new spiritual counselor tried to institute a strict mussar curriculum at Telz, the students became so angry — especially given that he was fervently opposed to Zionism, whereas the students were Zionists themselves — that one evening during the winter of 1897, they simply stopped studying and began arguing loudly in the study hall as to whether learning mussar detracted from the more elevated activity of learning Torah. They quarreled so loudly that when the spiritual counselor entered and began scolding them for wasting time when they should be engaged in spiritual activity, no one paid any attention to him.

In the end, although the yeshivas were instituted to fight the tide of assimilation, their goal proved futile when many young men – including close relatives of the yeshivas’ leadership – began moving from the shtetl to the big city in search of work, thereby absorbing the values of modern society.

As a result, many old traditions started disappearing. One, which directly affected the yeshiva students, was the changing preferences among wealthy Jews when seeking a match for their daughters. For centuries, well-to-do fathers would choose the most promising Torah students. Now, though, they were more eager to take talented university students as a son-in-law. Unsurprisingly, the motivation for yeshiva students to become learned in Talmud dropped drastically. Those who did choose to continue studying at the yeshiva no longer did so merely for its own sake, or to find a wife, but for more practical reasons: To get an official position as a community rabbi.

Stampfer’s book has only one minor shortcoming. The transliteration of the Hebrew-derived words are written according to the modern Israeli pronunciation instead of the traditional Ashkenazi. For example, Stampfer uses bet-midrash instead of beys-medresh, a linguistic anachronism, which weakens the authenticity of the text. As Stampfer himself explained to me, the decision to use the Israeli pronunciation wasn’t taken lightly, as both possibilities had pros and cons. There is no doubt that the modern Israeli transliteration is more familiar to readers. On the other hand, providing a glossary for terms written in Ashkenazi Hebrew could have solved this problem.

Despite this small inconsistency, the book is very well-researched and simply fascinating, in that it shows us what life was really like in the large Lithuanian yeshivas of that period: The relations between the yeshiva boys and their rebbes, between the boys themselves, the joys and the frustrations — a perspective which no encyclopedia could ever capture.

From brawls over Zionism to rabbis playing favorites: life in 19th-century yeshivas