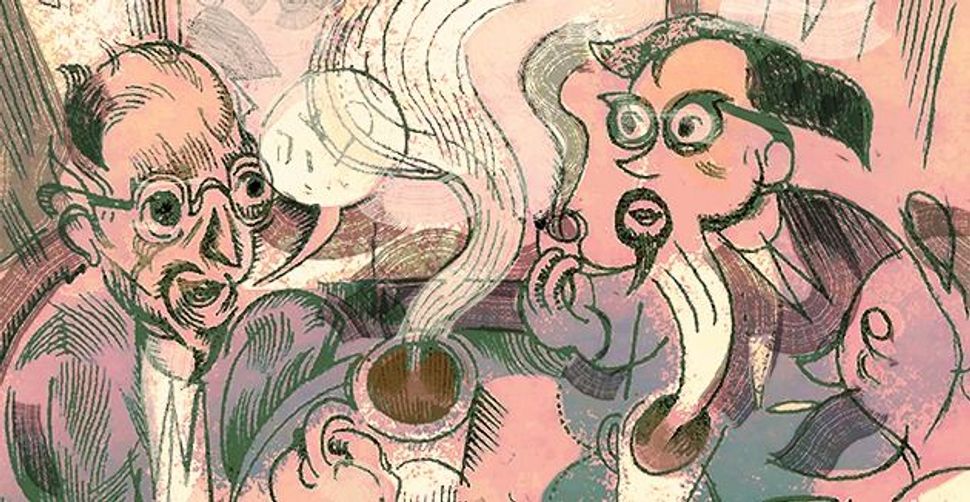 Jewish literature is full of references to cafés, like the Café Fanconi in Odessa described by Sholem Aleichem’s hapless hero, Menachem Mendl, or the Café Royale on the Lower East Side, frequented by Jewish socialists, writers and artists.

These literary descriptions of café settings are often read merely as curious episodes but in fact, the café was an important cultural institution, especially before World War II. Professor Shachar Pinsker’s hefty new book, “A Rich Brew,” has an ambitious subtitle: “How Cafés Created Modern Jewish Culture.” The reader learns that the cafés in Europe, America and Israel were indeed highly productive spaces where people wrote, read and frequently debated questions of modern Jewish culture.

The love story between Jews and cafés had its start in 18th-century Berlin. The Gelehrtes Kaffeehaus was a new meeting place where educated individuals could meet, read newspapers, play chess and chat. Moses Mendelssohn, considered the father of Berlin’s Haskalah, or Jewish Enlightenment, was among the café’s frequenters. The coffee was kosher and, the café, compared to other local institutions, evidenced no Christian influences. It was in the café that Mendelssohn was inspired to write the essays and books which were to became the platform for his philosophy of Jewish acculturation.

The blossoming of Jewish cafés continued from the mid-19th century until the Holocaust. Pinsker takes the reader on a journey across the important centers of modern Jewish culture: Odessa, Warsaw, Vienna, Berlin, New York and Tel Aviv, using a host of different sources and making for a captivating read. This book will be useful for professional researchers of Yiddish and Hebrew culture and literature and for the broader audience as well.

The Association of Jewish Writers and Journalists in Warsaw at Tlomackie 13 was the most famous Yiddish literary club between the two world wars, portrayed in many memoirs and literary works. But that wasn’t the first Jewish café in Warsaw. Cafés gained popularity at the beginning of the 20th century when Warsaw became a magnet for young, impoverished intellectuals, especially Lithuanian Jews. Some of them dreamed about a literary career in Yiddish or Hebrew. They felt comfortable in the home of Yekhezkl Kotik, the respected author of memoirs about Jewish life in Russia in the 19th century. They would sit there for hours and read newspapers, discuss literature and politics, even conduct business. Cafés were also warm in the winter, a valuable benefit for more destitute visitors.

Yiddish literature would surely have been less dynamic without these Warsaw cafés, and especially without the writer’s club on Tlomackie 13. In a way, Pinsker’s book reads like a history of Jewish literature, as seen from the perspective of the café table. The Warsaw cafés were important not only for those Jews who wrote in Yiddish, but also for those who penned their work in Polish, like Julian Tuwim or Antoni Slonimski.

The epilogue of the Warsaw Jewish café culture played out in the ghetto: “The ghetto café… was a complex site of collaboration, cultural survival, commercialism and elitism,” Pinsker concludes in his chapter about Warsaw.

Certain cafés in Vienna and Berlin actually served as sanctuaries for Jewish immigrants and refugees who arrived after World War I. These large German-speaking cities already had a rich culture of literary and artistic cafés. For many Jewish writers, the cafés became “stations on the transnational silk road” of emigration, which eventually led them to America or Israel. The writers brought elements of this café culture abroad to New York and Tel Aviv. New York cafés appear in a number of works of American Yiddish literature, as in Sholem’s Café, described in Dovid Ignatov’s novel, “In Keslgrub” (“In the Whirlpool”). Ignatov describes these locales as a “place of confrontation between various ideas of Yiddish literature.” Quite a few heated quarrels took place here, often about radical political views.

Pinsker closes: “The urban cafés served not only as centers of migrant cultural networks, but also as a respite for the homeless and for cosmopolitan multilingualism, which was in danger of being destroyed by nationalist ideologies.” Today, though, Pinsker surmises, cafés have come to play a less important role, as Facebook and other virtual spaces seem to have taken their place.