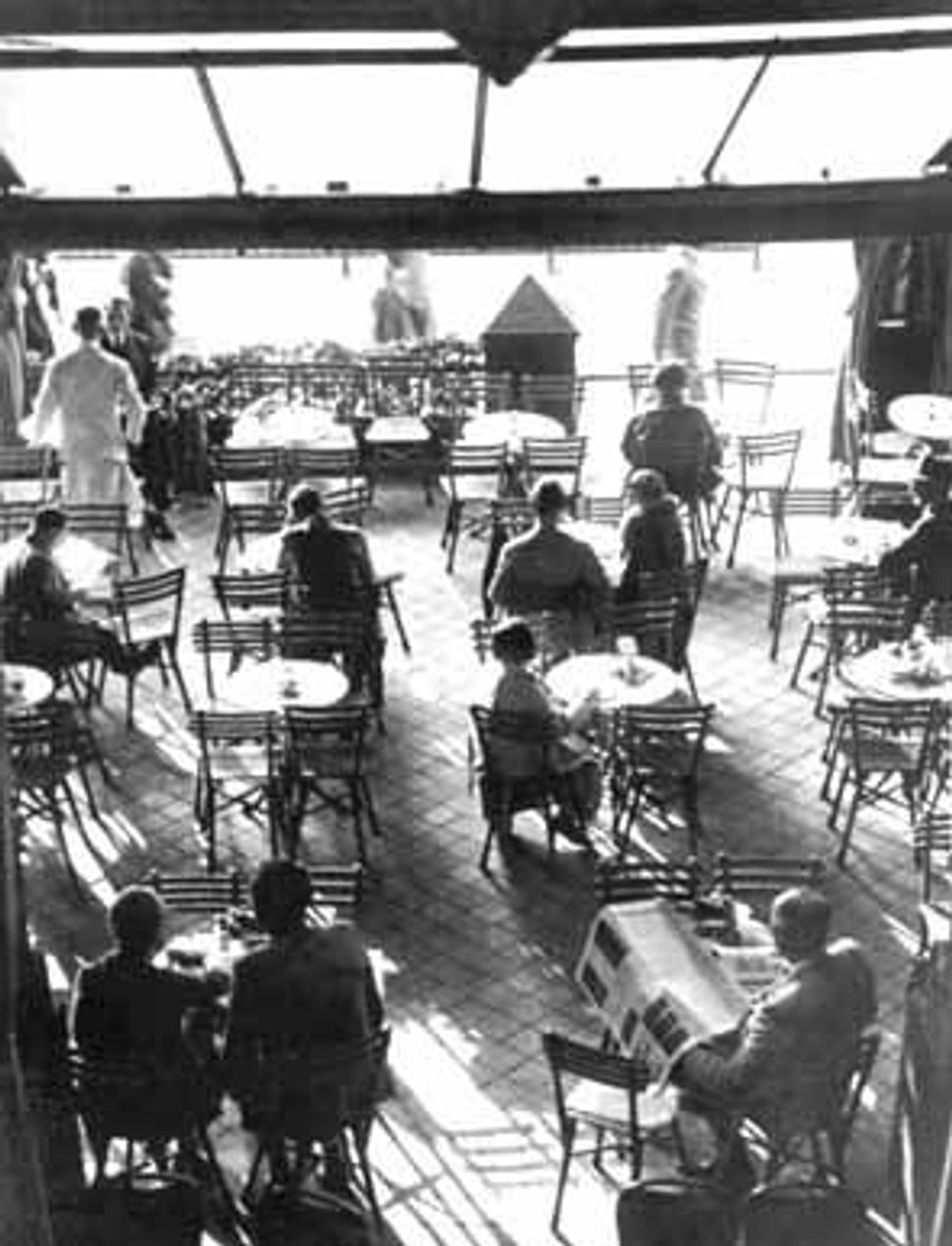 The terrace at the Romanisches Café, circa 1925. Image by www.zlb.de

“Yiddish in Weimar Berlin” describes street scenes in the ironically named “Jewish Switzerland,” a slum northeast of Alexanderplatz, which housed arrivals from Poland. Though poverty-stricken, the area boasted theatrical performances by the touring Vilna Troupe, while Yiddish writers clustered at the Romanisches Café, nicknamed the Rakhmonisches (Pity) Café by its regulars to evoke its “poor food and run-down interior.”

Catty jokes as well as sardonic puns were rampant among the writers at the café; Isaac Bashevis Singer once reportedly claimed that if Sholem Asch ever “wrote in a grammatically correct Yiddish, his artistic breath would evaporate.” Hersh Dovid Nomberg, a tubercular Yiddish author and disciple of I. L. Peretz, said that the Romanisches Café was an ideal sanatorium, since the air was so “filled with tobacco smoke that not a single [tuberculosis] bacillus can survive here.”

In addition to smart remarks, “Yiddish in Weimar Berlin” also examines overlooked poems by Berlin’s Yiddish writers, such as Moyshe Kulbak’s “Raysn” (“Byelorussia”), a piece of versified bubbe worship that features a grandmother of “supernatural fertility…comparable to a chicken laying eggs.”

Another chapter of “Yiddish in Weimar Berlin” explores how in 1921, Abraham Cahan decided that Berlin was “in a sense, the most significant city in the world” for Jews, and recruited staff for a large Forverts bureau there. Jacob Lestschinsky, a Ukrainian-born scholar of Jewish sociology and demography was hired as the bureau chief.

Though Lestschinsky would be repeatedly arrested for his courageous reporting on Berlin’s anti-Semitic pogroms, his accurate reports were discounted by fellow Jews like Alfred Döblin and Asch, who diagnosed Lestschinsky’s articles as an East European journalist’s overreactions, adding: “Germany is not Ukraine!”

By 1933, the Berlin Forverts bureau was dissolved by exile or deportation. Yet throughout the war, the Forverts had a subscriber in Berlin, Johannes Pohl, a Judaica specialist at the Prussian State Library whose knowledge helped the Nazis loot Jewish libraries throughout German-occupied Europe.

Listen to the “Yiddish Foxtrot,” recorded in Berlin circa 1930: