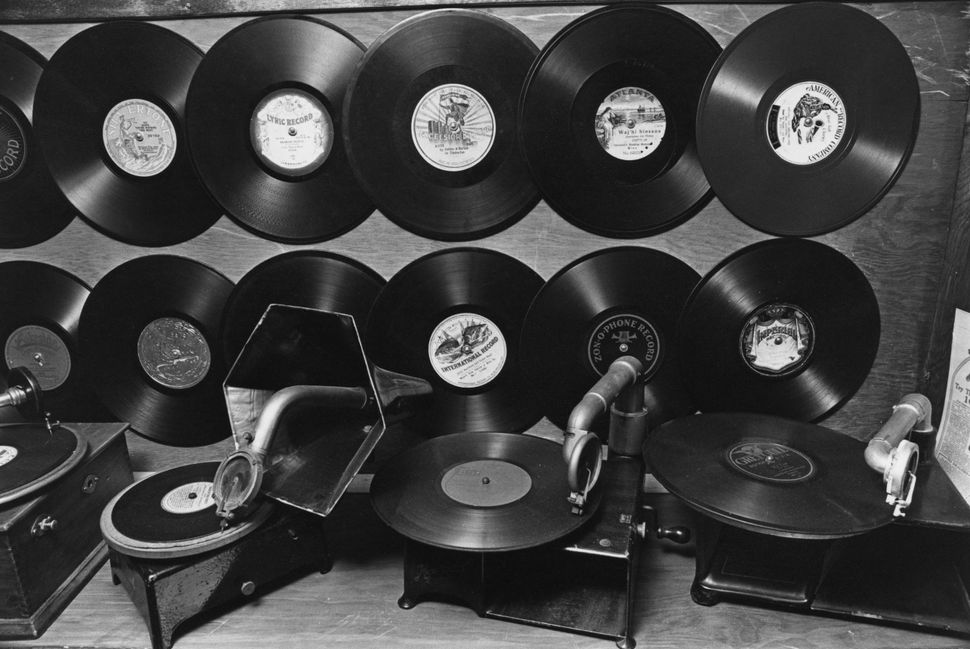 Records and phonographs at the Old Sound Museum in Massachusetts on October 31 1978. Image by Barbara Alper/Getty Images

A Yiddish-language album “Yiddish Glory: The Lost Songs of WWII” was nominated for a Grammy for Best World Music Album. The unusual honor is only the second time that an album of Yiddish songs has been nominated for music’s most esteemed prize. The first was the soundtrack to the film Partisans of Vilna in 1990.

“Yiddish Glory” was created by Dr. Anna Shternshis of Toronto University and singer and ethnomusicologist Psoy Korolenko, together with a band of Canadian, Russian and Belarusian musicians. The album revives forgotten military songs sung by Jewish soldiers in the Soviet army during World War II, as well as songs composed in ghettos and concentration camps in the Nazi-occupied USSR.

The songs featured on “Yiddish Glory” make up only a tiny portion of a massive archive of thousands of wartime Yiddish-language songs that were collected by Moshe Beregovski, the leading folklorist of Eastern-European Jewish music, after Germany’s defeat. Like many prominent Jewish scholars in the USSR, Beregovski was arrested on Stalin’s orders in 1949. His massive archive was confiscated and assumed lost until Shternshis came upon it while researching other topics in Kiev in the late 1990s.

Shternshis returned six years later to conduct research on Beregovski’s archive. On doing so, she discovered songs with unexpected lyrics. Among them were Yiddish songs praising the bravery of Chuvash women; battle songs to calm the nerves of soldiers on the front; and one particularly aggressive number instructs Hitler to “kiss our asses.” (Yes, that one is on the album.)

“Yiddish Glory” became an unexpected hit upon its release, earning prominent coverage in well-known publications and becoming the subject of an NPR radio documentary.

Will “Yiddish Glory” become the first Yiddish-language album to win a Grammy? Find out when the Grammys air on February 10.