In Israel, Yiddish Is Surprisingly Trendy 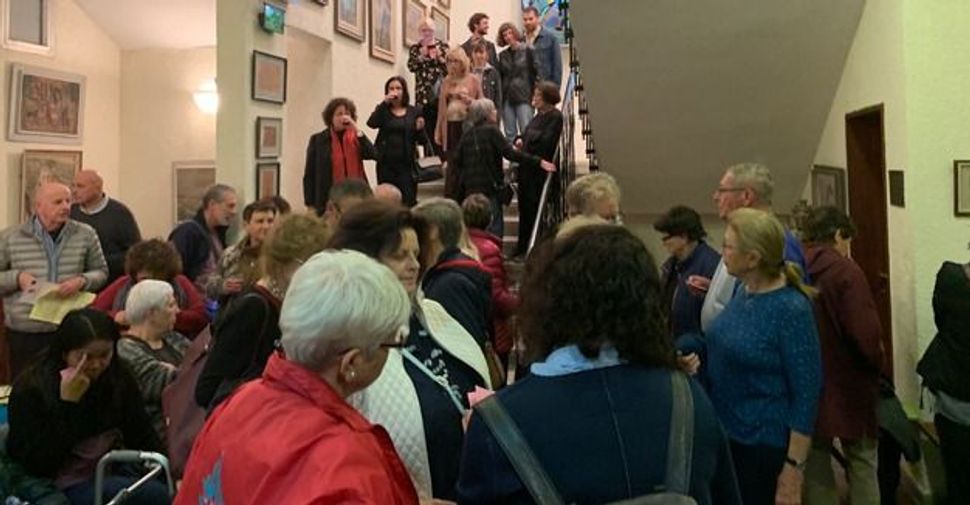 The crowd arriving at Beit Shalom Aleichem to see the Yiddish Cabaret. Image by Yaad Biran

Last month, I embarked on a dream of mine: a 10-day Hebrew immersion in Israel with the aim to finally become fluent in the language.

For years, I’ve been studying Hebrew, both through classes and on my own. Every Shabbat afternoon I get together with my friends to read modern Hebrew literature in the original. We’ve already finished a number of novels and collections of short stories by Meir Shalev, Etgar Keret, Sayed Kashua and Eshkol Navo.

And yet, I still find it hard to chat with Israelis or even to follow the dialogue in TV programs like Shtisel and Shababnikim. So I decided to use my vacation time to dive into a Hebrew-speaking environment. I signed up for the Ulpan Or in Jerusalem, where students learn with an instructor one-on-one between 3 and 5 hours a day.

Well, as we say in Yiddish: Der mentsh trakht un got lakht, man makes plans but God laughs, knowing what’s really in store for him. As soon as my Yiddishist friends in Israel heard I was coming, they began organizing lectures for me in or about Yiddish. So my visit ended up being somewhat jarring for me: half of the time was devoted to conjugating the Hebrew verb stems “Nifal” (passive voice) and “hiphil” (causative action) and chatting in Hebrew with waiters, store clerks and friends; while the other half of the time I spoke in and about Yiddish and the Forverts.

My first talk was on Shabbat after services at the Modern Orthodox synagogue, Kehillat Yedidya, in the German Colony section of Jerusalem. Eudice Winer, daughter of the late Dr. Gershon Winer who was dean of the Jewish Teachers Seminary when I studied there in the 1970s, organized the event. She asked me to speak about the history of the Forverts and how we’ve changed in the digital era. We decided to keep the talk in English since only a small percent of its congregants know Yiddish.

When I heard that the lecture would take place after the kiddush, I grew pessimistic. At most synagogues in the US, guest speakers give their talks before the kiddush to ensure an audience. The understanding is: “You want the chulent? You’ll have to hear the talk first.” Oh well, I thought, I guess we’ll have about 10-12 people.

I was wrong. About seventy people showed up, and afterwards a number of them came over to share their connection to the Forverts and to Yiddish.

The next day, I gave a talk at the Jerusalem JCC, Beit Yehudit – this time, in Yiddish. The topic was The History of Gefilte Fish and Other Ashkenazi Dishes. This event was organized by Beverly Bracha Weingrad, translator of the Yiddish Family Cookbook, and Dr. Lea Skiba, an instructor in the prestigious Yiddish summer program at Tel Aviv University. Although the lecture was in Yiddish, about 80 people showed up, evidence that there is not only more interest in Yiddish among Israelis, but that many of them actually understand the language.

This surprising new interest in Yiddish was also evident in Tel Aviv. Dr. Miriam Trinh, director of the new organization, Yiddish Ort, arranged for me to speak about the Forverts, in Yiddish, to a group of students, writers and cultural workers. Several days later I caught a performance of the new monthly Yiddish event, Esther’s Cabaret. The monthly cabaret, which takes place in the majestic Yiddish cultural building, Beit Sholem Aleichem, is directed by Yiddish theater maven Dr. Esti Nissim and the skits and parodies are written by Yaad Biran. When I arrived, the large hall was packed, including both familiar faces of the Israeli Yiddish scene and everyday Israelis eager to hear some mame-loshn; all in all, about 200 people. 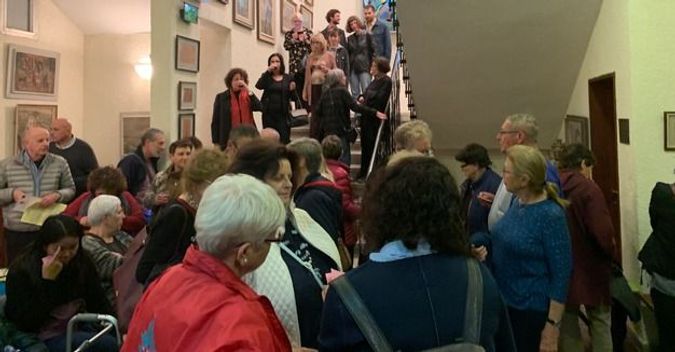 The crowd arriving at Beit Shalom Aleichem to see the Yiddish Cabaret. Image by Yaad Biran

I’ve been to Israel about eight times but I must say this trip was the most Yiddish-y of all. Even before my visit, I’d noticed a growing interest in the Yiddish language and culture among Israelis, especially through Facebook where Israeli readers and viewers are more apt to leave comments in Yiddish, using the Hebrew alphabet, as are Americans who comment in English or transliterated Yiddish. The reason, I think, is that many Americans, even those who know Yiddish, are simply not used to using the Hebrew alphabet, while Israelis read and write it day and night, all year round, enabling them to more easily transition from writing Hebrew to Yiddish.

I also noticed something else. Until recently, Yiddish in Israel drew interest mostly from academics, klezmer musicians, singers, actors, gays and activists for progressive causes, for whom supporting Yiddish means strengthening a minority culture within Judaism that’s been denigrated and mocked, and giving respect to Yiddish writers and poets whom Israeli society has ignored for so long.

But this time I also noticed warm sentiments to Yiddish from so-called mainstream and right-leaning Jews, including supporters of Prime Minister Netanyahu and President Trump. Their motivation seems different, however. Although a number of them have recently gotten interested in Yiddish because it reminds them of their late Yiddish-speaking parents and grandparents, I also sensed that their eagerness to connect to Yiddish is part of a subconscious desire to make Israel “more Jewish”.

For years, Israel has striven to be just like other nations, in order to be accepted by the international community. These days, though, as more Israeli politicians are calling Israel first and foremost a Jewish nation, many Israelis are eager to strengthen their own Jewish identity, as evidenced by the huge popularity of President Rivlin’s Bible study initiative even among secular Israelis.

It could also explain why “Shtisel”, an Israeli TV show with many scenes in Yiddish, has become such a hit among Israelis across the religious divide. Even when the dialogue is in Hebrew, Yiddish words keep popping up as, for example, the use of the word “shtele” instead of “avoda” to mean “job”. In one scene at an intimate concert of klezmer music, the lead singer performs a Yiddish song that I’ve never heard – very surprising, since the only Yiddish songs you ever hear these days are cliched ones like “Oyfn Pripetshik” and “Tumbalalaika”.

In other words, Israelis today seem to be much more amenable to exploring the Yiddish language and culture as a part of its own cultural legacy.

I believe we’re seeing just the tip of the iceberg. Next year, I hope to return to Israel but this time I think I’ll stay elsewhere. As a number of Israeli Yiddishists commented during my visit: “If you think they love Yiddish in Jerusalem, wait till you come to Tel Aviv.”

In Israel, Yiddish Is Surprisingly Trendy