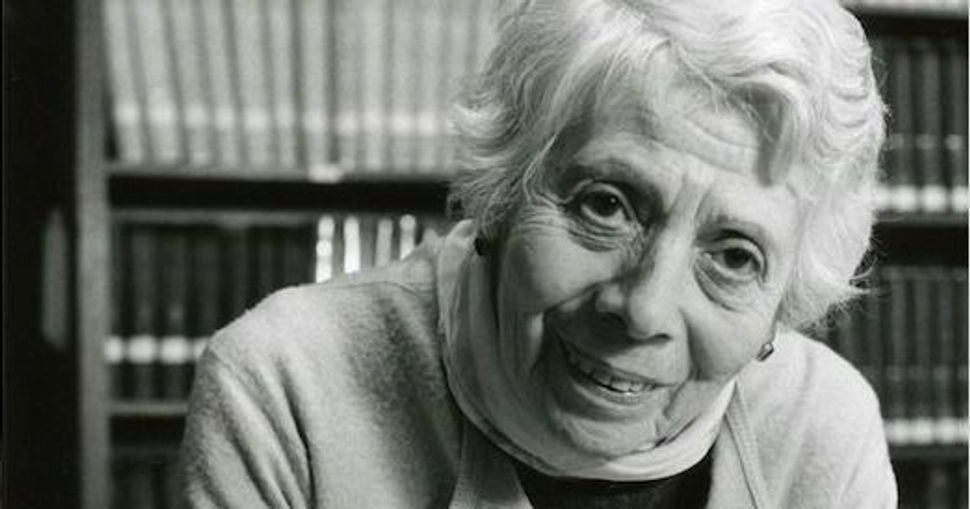 Whenever I see an announcement for the latest exhibit at the Neue Galerie, a New York museum of German and Austrian Art, I’m reminded of the nearly four decades (1955-1994) when the YIVO Institute for Jewish Research had its home in that same Upper East Side townhouse. During those years, the mansion was a lasting outpost of the intellectual atmosphere of Vilna, the “Jerusalem of Lithuania,” where YIVO had its headquarters from 1925 until 1940.

More than practically anyone at YIVO, that spirit was preserved by Dina Abramowicz, its longtime librarian.

I first crossed paths with Dina, in December 1971, at a conference of the American Historical Association. Among the panelists at one session was Dr. Isaiah Trunk, a member of YIVO’s research staff. Seated in the front row was a small, dignified-looking woman with graying hair. There were whispers that this might be the political philosopher Hannah Arendt.

But no, it was Dina Abramowicz, who was present to listen to the scholarly papers and support her YIVO colleague.

Four years later, I officially met Dina when I enrolled as a library intern at YIVO. Our initial conversation was in Yiddish, though later on we usually spoke English with each other. (Dina had a utilitarian approach to languages.) Irving Howe had just published his monumental book about Jewish immigrant life, “World of Our Fathers,” and in it he paid tribute to YIVO’s “indefatigable and splendid librarian, Dina Abramowicz.” The list of books offering comparable expressions of gratitude to Dina, it turned out, was long indeed — and would get longer. Howe lived near YIVO and dropped in periodically to pay his respects. He sometimes referred other researchers to Dina. Once, I recall, it was the actor and director Rob Reiner, who was working on a pilot for a new TV series.

Dina’s Vilna had been a culturally rich and linguistically diverse city. Early on, I noticed that she invariably did the addition or subtraction for simple calculations, sotto voce, in Russian, her family’s home language. Her father was the Yiddish educator, journalist and Bundist Hirsz Abramowicz, and her mother, Anna Schreiber, also a teacher, was raised in a family of maskilim, or participants in the Jewish enlightenment, known as the Haskalah. During and after World War I, Dina attended Yiddish elementary and secondary schools, as well as a Polish gymnasium and Vilna’s Stefan Batory University, where she received bachelor’s and master’s degrees in the humanities. She switched effortlessly between Russian, Yiddish and Polish. Her Russian-accented English was always distinctly her own.

Dina did not ordinarily dwell upon her personal sufferings during the Holocaust. In the final decade before her death in 2000, though, she wrote and spoke about the Vilna ghetto library. She had been a children’s librarian before the war, and while in the ghetto, she served as assistant to Herman Kruk, who created the ghetto library. After escaping the Vilna ghetto shortly before its liquidation in 1943, she joined a unit of partisans. But while Dina would speak some abou these events, she generally preferred not to focus on herself. Instead, she devoted considerable effort to ensuring that a book by her father, Hirsz Abramowicz, called “Farshvundene Geshtaltn,” or “Profiles of a Lost World”, would appear in English translation. In 1999, just a year before Dina died at the age of 90, the book — first published in Buenos Aires in 1958 as part of the famous series “Dos poylishe yidntum” — was published in English by Wayne State University Press.

Hirsz Abramowicz had by chance been visiting the U.S. when war broke out in 1939. Seven years later, Dina joined him in New York City, where she resumed her career as a librarian – this time at YIVO, where she worked until the very end of her life. She was physically robust and endowed with both a powerful memory and a strong intellect. She did not suffer fools gladly; at the same time, she derived considerable personal fulfillment from helping countless researchers achieve their objectives. Among these were novelists, poets, students, budding scholars, tenured professors, filmmakers, journalists, actors, fact-checkers, genealogists, curiosity-seekers, Hasidim and even some of our curious neighbors on 86th Street.

I was fortunate to work for and alongside Dina for over 17 years. I like to think that, through her, some of the spirit that she and her landslayt — or fellow Vilnian Jews — referred to as Nusakh Vilne rubbed off on me.