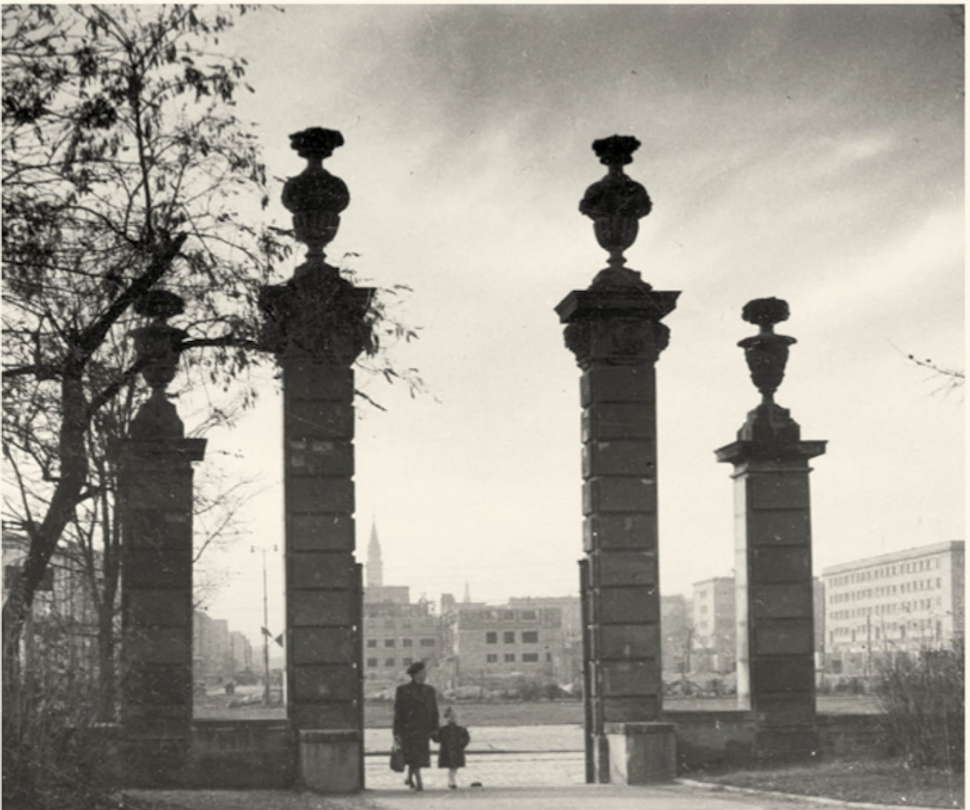 When I first heard that Warsaw’s Polin Museum had an exhibit about Muranow, the former Jewish quarter of the Polish capital, my first instinct was to buy a ticket to Warsaw – until I remembered that we’re in the midst of an epidemic.

Although I live in Israel, Muranow has become very familiar to me in recent years, during my ongoing research of daily Jewish life in Warsaw before the Holocaust. But my interest also extends to life in Muranow today. 70 years have passed since the Holocaust, so when I visit the area, I’m just as eager to learn about the Poles living there now as I am about its former Jewish residents.

Since I couldn’t tour the exhibit in person, I checked out the online exhibit and ordered the accompanying catalog, “Muranow Is Here.” The exhibit is full of creative touches. By pressing an old doorbell, for example, you can listen to an English translation of a short story by the late Yiddish writer Zusman Segalovitsh about Krasinski Park, the so-called Jewish garden in Muranow. A pair of “binoculars” allows the viewer to examine old photos in detail. And there are also more curious displays like a container of the German-produced skin cream “Nivea” which was apparently popular in Warsaw in the 1930s. As a result, the exhibit truly gives the viewer a sense of what Muranow was like. 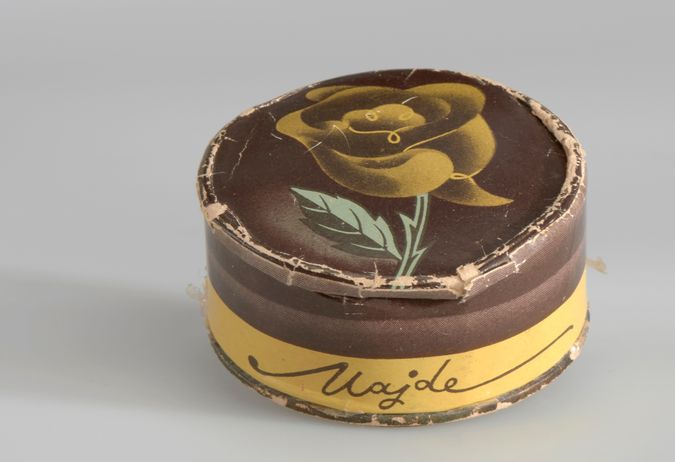 Skin cream made in Germany. Image by Polin Museum

An exhibit is like a film where you can almost “see” the voices. The accompanying catalogue can’t do that but it’s packed with information that helps the viewer gain a deeper understanding of what he’s seeing and hearing. Among the contributors to this volume is the journalist Beate Chomontowska, who created “Muranow Station,” an mp3 recording of a guided walk around Muranow, memorializing the Jews of Muranow who perished in the Holocaust, and Polish historian Jacek Leociak, who writes about the Jewish streets of Warsaw’s past.

The leitmotif of the book is the metaphor of the palimpsest: a parchment or a manuscript where the old letters have been erased, and over them new letters have been written. In the book, various layers of the neighborhood are uncovered, many of which would go unnoticed by contemporary visitors. The first layer alludes to the natural environment of Muranow before the eighteenth century: Two rivulets once flowed there, as well as several canals, pond, and swamps. This was why the Italian architect Belotti, who first began to develop the area, referred to it as “Muranow”, naming it after Murano, the famous island near Venice. After the area was covered with houses, only street names served as witnesses to its pastoral history: Gensza Street and Pavia Street, for example, were named after birds (gensza are geese and pavla are peafowl). 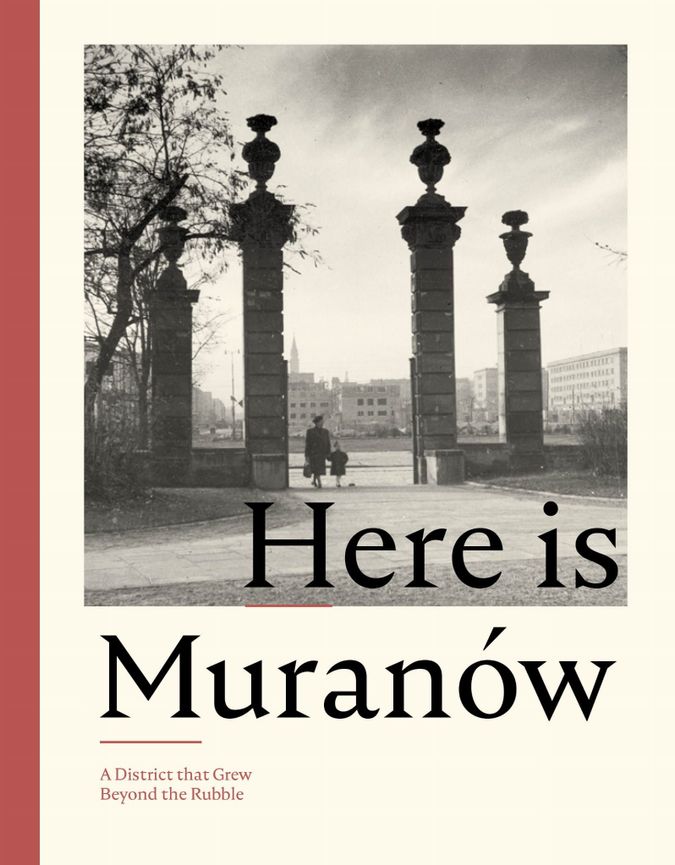 Jews started settling in Muranow as soon as it began to be built, and in the first years of the 19th century there were already Hasidic synagogues there, as well as a Jewish graveyard, ritual baths and primary schools. As urbanization spread throughout Europe, many Jews came to Muranow from Polish shtetls, especially Jews from Belarus and Lithuania (nicknamed Litvaks) who greatly changed the character of Warsaw.

By 1882, 90% of the neighborhood was Jewish. Agnieszka Działkowska writes about religious life and cultural activities before the war, such as the various Yiddish theaters, which seemed to occupy every other house. 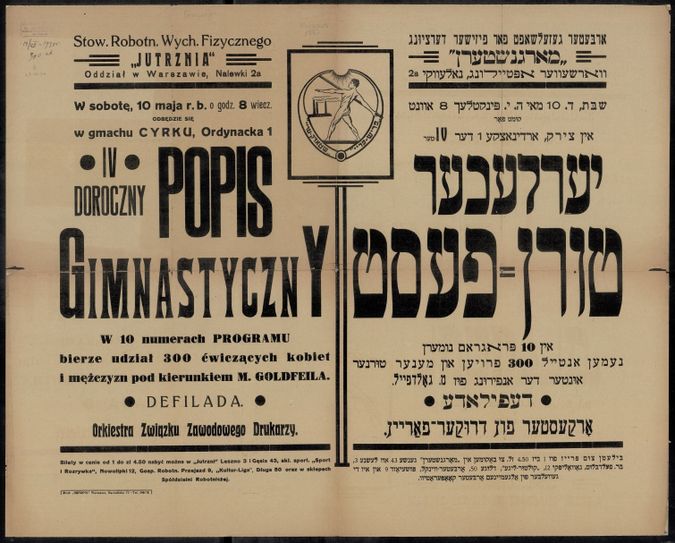 A poster in Yiddish and Polish for an athletic meet. Image by Polin Museum

There are several valuable artifacts in the exhibit from that period. For example, a pair of scissors, which lets us know exactly how an everyday object like this looked like then. It’s painful, though, to see such a recent chapter of Jewish history now in the preserve of archeologists.

In 1940 the Nazis established a ghetto in Muranow, and most of the houses were destroyed when the ghetto was liquidated. By the end of 1943 the Germans had razed the entire area. The residents of the neighborhood were reduced to ash. Although most of Warsaw was ruined in the war, no other district experienced such a transformation. The architect Bohdan Lachert was to rebuild Muranow from scratch, but there was no one left to long for the way it was, and so the new version came with an entirely new appearance. 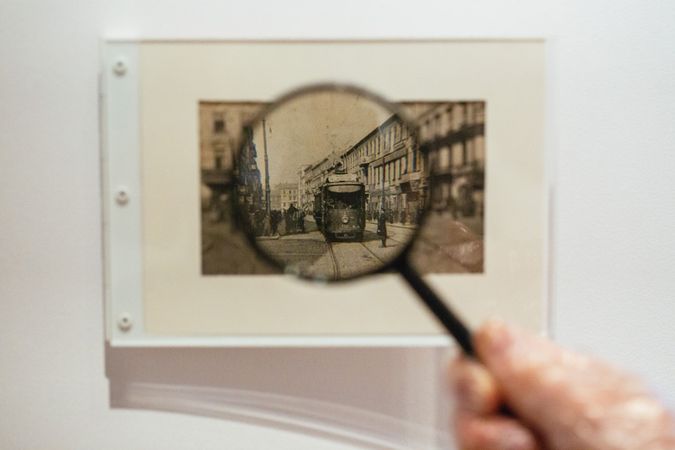 A picture from the online exhibit: an artistic look at the neighborhood that was. Image by Maciek Jazwiecki

Lachert’s radical plan was to build a “modern garden city,” but one that didn’t erase the memory of its bloody past. For that reason, he left behind mounds of ruins as a Holocaust memorial. Most of the new streets were paved, leaving only the streetcar lines and cobblestones of the old streets, now renamed “Bohaterów Getta” (heroes of the ghetto).

The book describes the “new” Muranow, which is now actually more than 70 years old. Poles from other neighborhoods in Warsaw have moved in and over time the neighborhood has developed a different character: the residents are generally interested in the past, and participate in initiatives to commemorate their former neighbors. Several murals are dedicated to well-known Jewish figures: the founder of Esperanto—Ludwig Zamenhof; the Warsaw Ghetto fighter, Marek Edelman; the historian Rachel Auerbach and the pedagogue Stefania Wilczinska. 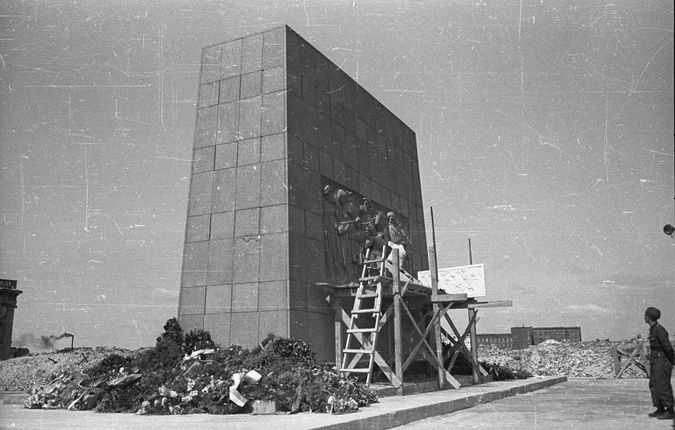 Nathan Rapoport’s memorial to the Jews killed in the Warsaw Ghetto Uprising, 1948 Image by PAP

Each year, on April 19, the day of the 1943 Warsaw Ghetto uprising, the residents of Muranow participate en masse in a march in honor of the ghetto heroes. The Muranow central square is filled with monuments, gardens, alleys, and — most significantly — the Polin Museum, one of the most popular museums in Warsaw, all of which has erased the former emptiness that had symbolized the disappearance of over 300,000 Jews.

One thing is missing from this book, however: Yiddish sources. The authors base their information almost entirely on books, articles, and newspapers in Polish. The accessibility of these sources makes matters probably easier for them, but they give only a partial portrait of Warsaw Jewry. The curator of the museum, Renata Piatkowska, complains, for example, that one knows almost nothing about the original owners of the display objects. Of course, most of them weren’t from the Polanized Jews (Yahudim, as they were called) who left their traces in Polish. This is a shame, because in Yiddish the sources about Yiddish Warsaw are practically limitless. On the other hand, when you search in Yiddish books you find the same problem in reverse: what’s missing there is information about the “Yahudim,” and the picture is correspondingly incomplete. If one wants to conduct research more deeply about Jewish Warsaw, one needs to read sources both in Yiddish and in Polish. The time has long since come for such a synthesis.