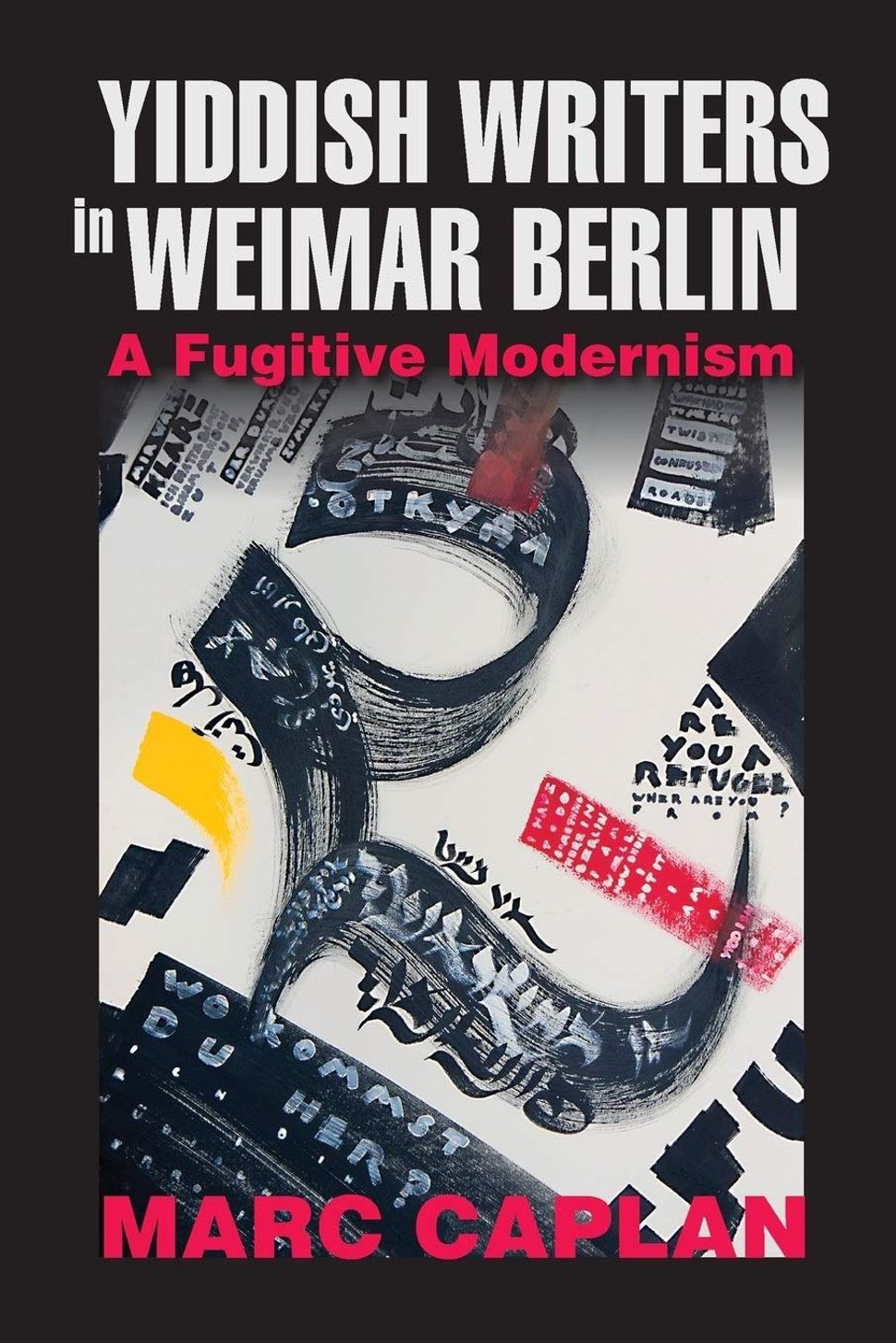 The brief but lively and productive Berlin period in the history of modern Yiddish culture is a special source of interest for contemporary researchers. Out of a melting pot of various languages, styles and genres, several literary and artistic masterpieces emerged that are simultaneously Jewish and European.

Yet, the contemporary nostalgia for the Weimar era between the end of World War I and Hitler’s rise to power in 1933 also leaves a melancholy aftertaste. The blossoming of talent was brief and fragile, and once the danger became apparent, the many representatives of Jewish culture — in Yiddish, Hebrew, Russian, and German — quickly departed on their respective political, linguistic and geographical journeys. They left Berlin for America, Poland, the Soviet Union or Palestine. Never again would Jewish culture see such multi-faceted creativity in one place.

Marc Caplan’s new book, “Yiddish Writers in Weimar Berlin: A Fugitive Modernism”, considers Yiddish literary production in Berlin in the broader cultural context of the 1920s. The heroes of his study are three writers at the center of the Yiddish literary canon: Dovid Bergelson, Der Nister and Moyshe Kulbak. Caplan brings their work, which was written during their Berlin sojourn, into dialogue with other, mostly German-language authors. At times, one can discover direct influences, but for the most part the book proceeds according to the thematic, conceptual and aesthetic resonances among writers.

These three writers, according to Caplan, were “representative of a larger phenomenon of refugees from the east, both Jewish and non-Jewish, seeking reprieve from the political instability and physical dangers of life … ensuing from the breakup of the Czarist Empire.” In this respect, their works aren’t just masterpieces of Yiddish modernism, but also serve as a collective testimony of their time and place.

Caplan contends that it is because Yiddish literature was on the margins of the European cultural mainstream that these works allow us to understand better the aesthetic innovations of that era. Yiddish writers in Eastern Europe had respect for German culture, and the German-Jewish intelligentsia during the First World War correspondingly “discovered” an “authentic” Jewishness among their Eastern European Jewish brethren. In Berlin, both Jewish communities could meet together for the first time.

These figures dreamed of a better future, where Jews and their culture could find a secure place for themselves. The question was always where this place could be: in the coming Jewish state being built in Palestine? in the communist Soviet Union? or perhaps in the cultural-nationalist autonomy of the new nations of Mitteleuropa? The fate of the three figures in Caplan’s study was tragic. They all perished in the Stalinist purges of the Soviet Union in the 1930s and 50s. But the focus of Caplan’s research deals with this earlier period. He examines the “aesthetic and emotional complexity of what they managed to create in the midst of their confusion and ambivalence in Germany.”

In the first part of the book, the Yiddish writer Dovid Bergelson meets with the German-Jewish author, Alfred Döblin. These writers reveal for their readers the new world that had emerged from the ruins of the former Russian and Austrian empires. In particular, Döblin focuses on the new nation-state of Poland, while Bergelson writes about the Soviet Union. A decade earlier, these nations were all part of a single territory; now they were bitter military and economic enemies. Not coincidentally, as Caplan observes, the theme of death is pronounced in their respective works. Döblin’s “Journey to Poland” depicts the old Hasidic culture there as obsolete, while Bergelson pronounces a death sentence on the Pale of Settlement shtetl in his novel “Judgment.”

But there is also a significant distinction between Bergelson and Döblin. For Döblin, the new Poland was a land of opposing nationalities — Poles, Ukrainians, Jews, and Germans — who had very little in common. In Bergelson’s Soviet Union, by contrast, Jews were being compelled to become a part of the new society; otherwise, they would have no future. Here it’s worthwhile to observe that Döblin’s portrait of Polish Jewry is not so melancholically one-dimensional. In Vilna, as opposed to Warsaw, he finds a Yiddish-speaking population that was completely modern in its culture and lifestyle. Again it’s no coincidence that it was in the Vilna publishing house of Boris Kletskin that Bergelson’s collected writings appeared at the same time that Döblin was writing about Poland in his travelogue. Among these works by Bergelson was his novel “Judgment.”

Caplan reads Bergelson’s short stories set in Berlin as reflections of the style of “New Objectivity” (Neue Sachlichkeit). This was a modernist aesthetic movement that was popular in German literature and art in the second half of the 1920s. Material objects serve as metaphors in Bergelson’s depictions of the impoverished immigrant life in Berlin and of the spiritual isolation and uncertainty of the Jewish refugees in a strange and vast city. Caplan recognizes in this melancholy depiction signs of the coming traumatic crisis that would befall Europe in the 1930s.

In contrast with Bergelson, Kulbak and Der Nister, who also spent several years in Berlin, never depicted the city in their writing from that period. Yet, German culture did spark their imagination, Caplan writes. In the stories that Der Nister wrote during his time in Berlin, Caplan recognizes influences from works of literature and film that appeared during that period. Particularly important in this respect is the influence of the novel “Professor Garbage” (“Professor Unrat”), by the German author Heinrich Mann, and the film “The Blue Angel,” influences which can be seen in Der Nister’s last “Symbolist” novella, “Behind a Fence.”

Responding to Caplan’s analysis of the German influences on Der Nister’s story, one can add that “Behind a Fence” was published three years after Der Nister had returned to the Soviet Union. Its central motif of public trials reflects allegorically on the Stalinist purges, which Der Nister himself would eventually fall victim to. While Der Nister’s fantastic stories reflect allegorically on the downfall and collapse of the surrounding world, Moyshe Kulbak’s messianic visions played out in the landscapes of his Belarussian homeland. In the poem “Raysn” (“Belarus”) and the novel “Meshiekh ben-Efraim” (“The Messiah of the House of Joseph”), which were Kulbak’s principal works during his Berlin period, one encounters a tale of creation and the apocalypse, both set in the primordial landscape of his native Belarus.

“Yiddish Writers in Weimar Berlin” is not an easy read. The book is full of sharp insights and bold statements, which at times can raise incidental doubts in the reader’s mind. At the conclusion of his study, Caplan compares the Weimar period in Germany with the situation today, when “we are once again living in an age of rapid technological obsolescence and political fragility.” In such historical circumstances, a fantastic and allegorical perspective on the world becomes especially attractive. Caplan’s book is a work of creative critical research on modern Yiddish literature, particularly well-suited to the contemporary historical moment.