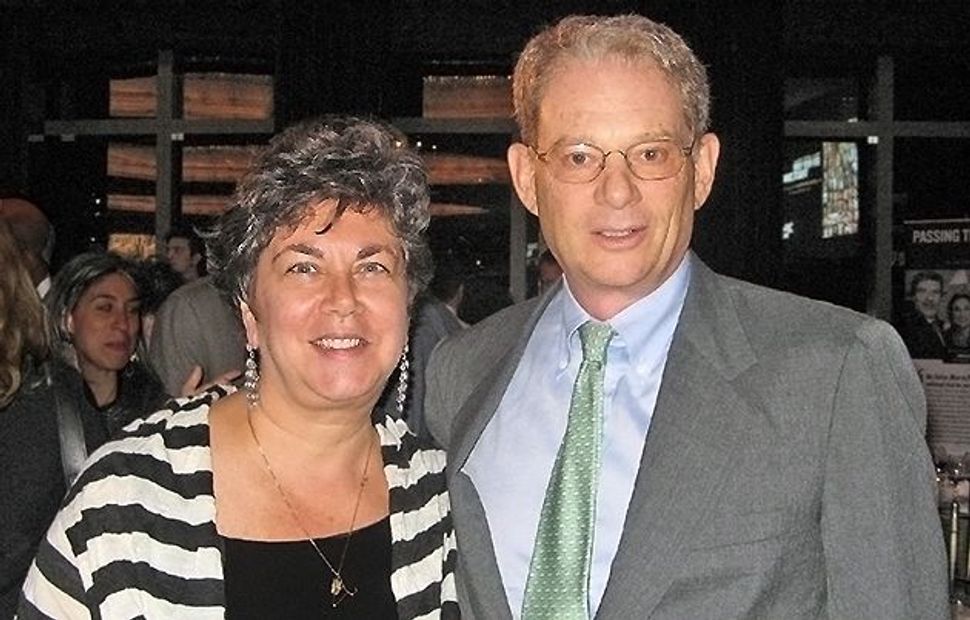 “There are traditional forms of anti-Semitism…. There is Holocaust denial…. There is also growing Holocaust glorification,” keynote speaker Hannah Rosenthal said at the United States Holocaust Memorial Museum’s New York tribute dinner, held June 2 at the Mandarin Oriental hotel. Rosenthal, President Obama’s special envoy to monitor and combat anti-Semitism, addressed “Holocaust revisionism and relativism — where government agencies, museums, academic research and the like are grouping the lessons of the Holocaust with other repressive regimes.”

Tom Bernstein, museum chairman, made the presentation to honorees Oliver Stanton, co-owner and a director and senior vice president of Transammonia, Inc., and his wife, Elizabeth. The Stantons are members of the Founders Society, a group of philanthropists who have contributed $1 million or more to the museum. They are also lead sponsors of the museum’s “Voices on Antisemitism” podcast series. Rosenthal touted the podcast as having been “viewed by 35 million visitors from more than 100 countries… [and having] helped educate people around the world about the consequences of unchecked hatred.”

Among the 45 podcast participants — which include U.S. Supreme Court Justice Ruth Bader Ginsburg, Elie Wiesel and imam Mohamed Magid, president of the Islamic Society of North America — is Frank Meeink. In a clip from a podcast, Meeink, who described himself as “a former skinhead,” says he was “turned around after nobody would give me a job and I was hired by a Jew.”

Rosenthal informed: “Our State Department uses [Jewish Agency for Israel Chairman] Natan Sharansky’s framework for identifying when someone or a government crosses the line — when Israel is demonized, when Israel is held to different standards than [other] countries…. I am now involved in a major training initiative for State Department employees and have initiated a trip for all interns and new Foreign Service officers of state to visit the museum so they can better monitor what is happening in their countries, and [to] sensitize them to the various forms of anti-Semitism.

“As a child, I was aware of the Holocaust, because it was a household word. It was in my DNA. My lens of understanding was through my father, Rabbi Franz Rosenthal…. My father was the only family member to survive Buchenwald and Auschwitz…. Other families had large gatherings filled with aunts, uncles, cousins, grandparents. My family reunions could fit at one of [these dinner] tables with chairs left over…. [At the museum’s archives] my daughter, Shira, was able to find the actual deportation orders for my family members. I now know that my grandparents Mitzie and Heinrich Rosenthal died on May 28, 1942. And now I can say Kaddish, appropriately on their yahrzeit.”

At the Museum of Jewish Heritage — A Living Memorial to the Holocaust’s Spring Women’s Luncheon, held June 2 at the Pierre, Auschwitz survivor Stella Levi was interviewed by the museum’s archivist, Bonnie Gurewitsch. The feisty Levi was born in 1926 in Rhodes, one of the Dodecanese Islands in the Aegean Sea. “I spoke Italian, French, some Greek, [but] my first language was Ladino [Judeo-Spanish]…. There were Jews in Rhodes since Roman times…Turkish, Italian, Mediterranean influences.” In August 1944 the 1,700 Jewish citizens of Rhodes were shipped to Athens. “Ours was the longest convoy to Auschwitz,” Levi said. “It was eight days by three small boats to the mainland, then 14 days by train to Auschwitz…. In the camp, my sister and I were especially vulnerable. We spoke no Yiddish, no German…. The women welcomed us with all kinds of insults: ‘You are not Jewish!’ We convinced them via prayers. She recalled a woman named Miriam, of Lille, in one of the barracks.: “In the worst of times, she would say to her fellow inmates, ‘Come on. Let’s dance!’ and she would dance to ‘La Cumpacita.’ That’s the kind of spirit I would like to pass along.”

Levi’s survival saga includes a death march to a sub-camp of Dachau, where she and her sister were liberated by American troops in 1945. “Of the 1,700 men, women and children deported from Rhodes, only 152 survived,” Levi said. Among the nearly 300 lunch guests were 100-year-old author Bel Kaufman, sitting next to not-quite-100-year-old photojournalist and author Ruth Gruber.

Here are some of Levi’s prewar Rhodes recollections: “It was a life filled with Jewish rituals…. the holidays. [On] Shabbat we went to the Turkish bath. We would kiss our mothers’ hands and the hands of our grandmothers, who would give us the blessing. We’d sit outside singing songs of España. The dearest holiday of all was Pesach. The women would start cleaning house, room by room. [beginning with] the day after Purim. By Pesach the women were exhausted!” In 1947. Levi and her sister arrived in Los Angeles, where they joined members of her family who had immigrated before the war. ***|***|*

“As soon as we know a person is Jewish, we take the crucifix off the wall before [the patient] is brought into the room,” Barbara Nitzberg, Calvary Hospital’s director of public affairs and community relations, told me during the hospital’s June 7 awards gala, held at the Pierre. “We care for 600 to 800 Jewish patients a year. We celebrate all the Jewish holidays.”

At past Calvary dinners, the hospital’s Jewish chaplain, Charles Rabinowitz, would tell stories of the sensitive care the hospital offers its patients. A few days after this year’s dinner, Rabinowitz told me: “We get the full spectrum of Jews. We have a cultural Jew who told me he’d lived across from a synagogue in the Bronx. His parents had hoped to send him to a yeshiva. There was not enough money for a bar mitzvah, and he lamented not having had a Jewish education. At Calvary, for the first time, he gets to watch a Shabbat service on [Calvary’s] Channel 19. He tells me, ‘Now, for the first time, I am able to study Torah.’”

Calvary Hospital’s president and CEO, Frank Calamari, offered welcoming remarks, and the Calvary Compatior Award, in memory of Dawn M. Greene, was presented to Dr. Thomas Fahey, senior vice president emeritus of Memorial Sloan-Kettering Cancer Center and chairman of the board at Calvary. Past honoree Steven Golub, vice chairman of Lazard and chairman of the board of the Calvary Fund,, presented the Calvary Medal to Carlos Hernandez, managing director of Global Head of Equities and Prime Services at J.P. Morgan Investment Bank.

When the National Yiddish Theatre — Folksbiene’s “The Adventures of Hershele Ostropolyer,” directed by Eleanor Reissa and starring Mike Burstyn, opened in June 2010, it got rave reviews. I got to revisit the musical June 16 with an Israel Cancer Research Fund theatre party. Burstyn and the cast were as sharp as on opening night. During the post-performance question-and-answer session, a young woman with a thick Scottish burr congratulated the cast. Burstyn called out to her,“ I didn’t know there were Jews in Scotland!” She shouted back, “There are 5,000 of us in Scotland!” This musical closes on June 26, so there is still time to catch it. The show is guaranteed to boost your immune system.