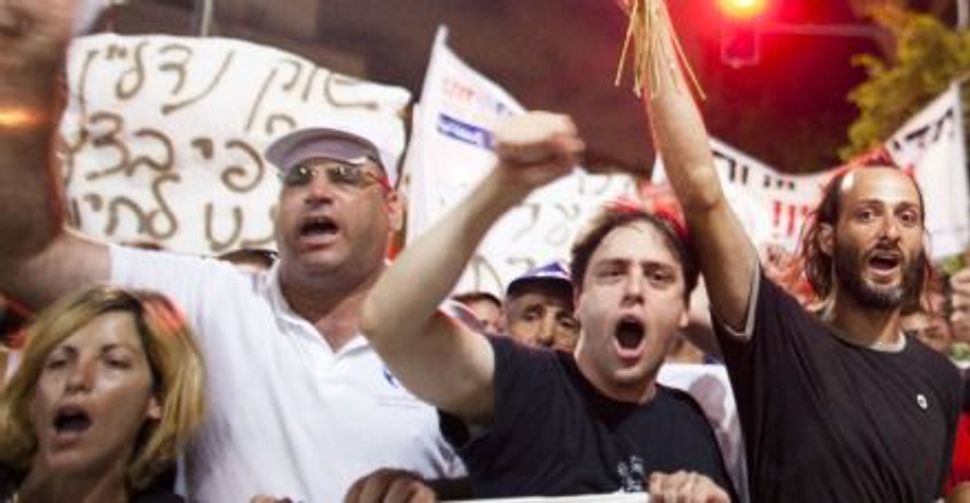 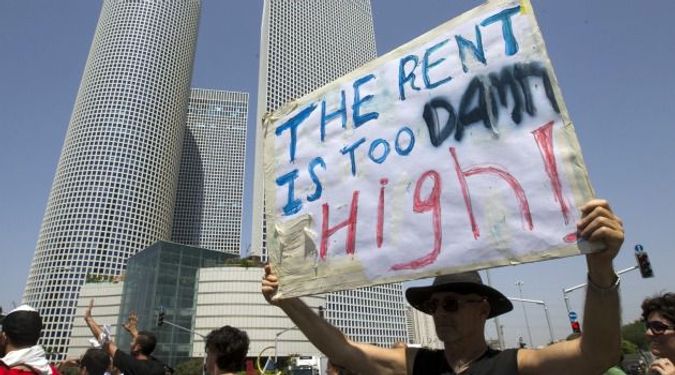 Israeli Summer: Massive protests over soaring rent and the cost of living have shaken the government of Benjamin Netanyahu. Image by Getty Images

Faced with thousands of young Israelis taking to the streets, Prime Minister Benjamin Netanyahu has unveiled a new proposal to solve Israel’s housing crisis and, he hopes, stem a grassroots protest movement whose popularity has shaken his government.

In a speech from his office July 26, Netanyahu announced that for the first time in Israeli history, the government will give contractors incentives to build housing for long-term private rental at low rates.

Netanyahu’s speech came as 350 tents lined Tel Aviv’s fashionable Rothschild Boulevard, filled with people demonstrating against high housing prices. More than 500 protest tents were pitched elsewhere in the country. A few hours before Netanyahu’s speech, Haaretz released a poll finding that 87% of Israelis supported the protests. Three days previously, about 30,000 Israelis marched for the cause in Tel Aviv. Netanyahu put other political business on hold and tried to quell the anger.

“In Israel protests by specific groups happen daily, but this has brought in many groups and become massive,” said Ben Gurion University historian of social economics Efraim Davidi. “It is the most important protest in a generation.”

Under Netanyahu’s proposal, the government will offer free state-owned land to contractors willing to compete to build homes for long-term rental at the lowest prices. Netanyahu’s program will also offer half-price land for sale where contractors compete to promise the lowest sale price. Young couples, graduates, and people finishing military or civilian national service will have priority when these homes reach the market.

Netanyahu also promised to build 10,000 new dormitory units for students, allowing them to pay rents set by the state, not by private landlords. In a bid to make living outside big cities more practical, he will also offer half-price train and bus fares for students who commute to university.

As they watched his speech on televisions set up in the Rothschild Boulevard “tent city,” protesters booed and mocked Netanyahu’s proposals. “It’s like giving an aspirin to a cancer patient,” Oren Pasternack, one of the protest organizers, told the Forward. Like most of the leaders of this new movement, Pasternack is not connected to any political organization or nongovernmental organization.

Housing prices in Israel rose on average 16.4% — or 13.43% above the rate of inflation — last year, and far more in big cities, Global Property Guide, an online financial guide for real estate investors, reported in February. At the end of 2010, the price of the average Tel Aviv home had reached $500,000. Meanwhile, salaries were barely keeping up with inflation.

As a result, worries about housing have spread from the poor to people who consider themselves — based on their family background, education and/or profession — to be middle class. “This is the disillusion of the educated people,” said Adam Burd, 28, gesturing toward the tent where he slept during the protest. “We, as children, were sold the story that if you finish the army, go to university or college and get a job, you’ll be okay.”

Burd lives with his parents in Hod HaSharon because, despite six years of training in massage and other therapies, he does not earn enough to rent his own place. “The fact that we can’t even afford to live is what’s bringing us out,” he said.

As with many revolutions these days, the call to pitch tents originated on Facebook. Daphne Leef, 25, became so dismayed at rent levels when she went house hunting that she called for a protest. On July 14, a week after she posted her appeal, the first protesters arrived. Since then, Tel Aviv’s tent city has developed a rhythm and lifestyle of its own. There is an ad hoc canteen with signs announcing the mealtime schedule, electricity via extension cords from nearby buildings and a range of meeting places where people chill and chat. In one of them, Burd helped people relax from the stresses of activism by giving free head massages.

The tent dwellers said they were there to stay, and have given their tents “addresses,” with a number sewn onto each tent’s canvas. There is even a tongue-in-cheek street sign. Erez Dascal, a 29-year-old sound technician who holds a degree in music and theater from Haifa University, was lounging shirtless on a sofa and looking at home when the Forward visited. Dascal moved out of his Tel Aviv apartment and terminated his lease to live under canvas until the government offers a housing crisis solution that meets his satisfaction. Dascal said that the confidence to protest what he acknowledged was a long-standing problem came from the Arab spring. “It’s all linked. The Arabs, Spain, Greece — all the world is waking up,” he said.

Some experts have been predicting a welling of anger from the middle class for a long time. Yuval Elbashan, a Hebrew University lecturer in poverty law, told the Forward in October 2009 that while the government knows how to address poverty, “it doesn’t know how to deal with the problem of the middle class.” Elbashan, who is also deputy director of Yedid, a national network of economic advice centers for Israeli citizens, said of the current protests, “I was disappointed to discover I was right.”

The protesters say that Netanyahu’s new propositions divide the middle class by helping the specific demographics leading the protest without helping broader society. “He’s trying to divide and conquer, and we won’t accept it,” said tent city leader Barak Segal, a 28-year-old student from Ramat Gan. He insisted that the fight would continue until a comprehensive solution for the whole housing market was found.

In Segal’s telling, Netanyahu’s plan amounted to no more than a “bribe” to the specific groups that would benefit: students, young couples, graduates and people finishing military or civilian national service.

The Coalition for Affordable Housing, a conglomeration of academics and not-for-profits that includes the Association for Civil Rights in Israel and Bimkom — Planners for Planning Rights, also criticized Netanyahu’s plan as too narrow. “This is not a struggle of one sector or another, but a broad social one,” a coalition spokesman told the Forward. Opposition leader Tzipi Livni, chairwoman of Kadima, said that Netanyahu was simply “trying to take down tents, not build homes.” She accused him of “spewing slogans that won’t solve the social problem.”

Even the group that stood to benefit most directly from Netanyahu’s plan, the National Union of Israeli Students, which pushed hard for the university dormitories, vowed to stay in for the long haul. “The prime minister is offering students an unprecedented benefits package and this is appreciated,” it said in a statement. “However, the students are fighting for all Israeli society and not only for themselves.”