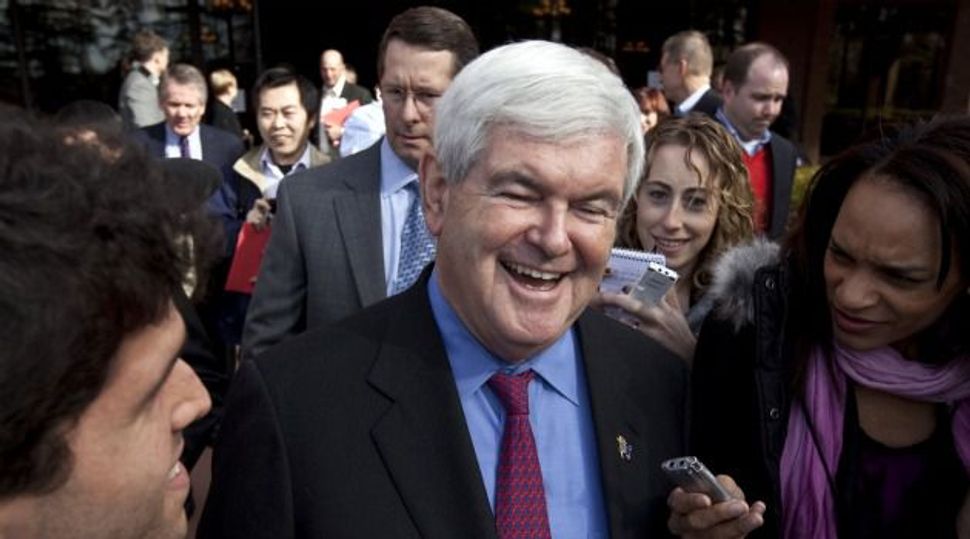 In a conference call with Jewish activists, organized by the National Council of Young Israel, Gingrich made clear Palestinians won’t have an easy time in Washington if he gets elected president. Gingrich said he would stop aid to the Palestinian Authority if it does not live up to the standards he will set, which include ending incitement against Israel.

READ THE FORWARD’S GROUNDBREAKING STORY ABOUT GINGRICH’S ALLIANCE WITH SHELDON ADELSON AND HIS LONG FRIENDSHIP WITH BENJAMIN NETANYAHU.

He also expressed his opposition to a demand that Israel freeze its settlement activity in order to enter negotiations with the Palestinians. Calling the peace process “absurd”, the former Speaker of the House of Representatives said that in the current setting, there is no reason for Israelis to slow down it settlement activity and give up on “maximizing their bargaining position.”

In an interview he taped earlier this week with The Jewish Channel — the video is embedded below — Gingrich went a step further and denied the existence of a Palestinian people. “I think we have had an invented Palestinian people who are in fact Arabs,” Gingrich said.

In his call with Jewish activists on Friday, the leading Republican candidate provided some insight into his thoughts about Israeli politicians. Not surprisingly, Gingrich’s favorite Israeli leader is Prime Minister Benjamin Netanyahu, who he sees as a “personal friend” ever since they first met in the 1980’s, when Netanyahu served as Israel’s ambassador to the U.N. “I have a warm spot in my heart for Bibi,” Gingrich said, “I like him a great deal.”

As reported in the Forward this week, Gingrich and Netanyahu also share a common supporter – Casino mogul Sheldon Adelson, who is one of Gingrich’s top financial backers and the publisher of a pro-Netanyahu daily newspaper in Israel.

The former House Speaker did surprise his Jewish audience by praising some of Israel’s Labor Party leaders. David Ben-Gurion, according to Gingrich, is “Israel’s George Washington.” He also praised the late Yitzhak Rabin, who approached Gingrich back in 1994 and warned him of the looming threat from Iran’s nuclear program.

Gingrich, in his Friday conference call, repeated his commitment to move the U.S. embassy from Tel Aviv to Jerusalem as soon as he takes office and explained that the reason former Republican president George W. Bush failed to live up to a similar commitment he made prior to the 2000 elections was the “State Department culture” that eroded his ability to make this move.

Asked for his opinion on Israel’s prisoner swap with Hamas in which about 1,000 Palestinian prisoners were released from Israeli prison in return for captive soldier Gilad Shalit, Gingrich refused to second-guess the decision of the Israeli government. However, he said that since 30 of the Palestinians released were involved in terror attacks against U.S. citizens, he would instruct the CIA to “hunt” down those released terrorists.