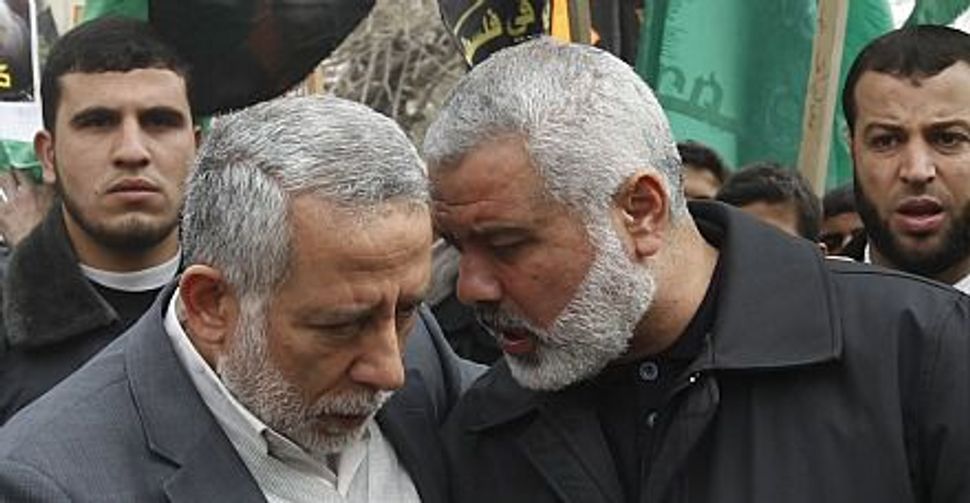 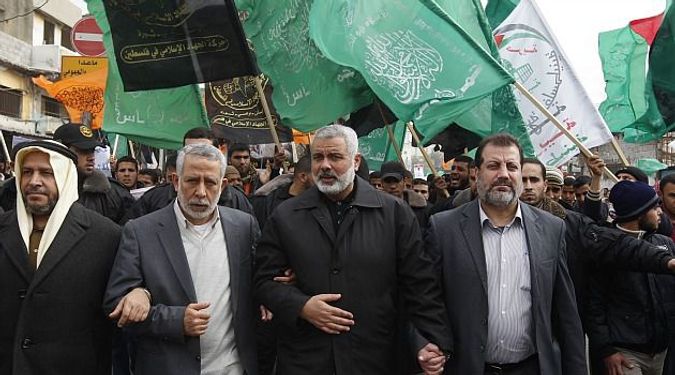 Hamas Still Outside: The Islamist Hamas movement has had a major falling out with the regime in Syria. So far, the spat has not led to a rapprochement with the U.S. or Israel. Image by getty images

In foreign relations, it is a longtime maxim that “the enemy of my enemy is my friend.” But despite its recent shift against the regime in Syria, that rule has done nothing, so far, for Hamas with the American government.

The abrupt smashing of a decades-long bond between Hamas, which is designated by the United States as a terrorist organization, and Syria, a family-led dictatorship, is unlikely to facilitate Hamas’s rehabilitation, experts say, despite current efforts by the U.S. to assemble a wide coalition against the Syrian regime.

Hamas’s decision to turn its back on embattled Syrian president Bashar al-Assad and side openly with those seeking to overthrow him may, for the first time ever, give the group a common goal with the United States and the West. But American officials have made it clear that as long as Hamas fails to disavow terrorism and refuses to recognize Israel, it is not a welcome partner in the international effort to replace the Assad regime.

Long headquartered in Damascus, Syria’s capital, Hamas, an Islamist group that controls Palestinian-populated Gaza, is now seeking a new haven for its external leadership. As this search goes on, some within Hamas are calling for a more moderate approach toward Israel and toward the Palestinian Authority, led by the more secular-oriented Fatah faction. But others believe that changes brought on by the Arab Spring should embolden the group against outside pressure to moderate.

“Hamas feels that the region is coming their way,” said Robert Danin, a senior fellow for Middle East and Africa studies at the Council on Foreign Relations. He noted that revolutions in the Arab world had brought to power parties affiliated with the Muslim Brotherhood, Hamas’s parent movement. “They feel they are on the right side of history,” Danin added.

While Hamas has controlled the governing apparatus in Gaza since ousting Fatah in a 2007 coup there, Hamas’s external leadership has been based in Damascus since 1999. The Assad regime in Syria offered its top political leaders, Khaled Mashaal and his deputy, Moussa Abu Marzouk, freedom of action in their violent struggle against Israel after Jordan expelled the group in 1999.

But as Assad’s crackdown on opposition demonstrations has grown more violent in recent months, Hamas began quietly reducing its presence in Damascus. In late February, Mashaal moved to Qatar and Abu Marzouk settled in Cairo. ”Practically, we are no longer in Syria because we couldn’t practice our duties there,” Abu Marzouk said in a February 26 interview with The Associated Press. He added: “We are not with the regime in its security solution, and we respect the will of the people.”

The move from Syria is related, experts believe, to Hamas’s position as a Sunni movement stuck in the midst of a struggle of fellow Sunnis against a minority regime in Damascus dominated by Alawites, a spin-off sect of Shi’ite Islam. As violence in Syria grew, the Sunni-oriented Hamas could no longer be associated with Assad, so it chose to break off and side with the rebels.

“In a weird way this strengthens Hamas, because it no longer has the liability of being associated with Syria and its oppressive regime,” said Danin, a former senior adviser on Middle East issues at the White House and State Department.

The break with Syria also distanced Hamas from Shi’ite Iran, another longtime supporter, and from Hezbollah, the Lebanese Shi’ite faction.

The United States and its Western allies are locked in conflict with Iran and also oppose Hezbollah, as well as the Syrian regime. But Hamas’s moves away from these anti-Western regional forces does not seem to be bringing it any closer to cooperation with Washington.

“Our position on Hamas has not changed,” a State Department spokesman told the Forward. “Hamas is a designated Foreign Terrorist Organization.” The spokesman added that all parties working for freedom in Syria “have an interest in ensuring Al Qaeda and Hamas cannot take advantage of the situation.”

Recently, Secretary of State Hillary Rodham Clinton cited Hamas’s new stand in arguing against providing arms to Syrian rebels. “Hamas is now supporting the opposition,” she noted in an interview with CBS News. ”Are we supporting Hamas in Syria?”

In the build-up to the 1991 Persian Gulf War, President George H.W. Bush persuaded some unlikely partners, including Syria, to join the American-led military coalition against Iraq’s invasion of Kuwait. This endowed the anti-Iraqi military force with a breadth of support that had few precedents in the fractious region. But this time around, few see a comparable place for Hamas as opponents of Assad struggle to coalesce against his regime.

“The fact that Hamas left Syria doesn’t have any bearing on what Hamas is,” said Matthew Levitt, a terrorism expert at the Washington Institute for Near East Policy. “They left because they couldn’t operate there, not for any other reason.” Hamas has yet to accept the conditions set by the international community, which include giving up terror, accepting Israel’s right to exist, and adhering to previous agreements between Israel and the Palestinian Authority.

Meanwhile, Hamas is also deeply riven internally. Mashaal, representing the group’s external leadership, still supports a national unity government agreement that Hamas forged with the Fatah faction centered in the West Bank. Under their agreement, the two parties are to share power in a new Palestinian government that will rule both the West Bank and Gaza.

But that agreement is under attack by Hamas leaders in Gaza — the so-called internal leadership — and now seems far from implementation. The result is a power struggle within the movement.

“The movement has lost the pretense of cohesion,” prominent Israeli-Arab affairs commentator Ehud Yaari wrote in a February 27 column published in The Times of Israel. “The battle over command and direction is on.”