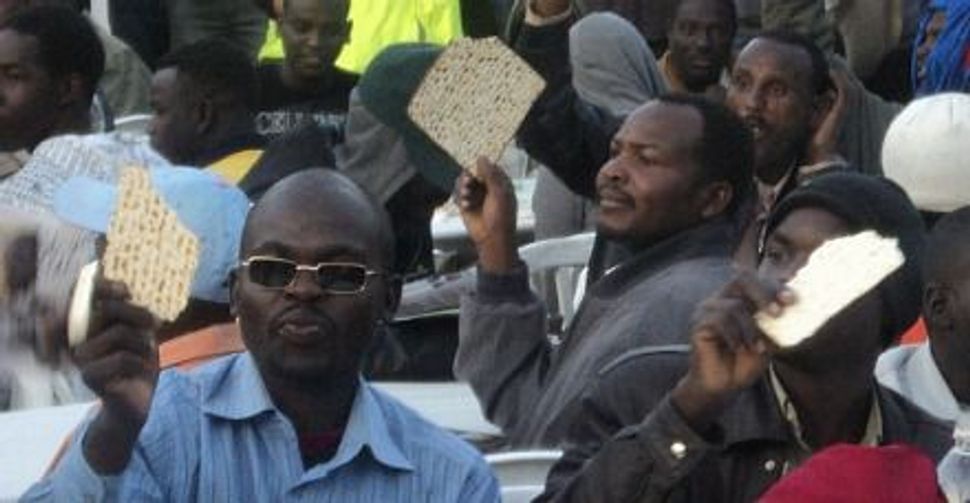 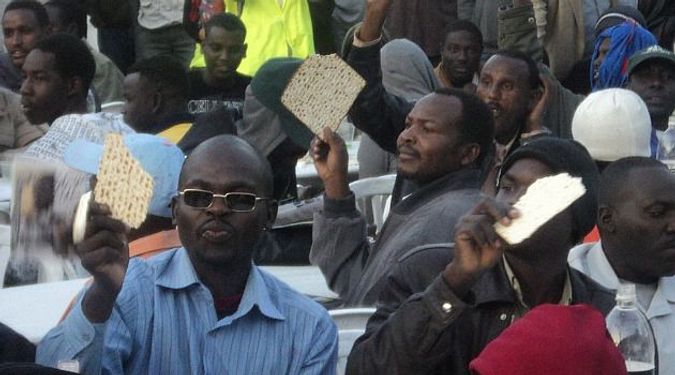 Free for Now: African immigrants wave matzos at a special Seder in Tel Aviv. Although they are Christians or Muslims, many of the newcomers experienced the Passover story firsthand in escaping from dictatorship and destitution in their homelands. Image by nathan jeffay

Why was the night of April 4 different from all other nights in Tel Aviv? Because the illegal immigrants who ordinarily collect the city’s trash, wash dishes in its restaurants, and clean floors in its hotels, sat as Israelis served them dinner.

For Africans who have come to Israel — some 50,000 since 2005 — Passover is starting to acquire a very poignant significance. This was their Seder.

While Jews often struggle with the Haggadah’s instruction to “see themselves” as if they personally left Egypt, for the 600 Muslim and Christian Africans at this Seder, it takes little imagination.

Having eaten his fill of matzo, Henok Brohane, 26, said that he felt just like an ancient Israelite. He left Egypt just seven days before the Seder, dodging soldiers there who shoot at Africans on the run like him, and praying that he would not find himself held ransom or beaten by traffickers as many do.

“I feel something good — I don’t know how to describe it,” he told the Forward. “As Moses brought them by the means of God, we prayed to God in the desert and made it here safely.”

Abdu Alle, a Sudanese 28-year-old who crossed the Egypt-Israel border seven months ago, spoke of a similar connection to the Exodus. “”It’s an important story because it remembers people just like us,” he said.

For Brohane, a Christian who fled poverty and a culture of religious persecution by the state in his native Eritrea, Israel is a modern promised land.

“When we reached the Israeli border from the Sinai, soldiers received us, gave us food and shoes, and took us to hospital where they checked everything,” he said.

On April 4, it took just a few minutes for the smell of hundreds of matzos being waved in the air to overpower the odor of urine that usually lingers in Tel Aviv’s grimmest green space, Lewinsky Park. A text about the matzo’s symbolism in the Israelite journey to freedom was read in Arabic, Tigrinya, Hebrew and English.

The 600-plus guests at the open-to-all event were mostly Eritrean Christians and Sudanese Muslims. Out of deference to the latter — and to save costs — there was no wine, but rather soft drinks. The Haggadah placed on tables, and read over microphones from the front, was customized to emphasize the relevance of Passover to them.

“Today tens of thousands of our brothers and sisters are fleeing countries run by modern day Pharaohs,” it declares. “Fleeing brutal dictators and organized murder, running for their lives. Many of you here today made the same journey across the same desert. You have arrived here in Israel hoping to find freedom and rebuild your lives.”

While many of those in attendance, like Brohane, felt it was an occasion to celebrate their arrival in Israel, there was also reference to the problems facing newcomers. As South Sudan is now independent Israel wants to deport illegal immigrants from there, though they did recently win a reprieve until the fall. There are government efforts to stop them from working. And a large detention facility is under construction where the state hopes to incarcerate new arrivals, instead of allowing them free movement as is now the case.

A British immigrant to Israel, Nic Schlagman, came up with the idea of the “Refugee Seder” four years ago. He recalled: “I was volunteering with refugees, and one of them asked about Passover and we started talking, and I thought: what better way to appreciate the freedom story of Passover than to share a meal with those who had been through journeys like theirs.”

That year he organized the Seder in Lewinsky Park, a popular hangout for new immigrants. It attracted 500 people.

Schlagman, who is now humanitarian coordinator at the African Refugee Development Center nonprofit, has since managed to get numerous organizations to support the annual Seder, including Amnesty International and the United Nations High Commissioner for Refugees.

Once the service was over and the immigrants tucked in to curry, rice and soup served by volunteers, they spoke of their enthusiasm for the sharing of traditions that was underway. Zak, a 36-year-old Muslim who arrived from Sudan in the fall, said that he was fascinated by the “very holy story” and by the fact that it is also mentioned in his religion (given his illegal status he declined to give his last name).

Amsalem Man, a 35-year-old Sudanese who has been in Israel since December, said that he hoped that experiencing Passover would help him and other immigrants to start acculturating to Israel. “We need to make strong connections between Israeli culture and our culture,” he said.

The food finished, a disco with African beats went on late in to the night. The well-known Israeli musician Idan K was on the turntables.

“Because of what my family went through in the Holocaust,” he shouted to the Forward over the blaring music. “I feel I should give something.”