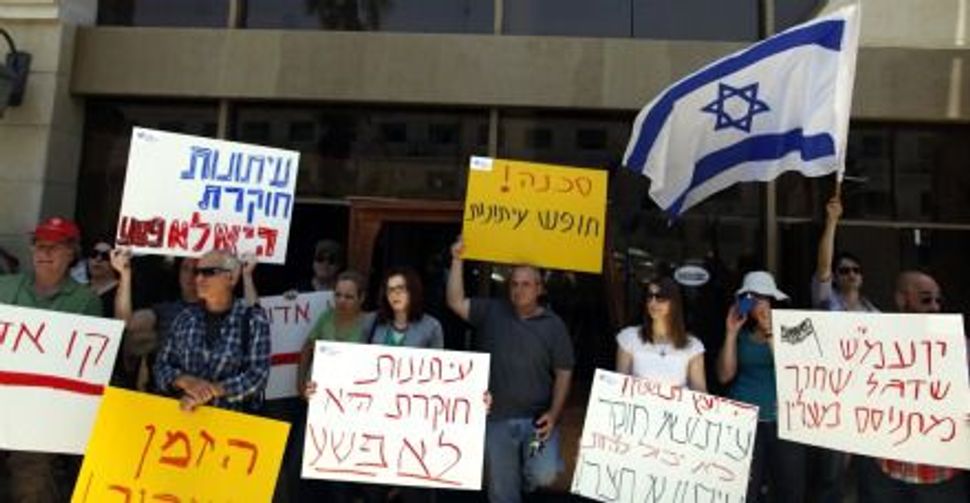 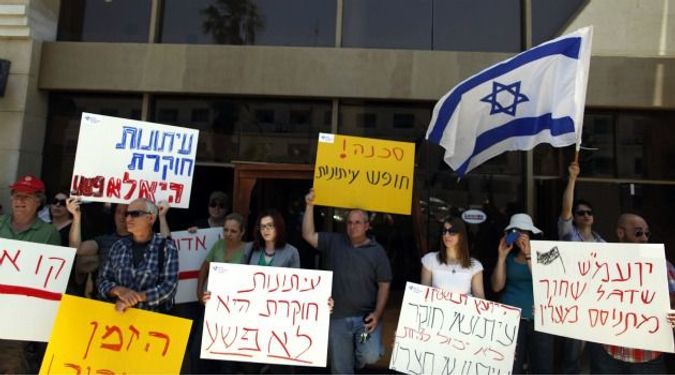 In Israel’s highly polarized public square, the ideological lines dividing the country’s major media outlets are clear to all. Among daily newspapers, Haaretz stands on the left, Yediot Aharanot in the center, Ma’ariv on the center-right and Israel Hayom, owned by American casino mogul Sheldon Adelson, on Israel’s nationalist right.

But the government’s recent decision to prosecute a prominent investigative journalist for what the prosecutor is publicly calling “espionage” has provoked a rare consensus among seven of the country’s highly competitive defense correspondents from these and other media outlets.

The indictment of Haaretz investigative reporter Uri Blau, the journalists declared in a May 30 public statement, represents “the crossing of a red line that constitutes a dangerous precedent for press freedom in Israel.”

Notable among the signatories was Yoav Limor of Israel Hayom. Haaretz’s own defense correspondent, Amos Harel, was not a signatory. The newspaper itself has declined to comment on the issue, as has Blau.

Channel 10 TV’s senior defense correspondent, Alon Ben-David, who signed the statement, told the Forward that he sees Blau’s indictment for possession of military documents as an affront to his profession, which brings accountability to the defense establishment by keeping the public informed about its work. “That’s what I do for a living — I collect what we call secret information,” he told the Forward.

It was on May 30 that Attorney General Yehuda Weinstein announced that he would soon indict Blau, who published a series of stories that purported to expose wrongdoing — including an alleged wrongful assassination — by Israeli security forces, based partly on a cache of more 1,500 classified documents. Blau obtained copies of the documents from Anat Kamm, a woman then serving as a soldier in the Central Command. Kamm has said she was motivated by what she viewed as shocking military misconduct.

Kamm, who passed hundreds of classified military documents to Blau during her army service, is now serving a prison term of four and a half years for her actions, under the well-established principle that the person who actually purloins a classified document in violation of her security clearance is the one exposed to legal risk.

Blau’s possession of these documents was also a violation of Israeli law, but one that has been, until now, routinely accepted by the state under the unwritten rules of jounalists’ privilege.

On June 3, a crowd of about 50 protesters, including many journalists, gathered outside the Justice Ministry with placards warning that press freedom was in danger. “Am I also a spy?” asked one of the placards a journalist carried.

Though Weinstein’s office announced that Blau would be indicted on “espionage” charges, it is not claiming that he intended to harm state security or spied for a foreign government. The prosecutor claimed instead that the case is serious because the “potential for damage” from Blau holding the documents was “enormous.”

The attorney general’s office declined to comment to the Forward, but its statement on the indictment said that it had taken account of the importance of “preserving the character of the press in Israel as a free press.”

Kamm gave Blau her stash of documents in the summer of 2008, but the army didn’t know about them until November of that year, when Blau published a story that angered top military brass. Citing and even reproducing documents to support his story, Blau suggested that Israel had violated strict guidelines issued two years earlier by the Supreme Court by assassinating Palestinian militants in so-called “targeted killings” — for example, by killing even when the target did not pose an immediate security threat. He also published some other stories via the documents.

In September 2009, Blau was summoned by Shin Bet, Israel’s domestic security agency, regarding the targeted assassinations story and told to return the documents. The agency guaranteed that it would not question him about his source, nor would it use the documents to reach the source or as evidence. Blau transferred 50 documents he deemed relevant to the agency’s inquiry.

Three months later, Kamm was questioned and placed under house arrest. In the course of Kamm’s questioning, it emerged that there were many more documents — a further 1,500 — which Blau still retained. He eventually returned these, in October 2010. The attorney general’s office acknowledged that Blau had been offered immunity, but wrote that he was facing indictment after breaking his commitment by holding on to the other documents. This implies that the agreement required the return of all documents — though this is something that has never been confirmed by either Blau or Haaretz.

Blau’s staunchest backers say that he did what any journalist would have done, both in acquiring the documents and trying to hold on to them. “The issue is simple,” Haim Har-Zahav, a board member of the Israel Journalists Association and organizer of the June 3 protest, told the Forward. “As journalist, we see classified papers, and any journalist given such a treasure from Anat Kamm would have been very glad. And obviously we keep these documents for future stories.”

Har-Zahav, who works as an editor at Channel 3, said: “We fully understand the message. If I was a young newspaper man and was given such a treasure of documents, I would think twice and consider that maybe I should not take them, so it will lead to self-censorship.”

Blau’s colleagues at Haaretz have stood firmly by him. The newspaper claimed that the attorney general’s decision “is unfortunate and sets a precedent in terms of its ramifications on the freedom of press in Israel, and especially on the ability to cover the security apparatus.”

Even among Blau’s critics in journalistic circles — and there are many — there is near-consensus against the indictment. Ben-David, who signed the correspondents’ letter to the attorney general, told the Forward that in his view, Blau practiced “poor journalism” in his handling of the papers and should have returned them when promised.

Another senior defense correspondent, who spoke only on the condition that he not be named, was vociferous in his disapproval of Blau’s actions — but said that self-censorship is now a real fear. “It could deter any of us. Not everyone will go to jail or use all their money to defend the profession,” he said. “It’s a way to freak out a journalist.”

For Ben-David, the main worry is the leverage that indictment can give officials. In his analysis, if there is now a precedent for indicting journalists who hold documents without authorization, every defense journalist will be avoiding indictment based on only the government’s goodwill. “All of us should be worried,” he said. “We upset the administration, and someone could decide they are going to use [indictment as a weapon] against us.”

One of the few arguments defending the indictment came from Ben Dror Yemini. Though he works for Ma’ariv, where defense analyst Ofer Shelah signed the correspondents’ statement, Yemini wrote, “There is no need to jump on board with allegations of infringement of freedom of expression when the story here is holding on to operational plans, deceit of authorities, and breach of contract.”

Notwithstanding Yemini’s claim that the circumstances with Blau are exceptional, the indictment looks set to change how aspiring journalists in Israel are taught to operate. Rafi Mann, author of one of the few Hebrew-language textbooks for journalists in training, said that in contrast to the old wisdom that the more documentation to back up a story the better, he may now advise students to avoid retaining documents. Mann, a former staffer at Ma’ariv who today is a journalism and communications lecturer at Ariel University Center of Samaria, in the West Bank, said that he would advise journalists to consider with editors and legal advisers “if there are some documents better to just copy its contents, highlights or main contents, but not hold on to the original document.”

While Blau’s alleged crime is headline news today, the alleged transgressions in targeted assassination procedure that he publicized, which started the whole saga, have largely been forgotten.

What began as a possibly illegal assassination long ago has become known as the Kamm or Kamm-Blau affair, and claims that could have led to a serious probe into military conduct were long ago dismissed by Weinstein’s predecessor, Menachem Mazuz. In 2009 he quietly refused a request to investigate the claim that the Israel Defense Forces had defied the Supreme Court, stating that it acted correctly. Mazuz revealed his decision 15 months after he made it, by which time it was public that Kamm was under house arrest for a year and indicted, and she was the focus of public attention.

“The same institutions that show zero tolerance to those involved in the stolen material have shown complete impotence to deal with suspicions arising from the stolen documents that… the Israeli army has violated Supreme Court rules,” complained Michael Sfard, the attorney who initiated the Supreme Court case on assassinations. He added, “When I compare the reaction of authorities to the two violations [the army’s alleged violations and Blau’s violation], it shows a glaring gap in how law enforcement handles matters that makes me very uncomfortable.”