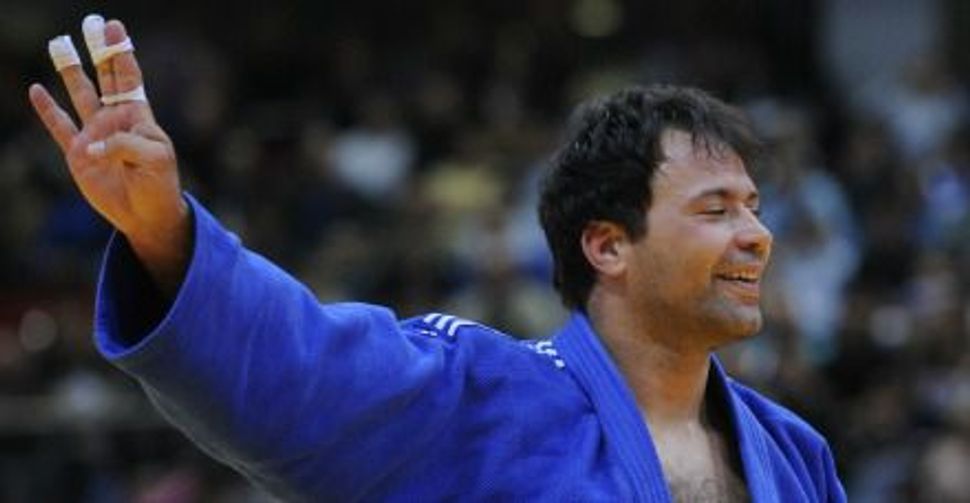 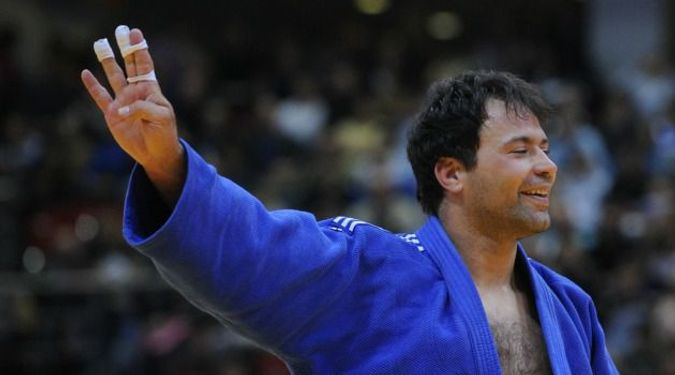 Judo Guys: Arik Ze?evi is the old man of the Israeli Olympic team at 35 and Alice Schlesinger is one of the newcomers. Both have good chances to win medals in London. Image by getty images

One is nearing the end of his career, already has an Olympic medal and is eyeing another. The other is a decade younger, an up-and-comer who has enjoyed some success but is aiming for her first medal at the Games.

Ariel “Arik” Ze’evi, 35, and Alice Schlesinger, 24, are standouts on the Israeli Olympic judo team and two of their nation’s best medal hopes at the London Games that begin later this month.

Ze’evi won bronze eight years ago in Athens and expects to win a medal this year after faltering in Beijing in 2008.

Holding a camera while the Israeli media photographed him on Sunday, Ze’evi sounded like a soon-to-be retiree going on vacation. He talked about “enjoying the experience” and “staying calm.”

Beneath the relaxed air, however, was a determined and optimistic veteran. Ze’evi won the gold medal at the European Judo Championships in April, and as the 38-person Israeli Olympic delegation’s senior member, he has emerged as one of its leaders.

“I’m very calm, but there’s still time” before the Olympics, he said. “We don’t prepare for failure. We don’t set up scenarios where we don’t succeed. It’s better to have positive thoughts.”

Ze’evi says he is “sure” that these are his last Olympics. If he were to participate in Rio de Janiero four years from now, at age 39, he would “compete with little kids,” he said.

Another bronze-winning Israel judoka is heading to London: Oren Smadja is one of the five-person judo team’s coaches. Smadja, 42, believes that the medal he won in 1992 paved the way for more recent Israeli successes in judo, like Ze’evi’s bronze in Athens.

“[My] medal led to people practicing,” said Smadja, who acknowledged that he prefers competing to coaching. “I don’t remember a delegation this strong. Some of [this year’s] team didn’t think they could get into the Olympics. With my dedication and desire, I think I was” one of the impetuses for the team’s strong performance.

The Israeli judo team is coming off a strong performance at the European matches, where it earned four medals. Ze’evi and Smadja are hoping that Schlesinger finds her way to the podium at the Olympics.

“She’s been [training] with me since she was 16,” Ze’evi said of Schlesinger. “I’ve seen her go from a promising athlete into one of the best in the world.” Smadja calls her “a serious candidate for a medal.”

Schlesinger, who is “very satisfied that Arik is 35 and still competing,” voices cautious optimism about her chances in London. She did not win a medal in Beijing but has since won three bronzes – at the 2009 world championships and at the 2009 and 2012 European championships.

But unlike Ze’evi, who sets the bar high for himself, Schlesinger says only that she hopes to “go home in peace” from London.

“Like everyone else I want a medal,” she says, “but I want to enjoy it.”

Smadja notes that “not everybody says ‘I’m going to win a medal.’ ”

Close relationships and judo have always come together for Schlesinger. Her brother introduced her to the sport as a child, and she attributes her success to her parents, who would take her to competitions on weekends.

“To be in such an intense situation and be so close makes the experience different, makes it fun,” she said.

Schlesinger says her romantic relationship relieves stress from practices rather than augmenting it.

“Between every coach and athlete there are moments of tension,” she said. “But we have to solve them because we have to go home [together] at night.”