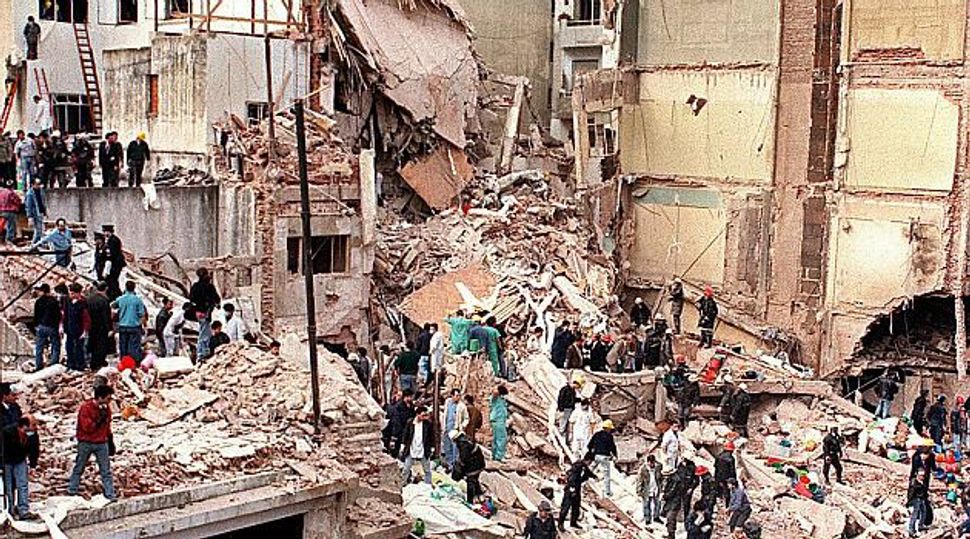 Deadly Day: Rescuers pick through the rubble of a deadly 1994 blast that struck a Jewish center in Argentina. The bombing of a bus in Bulgaria took place 18 years to the day after the Buenos Aires bombing. Image by getty images

The suspected terror attack that killed at least seven Israeli tourists in Bulgaria came on the 18th anniversary of a deadly Hezbollah bombing in Argentina, providing a tantalizing clue to the possible perpetrators of the attack.

The bus bombing also came six months after the Israeli government reportedly requested that Bulgaria increase security precautions for Israeli tourists after a bomb scare on a bus carrying Israelis to Bulgaria from Turkey.

“Eighteen years exactly after the blast at the Jewish community centre in Argentina, murderous Iranian terror continues to hit innocent people. This is an Iranian terror attack that is spreading throughout the entire world. Israel will react powerfully against Iranian terror,” he said.

Experts suggested at the time that Hezbollah, the Lebanon-based Shi’ite militia, was planning attacks on Israelis in the southeast European nation to mark the fourth anniversary of the death of Hezbollah commander Imad Mughniyeh. Mugniyeh is believed to have been assassinated by Israeli operatives.

Hezbollah denied any connection to the attack. A representative from the group told Lebanese media outlets that “we will not seek revenge over the death of Imad Mughniyah by harming tourists.”

Hezbollah secretary general Hassan Nasrallah was scheduled to speak later Wednesday evening in Beirut, according to Hezbollah-linked media outlet Al Manar. The speech marks the anniversary of the 2006 war between Israel and Hezbollah.

Bulgarian media reported in January that extra police and army troops had been assigned to provide higher levels of security at a resort popular with Israelis.

Bulgaria, a country of 7 million people in southeast Europe, has a large Muslim minority. The country has relatively little recent history of terrorism.

The attack came on the 18th anniversary of the bombing of a Jewish center in Buenos Aires, Argentina. Though no one has ever been charged with the bombing, Israeli government investigations have placed blame with Hezbollah and the Iranian government.

Up to seven people were killed when the explosion struck a bus carrying Israeli tourists in a Bulgarian resort town, according to reports.

The blast took place near the airport in Burgas, a popular vacation spot near the Black Sea. The explosion took place at 5:30 p.m. local time.

Bulgaria shares a porous border with Turkey, and experts have warned that Islamic extremists might be able to sneak across and carry out attacks.

Meryl Steigman, Executive Director of the Bulgarian American Society, said many Bulgarians were shocked and outraged by the terror attack.

“I believe Bulgarians will also be appalled because of their history with the Jews,” Steigman said. “Jews in Bulgaria have long been considered not an other, but Bulgarian.”