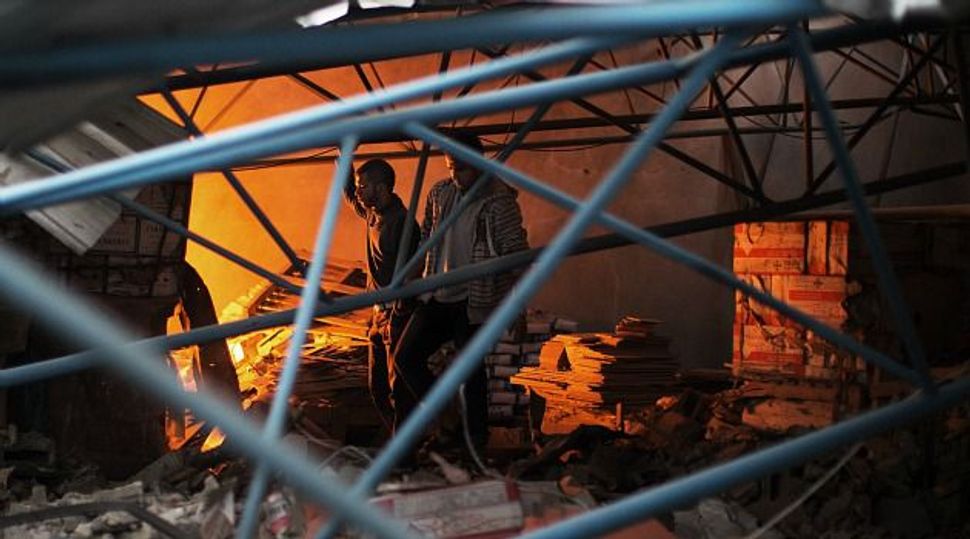 The defiance of Gaza’s armed struggle bombards the senses in the city streets.

Shrieks of outgoing rockets from downtown launch pads receive an encore of whistling youths, honking horns and celebratory calls of “God is Great” from mosque loudspeakers.

Martial songs blare “Strike Tel Aviv!” from one of the few cars daring to chance the roads.

But fatalism rather than triumphalism defines Gazans’ reaction to the Israeli air assault that began on Wednesday, and a feeling that no matter how deep the pain, their experience is not without precedent and will not soon end.

A man was executed in the street this week accused of spying for Israel. Hamas has warned that price-gougers trying to exploit the coming shortages of food and medicine will be dealt with harshly. Hardship is neither new nor shocking.

Gaza has seen it all before. The last Gaza war, a lopsided three-week-long Israeli air blitz and ground invasion in 2008-2009, left more than 1,400 Palestinians dead, mostly civilians. Israel lost 13 killed.

Whole city districts were flattened by giant Israeli army bulldozers clearing a firebase for invasion troops and tanks. Factories were destroyed, concrete houses were pancaked, with their dismal owners cooking over campfires in the ruins.

In such situations, the need for food and shelter is paramount, and Gaza’s Islamist Hamas authorities know it.

Patrons of the few stalls still open in Gaza City’s Firas souq don’t flinch at the buzz of Israeli surveillance drones overhead or the occasional crash of air strikes. They are inured to the clash of war.

But the prospect of another long round of fighting and another Israeli invasion is casting a shadow of worry over shuttered businesses and cash-strapped families.

“When it all started we bought enough to feed our family for a week. Food could run out or get so expensive we can’t afford it. No one can say when it will end. What can we do?” Ahid Fadl, 18, whispered amid the muddy, open-air shops.

Hamas police officials have attempted to soothe nerves by promising government and market supplies can withstand what may be a punishing days- or weeks-long round of combat, and passed blame for painful prices on rogue merchants and profiteers.

“The Palestinian police considers anyone who tries to monopolize goods or inflate prices a partner of the (Israeli) occupation’s aggression and we will deal with these traders firmly,” said Hamas police chief Tayseer Al-Batsh.

Such announcements have spooked store-owners, caught between the scorn of customers with little money and a wartime government, they have little recourse but to protest their patriotism and blame Israel.

“We praise the government for its steadfastness and its position,” said Ali Jarrousha, standing before his sacks of grain emblazoned with international aid agency.

“Of course some prices have changed around due to the situation, but we Palestinians have experienced worse aggression at Israel’s hands, and we’ll persevere,” he said.

The crowd of shoppers around him appeared unmoved.

Eighty percent of residents in the coastal enclave live below the poverty line and real wages have declined by ten percent since 2005, according to the U.N.

Deprivation is nothing new to Gaza’s population, mostly descended from refugees, and even peacetime brings no abundance to one of the most densely populated plots in the world.

But times of extraordinary hardship like these appear to be testing the patience of a blockaded territory that the U.N. predicts will be “unliveable” by 2020, unless there is radical infrastructure and economic development.

The long-standing shortfall in medical supplies is biting just as Gazans need them most, and threatens to further exasperate families dealing with wounded members.

“There isn’t enough medicine, and in this situation, we don’t know how long it will stay like that,” said Um Ahmad Hasan, a Gaza resident whose child was wounded during the strikes, as she waited anxiously in a Gaza hospital.

Horrific scenes take on an a surreal aspect.

Doctors displayed the body of boy – locals said he was killed by an Israeli airstrike – holding his lifeless body and dangling limbs at arm’s length in front of the frantic camera shutters and video lenses of the Gaza press corps.

Then he is whisked away, the dispersing crowd careful not to slip in the bright red blood on the tile floor.

“We were surprised that the explosion was so big,” he said, standing next to a deep crater. “It destroyed the grapes, the iron and all the land. We really lost a lot. But in the end, Thank God we lived.”