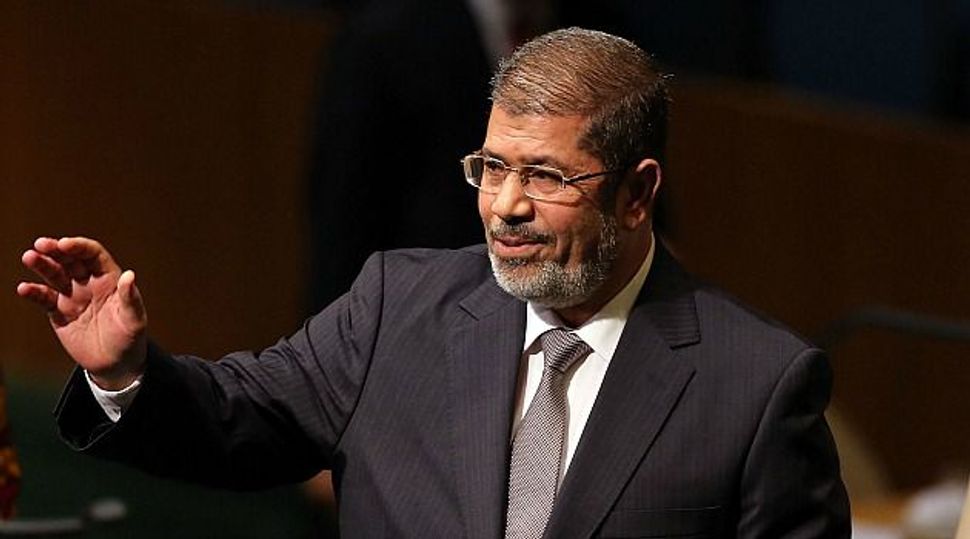 Walk Like an Egyptian: With the Gaza crisis, President Mohammed Morsi has a chance to prove newly democratic Egypt?s importance on the world stage. There?s still work to do. Image by getty images

An already strained relationship between Egypt’s emerging new democracy and the United States, its biggest financial supporter, was put to its first major test following the recent explosion of violence in Gaza.

Each side’s expectations of the other ran high after Israel launched a bombing offensive in Gaza in retaliation for rockets launched from there into Israel by the militant group Hamas. While publicly backing Israel’s right to defend itself, the Obama administration hoped to see Egypt’s president, Mohamed Morsi of the Muslim Brotherhood, step into the role played by his authoritarian predecessor, Hosni Mubarak, who helped rein in Hamas, the ruling faction in Gaza.

The new Egyptian leader, on the other hand, looked to President Obama to pressure Israel to curb its bombing, allowing Morsi to show his constituents that working with Washington pays off.

It was still unclear at press time whether expectations on either side had been fulfilled, but Egypt’s central role in the cease-fire reached November 21 was undeniable. The deal was announced in Cairo by Secretary of State Hillary Rodham Clinton with Egypt’s foreign minister by her side. Clinton thanked Morsi for playing a pivotal role in the negotiations and for “assuming the leadership that has long made this country a cornerstone of regional stability and peace.” Obama called Morsi to personally thank him for formulating the agreement that ended eight days of fighting.

For Washington, the matter was straightforward. “We believe that they have the stature, the credibility and the relationships to be able to persuade Hamas and its allies to stop,” said a senior State Department official briefing the press November 17, referring to Morsi’s government. “And so our message to them has been use it. Use those things.”

But for newly democratic Egypt, this was a tall order. Morsi, elected from the Muslim Brotherhood on a promise to turn the page on the Mubarak regime and everything it came to symbolize, did not assume the unquestioned centrality of good relations with Israel and the United States. While wanting to maintain aid and good will from the United States, he was uncomfortable with the role America planned for him, and with the imminent clash with its ally, Hamas, that this role required.

“Morsi was faced with two opposite powers,” said Shalom Cohen, who served as Israel’s ambassador to Egypt from 2005 to 2010. “On the one hand he wants to signal inwards that this is a government based on different values and policies, and on the other hand he wishes to signal to the international community that he is a responsible player.”

In past crises involving Hamas and Israel, Washington, which regards Hamas as a terrorist group and will not engage in talks with it, turned to Egypt as the sole regional power enjoying relations with both sides. Egypt, in turn, pushed Hamas to accept a cease-fire agreement. It was a practice honed to perfection during the Mubarak years, with Egypt’s former intelligence chief Omar Suleiman and other Egyptian officials using their ties to defuse tensions and keep a lid on violence.

This time, according to Dennis Ross, who served as President Obama’s top Middle East adviser, the newly minted Egyptian leadership was “in the middle of a terrible dilemma.” Morsi’s domestic constituents were pressing it to react forcefully to Israel’s attacks on Gaza, even by severing ties with Israel. At the same time, Morsi and his government recognized that any such act would lead to a cut in American and European financial aid to his cash-stripped country, ending any hope for economic recovery.

Morsi walked this tightrope carefully. Almost immediately after Israel initiated its bombing campaign on November 14, the Egyptian government called home its ambassador in Tel Aviv for consultations. And soon after, in a high-profile demonstration of solidarity, Morsi sent his prime minister, Hesham Kandil, to visit Gaza in the midst of Israel’s offensive.

In part because of such public shows of sympathy with Hamas, Washington viewed Morsi as having enough room for maneuvering in behind-the scenes-negotiations to bring the violence to an end. “Egypt,” Ross said, “has a huge stake” in succeeding as the regional moderator in this conflict. “Does Egypt want Hamas to dictate its future?”

This message seems to have resonated with the Egyptian leadership. By its forceful public demonstrations of solidarity, Morsi’s government clearly distanced itself from the practices of the previous regime. At the same time, Morsi stepped into the role of the key interlocutor, eventually working to broker the deal offered to Hamas and Israel. Cairo emerged, once again, as the hub of Middle East diplomacy, and while the United States did seek a role for Turkey as a possible go-between, it was Morsi’s new Egypt that led the negotiations.

But in this reshaping of relations between the United States and Egypt, demands have been raised on the Egyptian side, as well.

Washington’s full backing of Israel and the refusal to call for any limit to the latter’s airstrikes against Gaza had irked the Egyptian leadership. But some long-time observers noted that’s what had to happen.

“The most critical thing the U.S. can do is vis-à-vis Israel,” said Daniel Kurtzer, the former American ambassador to Egypt and to Israel. Speaking on November 16, Kurtzer said, “This is a moment in which the U.S. can possibly whisper in the ears of Israel that it needs an exit strategy that involves Egypt.” This exit strategy, according to Kurtzer, should keep Egypt in the circle of Israeli–Palestinian diplomacy, despite tense relations between Jerusalem and Cairo ever since Morsi came to power.

Egypt’s main long-term point of contention with the United States centers on the financial aid it receives, which has been questioned by Congress ever since the Egyptian revolution. In addition to an annual military aid package of $1.3 billion, the Obama administration has sought to give Egypt $1 billion for debt relief. But recent attempts to release part of the money for immediate budgetary assistance were met with bipartisan resistance in Congress, which remains suspicious of the Morsi government’s Islamist ideology. Members of Congress noted the harassment of Christian Copts in Egypt following the Muslim Brotherhood’s ascent to power and reports of infringements on women’s rights.

Capitol Hill also criticized Morsi’s inability to prevent sporadic attacks on Israel from the Sinai desert and his government’s anti-Israel rhetoric. Despite this, the White House and the State Department stood with Morsi in his battle to ensure assistance from the United States. The administration argued forcefully that Egypt remained an important long-term ally despite the post-revolution changes in its policies — changes whose depth and breadth, the administration argued, Washington could influence meaningfully by retaining close ties.

The constructive role played by Egypt in solving the Gaza conflict may go a long way in helping the Obama administration to keep up the fight for aid to Egypt. On the flip side, congressional approval of the administration’s call to maintain foreign assistance to Egypt, should that occur now, will provide Egypt’s government with a rationale for reaffirming its role as mediator in chief between Israel and Hamas.