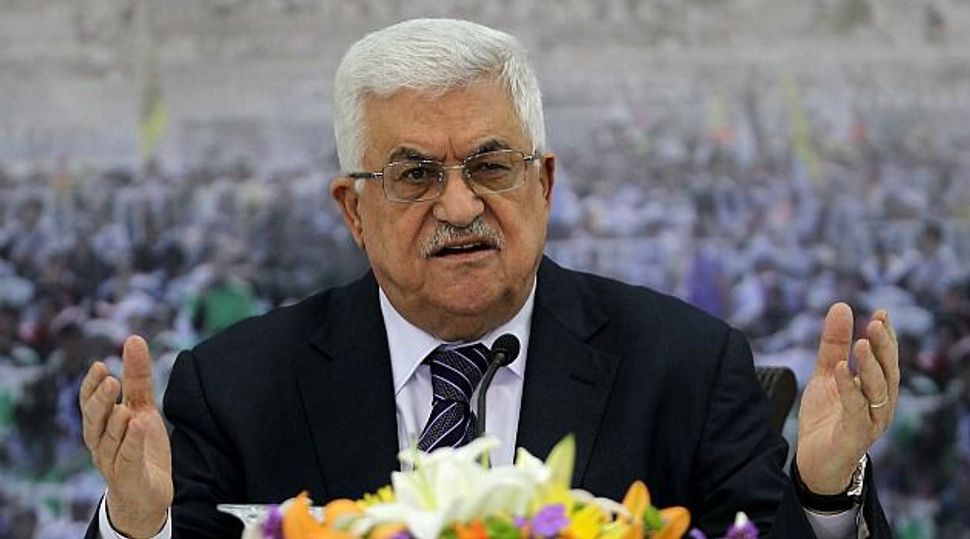 Bystander: Palestinian President Mahmoud Abbas has lost popularity among his people by staying out of Hamas?s fight with Israel. Did Israel?s campaign bolster the most radical Palestinian groups? Image by getty images

As Israel and Hamas worked with Egypt and the United States to broker a ceasefire during the long days of Operation Pillar of Defense, Israelis observed a strange irony.

Israel was talking to Hamas, albeit indirectly, at a time when the conversation about peace with its designated negotiating partner, the Palestinian Authority, has completely dried up.

In fact, the contact came as Israel-P.A. relations chilled further following several statements by the Foreign Ministry discrediting Palestinian Authority President Mahmoud Abbas. Israel also was furious with the P.A. for a new statehood bid the Palestinians planned to make at the United Nations on November 29.

It was not the first time that Hamas’s strong-arm tactics had moved Israel to negotiate with it, via proxy. Most notably, Israel made the deal with Hamas to release Gilad Shalit in exchange for 1,027 Palestinian prisoners a little more than a year ago after long negotiations, again through Egypt.

Many analysts have suggested that by putting Hamas center stage and making the Western-backed P.A. seem like a bystander, Israel is hastening the P.A.’s demise and emboldening Hamas. The operation began just two weeks before the planned start of the P.A.’s statehood bid, but that bid has now been overshadowed on the Palestinian public agenda by the situation in Gaza.

“The bottom line is that Hamas is more relevant,” said Yoram Meital of Ben-Gurion University’s Chaim Herzog Center for Middle East Studies and Diplomacy. “Israel’s image is as the side that refused to pay the price for peace, and most Palestinians see Hamas’s ‘resistance’ as more attractive and up to date, and the Palestinian authority as somewhat not relevant.”

But here is the key question: How long will Hamas will be able to keep attention on Gaza and retain its new image as the party fighting the Palestinian people’s battle while the P.A. stands by?

Walid Ladadweh, public opinion expert at the Palestinian Center for Policy and Survey Research, said that Hamas’s high popularity during the operation could decrease significantly in the weeks and months ahead if Abbas succeeds in his U.N. bid. “If Abbas has a good result, it will increase his strength,” Ladadweh said.

Eran Shayshon, senior analyst at the Israeli think tank the Reut Institute, conceded that Operation Pillar of Defense is causing an “expected short-term spike” in Hamas’s popularity. But this does not translate to a real shift toward Palestinian support for Hamas’s more violent path, he said, or to a desire to live under a more militant regime.

“Right now, West Bankers are sure they don’t want to become Gazans, because they saw where Hamas’s uncompromising attitude towards Israel got them,” he said.

Gershon Baskin, the Israeli peace activist who helped to mediate the Shalit deal, believes that the answer is in Israel’s hands. Unless Prime Minister Benjamin Netanyahu’s government shows Palestinians a glimmer of hope in the diplomatic process, Abbas and the P.A. could be doomed, he said. “This conflict could spell the end of Abu Mazen unless Israel engages him seriously now,” he said, using Abbas’s nickname.

Some analysts are optimistic that Pillar of Defense could promote a major advance in the Israeli-Palestinian conflict. Shalom Yerushalmi, a center-right journalist, wrote in Ma’ariv that the operation has brought into sight a day when Egypt will take over from Israel responsibility for Gaza. This is because the operation forced the new Egyptian government to involve itself deeply in the Gaza regime through its role as a hub for cease-fire negotiations. It even dispatched Prime Minister Hisham Kandil to visit Gaza — a gesture that even Abbas did not make.

Meital said that Egypt has rejected proposals to take responsibility for Gaza in the past and would reject them now, viewing Gaza’s population as a “threat to national security.” But a Foreign Ministry source told the Forward that a scaled-down version of this plan is “something that the Foreign Ministry is tossing around, and a relatively attractive idea.”

The source — who could not be named, as he was talking about discussions at the ministry as opposed to policy — said, “We would be quite happy for Egypt to take over as many responsibilities as possible that Israel currently has over Gaza.” This would involve controlling security and, to some extent, supplies until a comprehensive Israeli-Palestinian settlement is reached, he said. Cairo could be guaranteed an “exit strategy,” said the official, to ensure Egypt’s leaders they would not become fully responsible for the territory.