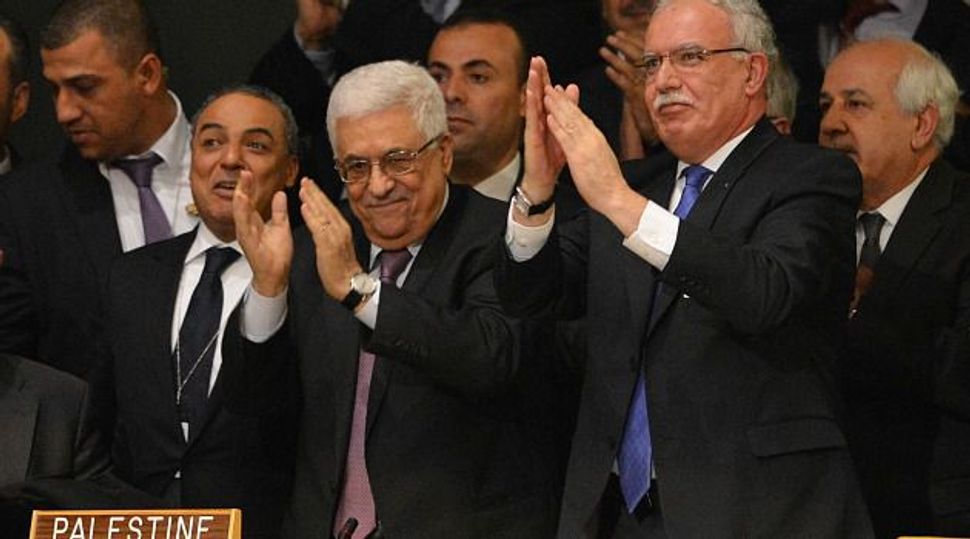 Premature Celebration? Mahmoud Abbas celebrated the Palestinian statehood win at the United Nations. But pro-Israel lawmakers are looking for ways to punish him for the audacious move. Image by getty images

Congressional supporters of Israel, seeking to punish the Palestinian Authority for its recent drive for recognition by the United Nations as an observer state, have set their sights on a conveniently local and long-standing target: the office of the Palestine Liberation Organization in Washington.

Earlier in December, a legislative proposal to downgrade the status of the PLO’s Washington delegation failed in the Senate following the U.N. General Assembly’s overwhelming vote in November to upgrade the diplomatic status of the Palestinian Authority in defiance of Washington and Jerusalem’s wishes. Undeterred, prominent House members are now pushing for a similar measure, backed by the pro-Israel lobby.

The initiative, an almost routine move when Palestinians take actions against the will of Israel and the United States, is a carefully calculated punitive step. Targeting the PLO delegation is viewed mostly as a means to signal displeasure with the Palestinians, while refraining from truly substantive changes in policy, such as closing down diplomatic and financial support from the United States for the P.A.

“This is no more than posturing,” said Philip Wilcox, a former U.S. consul general in Jerusalem and president of the Foundation for Middle East Peace. “It shows how congressmen are willing to bow to the wishes of (the Israel lobby) knowing the legislation will not go anywhere.”

Shortly after the November 29 vote at the U.N. General Assembly granting the Palestinians status as a nonmember observer state, Senate Democrat Chuck Schumer of New York and Republicans Lindsey Graham of South Carolina and John Barrasso of Wyoming sought to insert amendments to the defense spending bill that would have cut aid to the P.A. and closed the PLO office in Washington.

The measure was ultimately removed before the vote on the bill in the face of opposition to the provision from the Obama administration, vigorous lobbying against it by the dovish J Street lobby and a lack of active support for the proposal from the more powerful American Israel Public Affairs Committee pro-Israel lobby.

But on December 10, four top members of the House Foreign Affairs Committee revived the issue in a letter to President Obama. Signed by the committee’s outgoing leaders, Rep. Ileana Ros-Lehtinen (R-Fla.) and Rep. Howard Berman (D-Calif.), and by the committee’s incoming chairman, Rep. Ed Royce (R-Calif.), and future ranking Rep. Eliot Engel (D-N.Y.), the letter urged Obama to send a strong signal to the Palestinians, following the U.N. vote, “that such actions are not cost-free.”

“We can do this by closing the PLO office in Washington, D.C.,” the House members said. “We can also call our consul-general in Jerusalem home for consultations. We urge you to take these steps.”

To Maen Rashid Areikat, head of the PLO Washington delegation, such ritual exercises show that “some members of Congress spearheading these efforts don’t believe in a dialogue and open communication.” In a December 14 interview with the Forward, Areikat argued that such measures would harm interests of the United States, not just those of the Palestinians. “Whose interests will it serve? No one’s,” he said. “How can the U.S. advance peace if it’s not dealing with the Palestinians?”

The Palestinians’ official presence in the United States has evolved over many years, starting with a PLO information office that opened in 1978, when the policy of the United States prohibited any contact between American officials and the PLO, then designated as a terrorist organization. After the United States launched a diplomatic dialogue with the PLO in 1988, the PLO office became the Palestine Affairs Center. The office gained upgraded recognition following the 1993 Oslo Accords, and in 2010 it received its current designation as the PLO General Delegation. With this recognition, the office received permission to fly the Palestinian flag over its offices in Washington’s Dupont Circle.

Israel’s ambassador to the United States, Michael Oren, defended the congressional letter calling for action against the PLO’s diplomatic representatives. “When they violate agreements, when they describe Israel as a war criminal when it is defending itself from thousands of rockets, we think they should be taken to task on it,” Oren told the Forward.

In contrast to its neutrality during the push in the Senate to actually cut aid to the P.A., AIPAC is actively backing the House move, which has made targeting the Palestinian delegation a cornerstone of its response to the U.N. recognition. “AIPAC applauds this congressional leadership and urges a full review of America’s relations with the PLO, including closure of the PLO’s office in Washington,” the group said in a statement immediately following the U.N. vote.

On December 13 a spokesman for AIPAC confirmed that the lobby was backing the House members’ letter. Nevertheless, the House letter received only lukewarm support, closing on December 21 with 239 co-signers, 12 of them Republican and 67 Democrats. While still an impressive figure, the number of signatories is lower than that most AIPAC-backed letters receive. Recent congressional letters on issues relating to Egypt, Iran and the Palestinians all had more than 300 co-signers.

“I was shocked and disappointed to see people who I’d sat with regularly in the past two years signing a letter urging members of Congress to close our office,” Areikat said, referring to AIPAC’s lobbying.

To a great extent, the Palestinian ambassador’s response reflects the dichotomy of the relationship between the pro-Israel community and the PLO. Despite recent tensions, AIPAC and other Jewish groups maintain an open dialogue with Palestinian representatives, including those affiliated with the PLO delegation in Washington. The pro-Israel community has notably refrained from calling for a cut in financial aid from the United States to the Palestinian Authority, or for severing ties altogether.

Meanwhile, J Street, Americans for Peace Now and the Union for Reform Judaism have actively opposed even the more symbolic move of closing the office. In a statement, the URJ criticized the measure as an action that “would undercut the prospects for renewing the peace process leading to a two-state solution.”

From a practical standpoint, the chances of any action against the PLO delegation are slim. The House letter is not binding, and without congressional legislation it is up to the White House and the State Department to determine the level of Palestinian representation in the United States. The administration has made clear to Congress that it does not wish to see any action taken against the Palestinian delegation. But that may only underline the cost-free political value pro-Israel House members see in pushing their proposal.