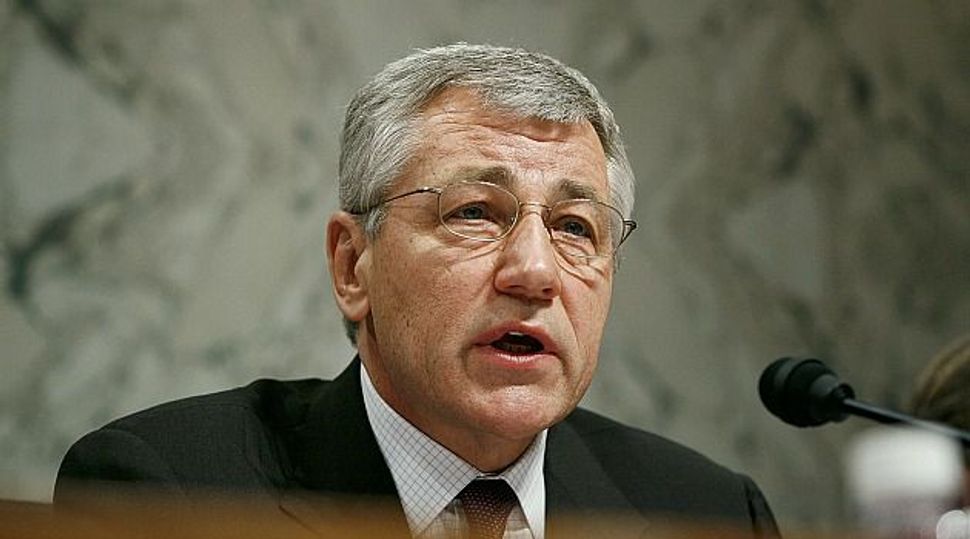 Nasty Fight: Chuck Hagel has had plenty of charges lobbed at him. The nastiest is the accusation that he is an anti-Semite. Image by getty images

With Chuck Hagel’s nomination as Secretary of Defense heading for tough confirmation hearings, the most explosive charge against the former Nebraska is that he displayed anti-Semitism in his relationship with Jews in his home state.

Former deputy national security adviser Elliott Abrams has sought to make Hagel’s supposed “problem with the Jews” a centerpiece of the fight to deny him the Senate votes needed to be confirmed as Pentagon chief.

Trouble is, Jews in Nebraska on both sides of Hagel’s confirmation fight emphatically refute the charge. “To make such an accusation you need to be very careful,” said Gary Javitch, an activist in Omaha, Nebraska’s biggest city, which has a community of about 6,500 Jews. “He never demonstrated anything like that in all the meetings I had with him.”

Javitch’s views may hold particular weight because he is no fan of Hagel. A lay leader in several Jewish organizations, he is considered by locals to an expert on the local Jewish political scene.

Javitch harshly criticized Hagel’s expressed views on Israel and the Middle East and did not appreciate his demeanor. “Every time we’d raise something about Israel, he’d filibuster us,” said Javitch, who met with Hagel both in Washington and in Omaha. The former Senator attended a B’nai Brith International “bread breaker” meeting at Javitch’s invitation, but gave the impression he thought Israel “should always do more” for the Palestinians.

Still, when asked if he thought the claims of Hagel’s bias against Jews had any merit, he responded flatly “No.”

Hagel’s home state Jewish newspaper is calling for a “wait and see” attitude on the controversial Pentagon pick, saying it hasn’t been convinced by either supporters or opponents.

Annette van de Kamp-Wright, editor of The Jewish Press of Omaha, wrote that Jews should “give the man a chance,” even as she pointed out that Hagel has occasionally made “clumsy” statements about Israel and Jews.

Abrams, in a January 7 interview with NPR, based much of his claims regarding Hagel’s “problem” with the Jews on a report quoting members of the local Jewish community expressing their dislike to Hagel and describing him as not accessible to the community.

“I think he has a chance at his confirmation hearing to show that he is not what he appears to be, which is frankly an anti-Semite,” Abrams said in the interview. When pressed by the interviewer, Melissa Block, on his claim that Hagel is anti-Semitic, Abrams replied: “I think if you look at the statements by Hagel, and then you look at the statements by the Nebraska Jewish community, about his unresponsiveness to them, his dismissal of them, his hostility to them, I don’t understand really how you can reach any other conclusion that he seems to have some kind of problem with Jews.”

Hagel also has many supporters within the Omaha Jewish community. A leading voice among them is Rabbi Aryeh Azriel, of the Reform synagogue Temple Israel. Azriel, who was born and raised in Israel, draws quite a different picture of Hagel.

The former Senator met with him for hours at the synagogue, discussing all issues relating to Israel, the Middle East and his own views, and called on Azriel before every trip he made to the region.

“He was interested in hearing my Israel narrative. He spoke about the Middle East, war and peace, about the military,” Azriel recounted. The claim of Hagel holding anti-Jewish prejudice is viewed by Rabbi Azriel in biblical terms. He sees the former Senator as a “sacrificial lamb.”

Official leaders of the Omaha Jewish community shut themselves out of the discussion over Hagel relationship to Nebraska’s Jews. Mike Silverman, the head of Omaha’s Jewish federation, forcefully refused to answer questions on Hagel. The local representative of the Anti-Defamation League would not return calls and emails.