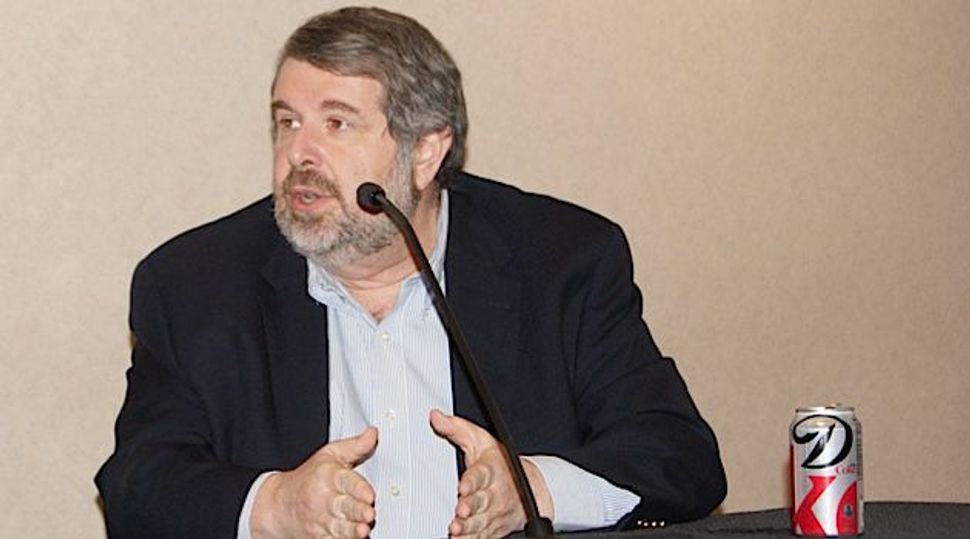 On the night of January 22, as polling stations closed in Israel’s national elections, Yair Lapid, the man about to emerge as the night’s greatest winner, was sitting with his inner circle. And as with many other Israeli politicians, that circle included a key American.

Mark Mellman, a veteran Washington-based political consultant for many American Democratic politicians, was hopeful that night as he awaited the results. But when they finally came in, even he said, “I must admit I was surprised.”

Because of budget constraints, Mellman, considered one of Washington’s top pollsters, had been unable to conduct much polling toward the end of the campaign. But by the night’s end, when it became clear that Lapid’s new Yesh Atid (There Is a Future) party had won 19 Knesset seats, catapulting it to Israel’s second-largest party, “there was a sense of elation,” Mellman said. Only Prime Minister Benjamin Netanyahu’s Likud-Beiteinu coalition had done better.

The Israeli election not only determined who will lead the country for the next four years and who will sit with the opposition; it also made for new winners and losers among some of America’s top political consultants who were drafted to help out many of the Israeli parties.

Like the candidate for whom he worked, Mellman, who was working his first campaign in Israel, became an instant star. Conversely, GOP consultant Arthur Finkelstein, considered for more than a decade to be the brains behind the ongoing success of the Likud and other right-wing parties, now shares the blame for the weak performance of Likud-Beiteinu.

Fresh off their November 2012 campaigns in the United States, half a dozen American consultants — all of them Jewish — assisted Israeli parties during this election cycle. Mellman led Yesh Atid’s campaign; Finkelstein and his partner, George Birnbaum, worked on Netanyahu’s campaign; the Labor Party relied on the services of Stanley Greenberg, and Kadima hired David Eichenbaum.

“American consultants bring a fresh perspective,” said Jim Gerstein, a Washington-based Democratic pollster who has worked on Israeli campaigns. He noted that an outside expert can provide professional, emotionally removed evaluations that others involved in the campaign sometimes miss. When Gerstein worked with Ehud Barak in 1999, he found himself at times serving as an arbitrator between different factions within the campaign.

Mellman, who is a member of an Orthodox synagogue in Washington and has family in Israel, met with Yair Lapid just as the TV host decided to step into politics. Mellman brought to the relationship an impressive portfolio of successful Democratic Senate and House races, as well as experience working with not-for-profit organizations and large corporations. He spent more than a month on the ground in Israel, helping shape Lapid’s campaign while measuring the temperature of the Israeli public and the public’s response to Yesh Atid’s centrist message. “He is the quintessential Israeli,” Mellman said of Lapid. “He understands the psyche of Israelis.”

One of the key decisions that Mellman made during the campaign was to break with the Israeli political tradition of spending campaign cash on billboard ads and focus Yesh Atid’s effort on Internet outreach. Israeli campaign advisers questioned the move, noting that streets are filled with other parties’ signs, but Yesh Atid succeeded in winning over younger voters, who use the Internet as their prime source of information.

American consultants working in Israel were struck by several structural differences between the political system they knew from home and that of Israel. Key to them is the finance issue. Israeli election laws limit donations significantly. Funding depends solely on government allocations. This makes for a low-budget operation, especially for small parties or newcomers, since the government’s financing is based on the size of the party in the outgoing Knesset.

TV ads also work differently in Israel. In the United States, television accounts for the main campaign expense, as candidates need to purchase airtime from local stations. In Israel, TV airtime is also allocated — at no cost — by the government, based on the party’s size.

American campaign advisers became active in Israeli political campaigns in the mid-1990s. Netanyahu, in his first run for office — in 1996, after the assassination of Yitzhak Rabin — recruited Finkelstein, a celebrated Republican pollster and strategist. The move, and Finkelstein’s success in winning that election against all odds, changed the face of Israeli campaigning. In 1999, Ehud Barak, then leader of the Labor Party, called on several American consultants who worked with Bill Clinton to help him beat Netanyahu. James Carville led the team, which also included Greenberg, Bob Shrum and Gerstein. Following Barak’s victory, Carville joked that the key to winning an election in Israel “came down to who got the all-important Jewish vote.”

Ever since, American advisers have been regulars in Israeli election campaigns on both sides of the political divide.

Finkelstein’s work on Netanyahu’s 1996 campaign began a years-long involvement in Israeli politics. Finkelstein, whose penchant for privacy and aversion to press exposure only heightened his aura as a behind-the-scenes genius, had already gained a reputation in the United States as a fierce strategist who taught candidates the importance of going on the attack and sticking to one message, that message more often than not being that their opponents were feckless or extremist liberals — a political label turned into an epithet. It worked well for such clients as U.S. Senators Jesse Helms, Strom Thurmond and Alfonse D’Amato, the last being one of Finkelstein’s earliest and closest clients, who won regularly with his help even in heavily Democratic New York. Finkelstein employed the same aggressive principles in Israeli campaigns.

In 1999, Finkelstein worked again with Netanyahu, in an unsuccessful bid for re-election. He later advised the campaign of Ariel Sharon, when Sharon became the Likud’s leader. And in 2008 he was part of Avigdor Lieberman’s winning strategy that made his party, Yisrael Beiteinu, Israel’s third largest. In between, Finkelstein also advised Jerusalem Mayor Nir Barkat.

But as poll numbers during the recent campaign began to indicate that Netanyahu was losing voters to Naftali Bennett’s Habayit Hayehudi party on the right and to Yesh Atid on the left, Finkelstein found himself targeted as the cause. The Israeli press quoted anonymous Likud activists blaming Finkelstein and his strategy for Netanyahu’s plunge.

Others, however, praised Finkelstein for one piece of advice that may have saved Netanyahu’s leadership position: It was Finkelstein who came up with the idea to merge the Likud’s list with that of Lieberman’s nationalist-oriented Yisrael Beiteinu party, creating a new political list called Likud-Beiteinu.

“It will be easier to win with a united right-wing bloc,” he said in a rare interview with Israel’s Channel 2 News this past October. He predicted that the new party would win 42 seats, a far cry from the 31 seats it ended up with. Nevertheless, many analysts believe that without the merger, the Likud could have come in as the second-largest party, paving the way for Lapid to become prime minister and sending Netanyahu to the opposition.

For Israel’s struggling Labor Party, the choice of Greenberg as an outside adviser came as no surprise. He had worked with the party for more than a decade. The results were mixed. Labor, headed now by Shelley Yachimovich, got 15 seats; this was more than it had in the outgoing Knesset, but not enough to help the party regain its status as one of Israel’s two major political powers.

The toughest task, however, faced Democratic consultant Eichenbaum, who worked with Kadima, led by Shaul Mofaz. The party was handicapped by four years in the opposition and by internal fighting that had led Tzipi Livni, one of its stars, to break off and form a new party.

“We went into this election with nothing,” Eichenbaum said in a January 28 panel discussion with Mellman and Gerstein, organized by the Washington DC Jewish community center. “There was no Kadima brand to hang on to.”

When the vote count was complete, it appeared that Kadima just made it, passing the minimum threshold. With two seats, it will be the smallest party in the Knesset. Eichenbaum said the lesson he took back from working with Kadima was how difficult it was, in Israel’s multi-party system, to unify the pro-peace camp. “I saw how easy it is for the left to do the circular firing squad,” he said.

This story was amended on February 20 to reflect the fact that Bill Knapp did not work on the 2013 election for Benjamin Netanyahu’s Likud-Beiteinu coalition.