Advocates for Religious Pluralism in Israel Buoyed by Election Results 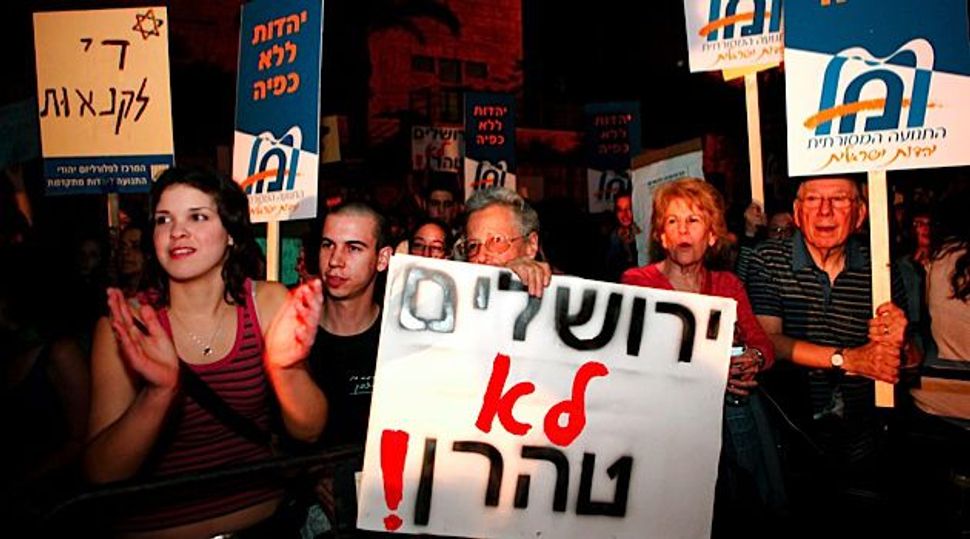 Cause for Celebration: Secular Israelis and Reform Jews proclaim ?Jerusalem is not Tehran? in a 2010 protest in Jerusalem. Image by Getty Images

Proponents of religious pluralism in Israel are in a jubilant mood these days, saying that the surprise results of the January 22 elections may lead to some of the momentous changes they have been seeking.

When the Yesh Atid (“There Is a Future”) party emerged as the second-largest faction, many saw it as a long-overdue message from the electorate that Israel’s Orthodox-favoring religious status quo needs to change. In a political culture normally dominated by foreign policy, it is rare to see the triumph of a party so focused on domestic issues.

Yesh Atid’s central plank is drafting Haredim to the army. But party leader Yair Lapid has also committed himself to do “everything in my power” to bring about civil marriage and to enable Reform and Conservative Judaism to receive significant state budgets and perform conversions. 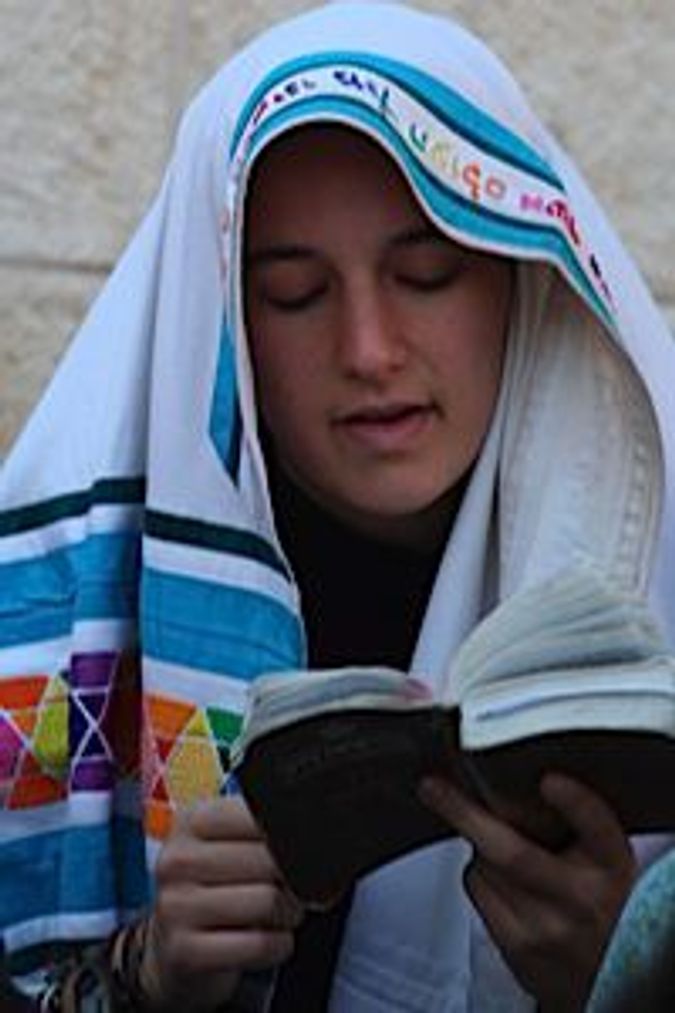 Wall Flower: A woman prays at the Western Wall in Jerusalem. Image by Getty Images

His unexpected success, winning 19 Knesset seats and coming in just second to Prime Minister Benjamin Netanyahu’s Likud-Beiteinu coalition, turned Israeli politics on its head. Usually, the key coalition force that the ruling party needs to arrive at a governing majority consists of Haredi politicians from Shas and United Torah Judaism with their sectarian agenda; this time it is the secular-led Yesh Atid with its liberalizing agenda. Whereas the religious parties have been able to use this power to demand authority for their Orthodox vision of Judaism, Lapid could now present himself as a strong counterweight to their positions.

“I definitely see an opportunity for change, as the balance on issues of religion has changed,”said Mickey Gitzin, a pro-pluralism activist who was deputy director of the election campaign for the left-wing Meretz party. “Yair Lapid has taken away the balancing position of Shas. This buys an opportunity.”

Lapid’s victory was not the only boost for pluralism advocates. Former Kadima leader Tzipi Livni has adopted a strong religious equality emphasis in recent months, and her new party won six seats. The 15-seat Labor Party’s domestic agenda, which includes pluralism, is more prominent than in the past, with the party paying less attention to the peace process. And Meretz, which wants a separation between religion and state, doubled its Knesset representation to six seats.

In the Haredi-run party United Torah Judaism, the sense that change is afoot has overshadowed its election success, which saw it increase its seats to seven from five. “We are worried about everything: Reform buses on Shabbat. We’re in Israel not in New York,” Yerach Tucker, spokesman for UTJ lawmaker Moshe Gafni, commented to the Forward.

It is a matter not just of platforms, but also of personalities. Andrew Sacks, director of the religious affairs bureau of the Israeli Conservative movement, said that he sees many elected Knesset members as “very sympathetic” to his movement and its desire for religious change.

Another source of optimism is the fact that despite its Orthodox ideology, the Religious-Zionist Jewish Home party has shown some openness to a liberalizing agenda on religious affairs. “It’s time to open all the issues of religion and state as a whole, because reality has changed,” party leader Naftali Bennett said in an election night speech. “It’s time to sit down with all parties and groups in dialogue and mutual respect, and we will discuss together creating a new assembly in Israel in the field of religion and state.”

The expiration last summer of the Tal Law, the legislation that exempted Haredi men from national service, ushered in a new atmosphere in Israeli politics, propelling the Haredi draft to the center of the national agenda. The question is whether Lapid will take the view that he should deal with this vote-winning issue and stop there, or continue and focus on other religion-related issues.

Ben-Gurion University political scientist Guy Ben-Porat, who is about to publish a new book on state and religion in Israel, said: “Lapid’s main platform is on religious [national] service. It’s a very easy and popular target, and I don’t think he’ll go beyond that.”

But many activists disagree. “The military draft is just part of the whole picture — to suggest otherwise is like saying that Rosa Parks was struggling for seating arrangements on a particular bus,” Anat Hoffman, executive director of the Reform movement’s lobbying arm, the Israel Religious Action Center, told the Forward.

Hoffman said that she is “positive and optimistic” about the cause of civil marriage. And despite her tense relationship with the Haredi community, she described the Yesh Atid’s Haredi lawmaker, Dov Lipman, as “amazing” and “one very rare ultra-Orthodox rabbi.”

Hoffman chairs the Women of the Wall, a feminist group that challenges the male monopoly on communal prayers at the Western Wall, and was arrested last October for reciting part of the morning liturgy there. She is enthusiastic about Lapid’s promise to facilitate female prayer at the Wall.

This past May, Lapid said that “Israel cannot be the only country in the Western world that has no freedom of religion for Jews.”

In practical terms, liberalizing legislation is a numbers game, and 61 is the magic number for any law to pass. Pro-civil marriage parties control exactly this number of seats, and could potentially force a free vote for those inside the government, even if Netanyahu opposes a marriage bill. It’s also possible that they could win over some members of Likud-Beiteinu and Jewish Home, as well as Arab parties.

When it comes to increasing state funding for Reform and Conservative synagogues and religious movements, Yisrael Beiteinu loses interest. Its support for civil marriage stems from the fact that many members of its core constituency of Russian-speaking immigrants are not halachically Jewish and therefore can’t currently get married in Israel, but they are unconcerned about non-Orthodox Judaism.

Netanyahu’s Likud party, however, is expected to approve the money. “This is going to be the easiest bone for Netanyahu to throw,” predicted Uri Regev, president and CEO of Hiddush, an organization that pushes for pluralism.

Regev reasoned that it will please Lapid and the other pro-pluralism parties but prove relatively uncontroversial because the taboo on funding has already been broken as a result of legal proceedings. In the most recent development, a legal case ended in May 2012, with the government agreeing to recognize some Reform and Conservative rabbis and to fund their salaries.

Advocates for Religious Pluralism in Israel Buoyed by Election Results