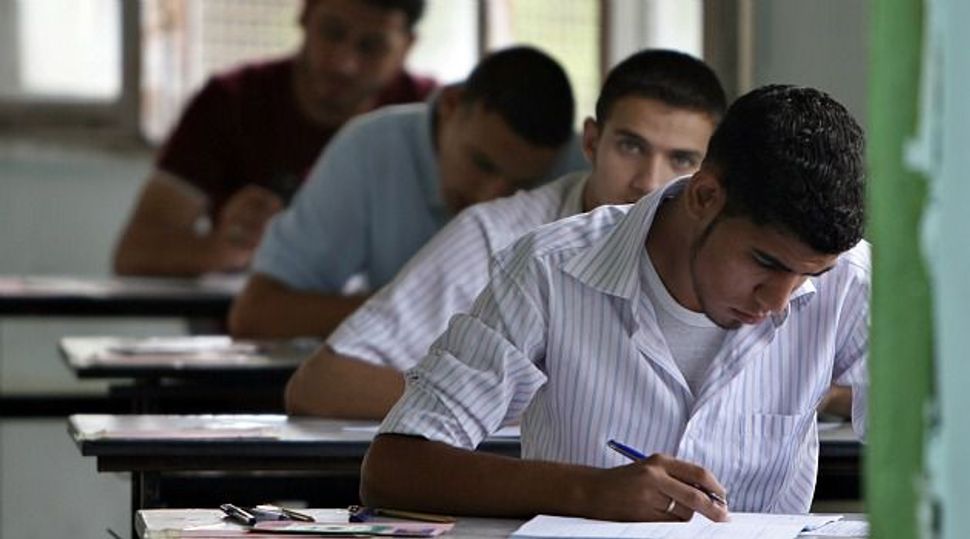 Reading, Writing, but No Demonizing: Do Palestinians learn to dehumanize Israelis from school textbooks? A new State Department-funded study says no ? but accuses both sides of distorting history. Image by Getty Images

A landmark State Department-funded study has cleared the Palestinians of demonizing Jews in school textbooks but contends that both Israeli and Palestinian teachers use classroom materials that distort the history of the Middle East conflict.

The study, described by its authors as the first scientific analysis of incitement in Israeli and Palestinian textbooks, contradicts a longstanding narrative among Israelis, American Jews and others that Palestinians incite their children to violence by depicting Jews as subhuman in their textbooks.

Several years in the making, the study was carried out and overseen by a team of American, Israeli, Palestinian and international education experts. It was commissioned by the Council of Religious Institutions of the Holy Land, a consortium of Muslim, Jewish, and Christian leaders in Israel, and received $590,000 in funding from the U.S. State Department.

Its findings were released at a press conference in Jerusalem this morning.

The Israeli government said it refused to cooperate with the study and has denounced the findings as “predetermined,” without elaborating. “The attempt to create a parallel between the Israeli education system and the Palestinian education system is completely unfounded and lacks any basis in reality,” the Israeli Ministry of Education said in a press release.

The study’s lead investigators defended their report, saying in a statement that an international team of schoolbook analysts confirmed that the study is “of the highest scientific standards.”

An official at the Palestinian Ministry of Education did not respond to a request for comment by press time.

The study’s first, and perhaps most surprising, finding is that, for the most part, neither Palestinian nor Israeli schoolbooks demonize the other people or refer to them as subhuman.

The question of Palestinian textbooks’ portrayal of Jews has been bitterly debated for years. More than a decade ago, the European Union considered halting aid to the Palestinian Authority based on its negative portrayals of Israelis in its textbooks.

As recently as last year, the Washington Jewish Week reported on a dispute over whether Palestinian textbooks call Israelis pigs and snakes. Over the past decade, the Israeli government, the State Department and independent groups have produced wildly varying reports on the contents of Palestinian textbooks.

The new study examined 94 books from Palestinian school systems in Gaza and the West Bank, and 74 books from the Israeli secular and religious school systems. There were just 20 instances of “extreme negative characterizations” of Palestinians in Israeli secular books and seven in Israeli ultra-Orthodox books, according to the study. One such example in an ultra-Orthodox book referred to a decimated Arab village, now the site of an Israeli settlement, as “a nest of murderers.”

Palestinian books had just six instances of these “extreme negative characterizations.” For instance, one book referred to an Israeli interrogation room as a “slaughterhouse.”

These characterizations, however, were extremely rare and statistically insignificant.

“I think it’s nice that (so few) have those extreme statements,” said Bruce Wexler, the Yale University psychiatry professor who designed the study. He said that previous accounts of Palestinian incitement in textbooks were likely based on a small number of highly political books, or on books no longer in use, those that were circulated under the Israeli occupation authority by the Egyptian and Jordanian governments before the Palestinians were given control of their own education system in 1994. (The Palestinians have written their own textbooks since 2000.)

“It is possible that some people have attempted to selectively portray the books as worse than they are,” he added.

A second finding is that both Israeli and Palestinian textbooks portrayed the other as the enemy while presenting their own countries in almost exclusively positive terms.

One ultra-Orthodox book referred to Israel as a “little lamb in a sea of seventy wolves.” Another secular Israeli book stated, “Since its establishment, the State of Israel sought to make peace with its neighbors, the Arab countries, through Israeli-Arab negotiations” but failed because of Arab refusal to recognize Israel’s right to exist.

Palestinian books often described the Zionist movement and Israel’s founding as the source of Palestinian problems. The “Zionist occupation and its usurpation of Palestine and its people’s rights comprise the core of the conflict in the Middle East,” read one textbook. Another said that “Britain sought the Jews’ help to achieve their imperialist aspirations, and so the Jews began migrating to Palestine.”

Some Israeli secular books also feature reflection on Israeli wrongs. One detailed Israeli outrage over the killings of Palestinians at the Sabra and Shatila refugee camps in Beirut in 1982. “The Israeli self criticism is quite impressive,” said Wexler. But for the most part, the study notes, “Historical events, while not false or fabricated, are selectively represented to reinforce each community’s national narrative.”

A third finding is that there is a lack of information about the other in each sides’ books. Fourth is that the negative depictions and omissions of the other are most pronounced in Israeli religious ultra-Orthodox books and Palestinian books. Israeli secular books are the most self-critical of the three categories.

The researchers also examined maps in the schoolbooks, and found that in 58 percent of the post-1967 maps in Palestinian schoolbooks, the polity “Palestine” is shown, with its area incorporating everything between the Jordan River and the Mediterranean Sea, including present-day Israel. There is no mention of Israel.

Conversely, 76 percent of the post-1967 maps in Israeli schoolbooks show Israel as the area between the river and the sea, with no mention of the Palestinian Authority, or notation of the so-called Green Line that separates Israel from the West Bank and Gaza territories it conquered in the 1967 Six Day War.

“This type of education can create a lasting obstacle to peace,” said Wexler. “If you grow up seeing maps that seem to imply that the territory between the Jordan River and the Mediterranean Sea is your homeland… and you are asked to give up some of that land to make two states, you would feel you are losing something that you never had to begin with.”

In order to analyze the books, the researchers isolated 3,000 units of data found within — poems, stories, photographs and illustrations. The researchers then looked at how the unit dealt with certain topics, and to what degree.

The study urges both school systems to assess their textbooks in light of the findings, and to consider, as a first step, adding more information about the other side in order to humanize it.