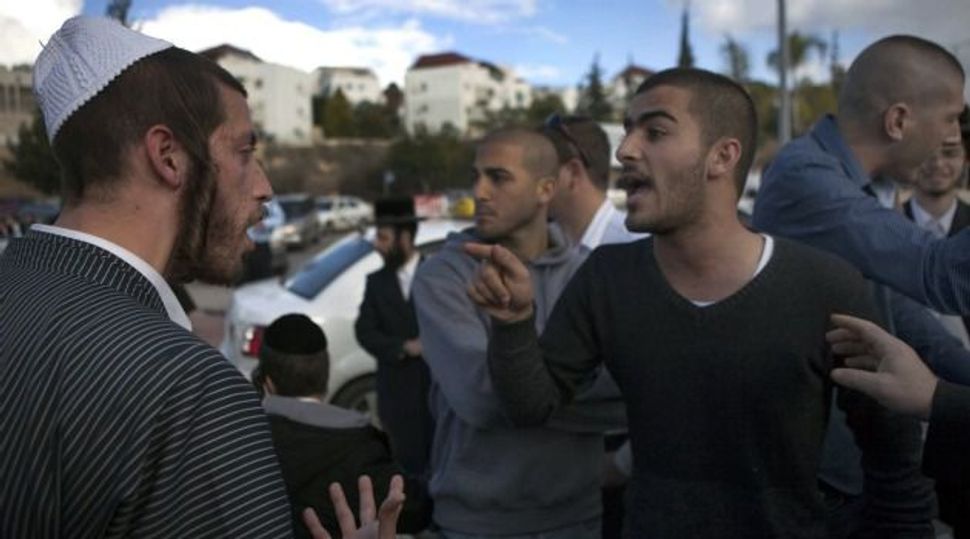 Stepping Back: The Israeli town of Beit Shemesh nearly exploded after ultra-Orthodox men taunted schoolgirls for not dressing ?modestly? enough. A year later, calm has returned as the town has taken a step back from conflict.

Next to the Modern Orthodox Orot Banot girls school in Beit Shemesh, fresh mounds of dirt and a huge hole in the ground indicate the spot where a community center is being built.

Orot Banot was at the center of conflict between local haredi Orthodox extremists and Modern Orthodox residents in late 2011, after a group of haredi men spit upon an 8-year-old girl, Naama Margolese, as she walked to school through their neighborhood. The incident marked a high point of internecine conflict in this city of 80,000 near Jerusalem and made headlines around the world.

“The reputation that Beit Shemesh got bothered everyone,” said Ilan Geal-Dor, executive director of Gesher, a nonprofit group that fosters secular-religious dialogue. “We’re all going to live here, so let’s see what we can do together,” he said.

A year ago, Beit Shemesh represented a stormy microcosm of the increasingly tense relationship between Israel’s haredi Orthodox community and the state’s Modern Orthodox and secular residents. But 14 months after the city became an international symbol of Israel’s internal strife, Beit Shemesh has retreated from the brink. Though underlying tensions remain, a tenuous calm that has taken hold.

Orot Banot has operated without incident for a year. Construction on the community center, meant to serve the whole city, continues unabated. A host of programs have been launched to help foster mutual respect and coexistence between the city’s various communities.

A roundtable of community leaders, from haredi to secular, now meets every six weeks to try to head off future conflicts and collaborate on issues of shared concern. Several times a month, secular, Modern Orthodox and haredi young men gather to study Torah and celebrate Shabbat together. A mixed group of 16 women has spent a year creating documentary films about Jewish women’s issues. And a larger women’s council spent 2012 encouraging dialogue between Beit Shemesh’s various groups.

“What creates tension is that nobody knows the other,” said Shmuel Pappenheim, a haredi participant in the community roundtable. “When you sit at a table and say what you think, you understand what motivates the other.”

Last year, haredi leaders dissuaded their followers from tearing up Israeli flags on Israel’s Independence Day – previously an annual practice. And the group has collaborated on efforts that benefit all city residents, like pushing for renovations on the city’s main road.

The young men’s study group, run by the nonprofit organization Be a Mensch, aims to replicate the roundtable’s formula at the grassroots. Modern Orthodox, haredi and secular boys gather on Friday and Saturday nights to sing, dance, study Torah and pray. Boys also meet during the week for discussions on interreligious issues and have held large communal events during the High Holidays and Sukkot. Plans are in the works to create a similar girls’ group.

“We felt like we had the same common values,” said Yehuda Schain, the group’s haredi leader. “The people who are coming to the meetings are already open to understanding. People come out and say, ‘We want to meet again.’”

Wonderful Women, the film group, is trying to defuse conflict by producing documentaries. So far, the group has produced three films touching on the underlying divides between the group’s participants: one about a reunion between secular and haredi childhood friends, another on differing views of women’s prayer, and a third about two grandmothers, one a kibbutznik and the other a chasid.

“It allows people to create and meet, not just talk,” said Hila Timor Ashur, Wonderful Women’s founder. “I wanted people to really get to know each other. We’re all women, we all have the same kitchens. Our kids have the same problems.”

For the Beit Shemesh women’s council, which has existed for almost five years, the central challenge of the conflagration in 2011 was preventing ongoing conflict within the group. After months of lingering tension, the women brought in mediators last year for three months of weekly meetings.

Brenda Ganot, a Modern Orthodox council member, said that while the sessions were generally conducted in a spirit of mutual respect, they are unlikely to solve much.

“People are still afraid,” Ganot said. “The greatest fear is that the city will become a haredi city. There’s not a day I don’t wake up and say, ‘Why am I still in Beit Shemesh?’”

Ganot’s fears point to deep divisions that persist in the city, despite the reconciliation efforts. Secular and Modern Orthodox residents, like Ganot, blame the conflict on extremists within a growing haredi community that now makes up 45 percent of city residents.

“You can’t blame the haredim, but their rabbis don’t stop it,” said Dick Fisch, 73, a South African immigrant who has lived in Beit Shemesh for 11 years. “They have to tell them, ‘You don’t behave like this.’ These are gangsters. After this last confrontation, they understand that if you break the law, you suffer consequences.”

For their part, haredi leaders say the extremists are a tiny minority, comprising a few hundred people at most, and that the blame lies with Israeli media for polarizing the conflict and blowing it out of proportion.

“During the struggle, the whole haredi population supported the haredi side, and vice versa,” said Pappenheim. “Ninety or 99 percent of haredim wouldn’t have accepted the spitting, the demonstrations. But when the press was against the haredim, we came together.”

Many activists fear that, with municipal elections scheduled for October, the simmering tensions in Beit Shemesh easily could be triggered anew. A haredi candidate, Moshe Abutbul, won the last mayoral race in 2008, and his critics – roundtable participants among them – note that he has presided over an expansion of haredi housing in the city.

Abutbul counters that he has worked to calm tensions, supporting the roundtable and building entertainment venues for the city’s secular residents.

“Elections and tension go together,” Abutbul told JTA. He said he isn’t worried about an escalation.

Pappenheim is less certain. Residents “are still licking their wounds” from 2011, and that the next round may not be far away, he said.

“Now it’s on a low burner,” he added. “It can flare up with the next elections. When the fire breaks out, the rules change.”