Chuck Hagel, Confirmation Battle Over, Gets Down To Business With Israel 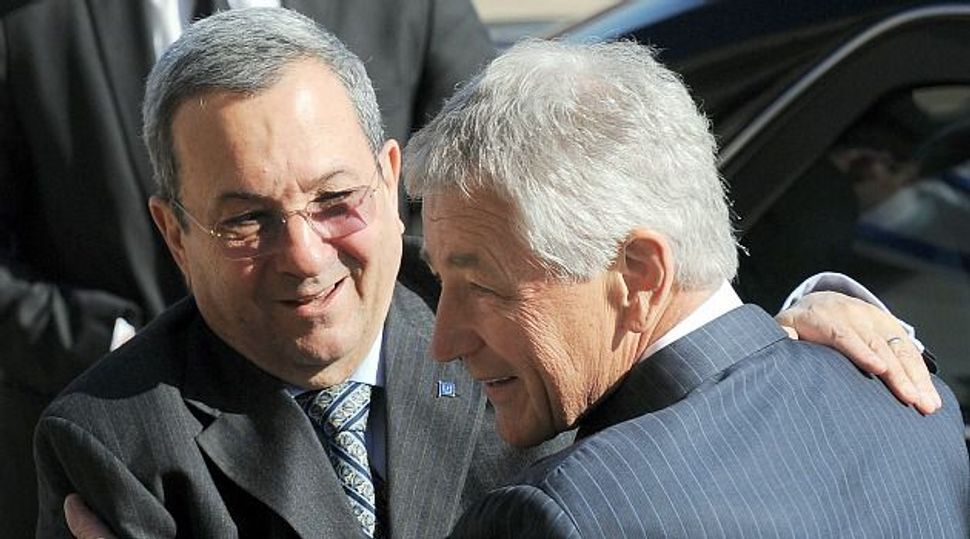 The heated debate over Chuck Hagel’s nomination as secretary of defense may have left a bitter aftertaste for those following the exchange.

But for Washington insiders, the accusations, retorts and congressional battles, are nothing more than politics. With Hagel now at the Pentagon’s helm, political disputes are being set aside in favor of getting back to business.

“Everything that happened in recent months means nothing now,” said Lawrence Korb, who was an assistant secretary of defense in the Reagan administration. “Chuck Hagel is not the kind of guy who will try to get back at people.”

Korb, currently a senior fellow at the Center for American Progress, added that Hagel could easily seek retribution against lawmakers who opposed his nomination by cutting military programs in their states, but he did not indicate he’d take any such action.

Current and former government officials largely dismissed concerns that the barbs hurled against Hagel from some quarters of the Jewish community would mean a loss of access to the Pentagon by Israel advocates now. Some pointed to the fact that Hagel invited Ehud Barak, Israel’s minister of defense, to be the first foreign counterpart he would meet with at the Pentagon. For his part, Barak, in a March 3 speech at the American Israel Public Affairs Committee’s annual policy conference, sent greetings to Hagel from the podium. “As Secretary of Defense he will no doubt serve his country with the same pride and honor with which he served both on the battlefield and in Congress,” Barak said.

Ties between pro-Israel lobbying groups — in particular AIPAC — and the Pentagon run long and deep. Steve Rosen, a former top AIPAC official, estimated that “nearly half of the traffic between Israel and the United States goes through the Pentagon.”

This traffic includes military cooperation, procurement, and intelligence sharing. The pro-Israel lobby deals only with a small portion of it, mainly with issues related to arms sales and military assistance requiring Congressional legislation.

AIPAC does not deal with issues pertaining to classified information on military cooperation. These issues are discussed by Israeli and American military personnel. Arms sales contracts are dealt with by local lawyers hired by Israel. The Pentagon also influences most of the issues relating to American foreign aid to Israel since this aid is in the form of military assistance and is used to purchase American arm systems.

In the run up to Hagel’s confirmation, several Jewish and pro-Israel groups and activists were at the forefront of the attacks against his nomination as defense secretary. They pointed to his views on Iran and on Israel as reasons for denying Obama his first choice. Some, such as Anti-Defamation League national director Abraham Foxman, suggested Hagel had come close to anti-Semitism when he cited “the Jewish lobby” as a source of intimidation in Washington during an interview. A few, such as former Reagan administration official Eliot Abrams called Hagel an anti-Semite outright.

But AIPAC notably remained on the sidelines of the discussion, despite the fact that much of it focused on remarks Hagel had made about AIPAC’s own influence over elected officials.

“I think Hagel understands that most of the criticism, which turned out to be fictional, came, frankly, from the extreme right in the Jewish community,” said Dov Zakheim, former undersecretary of Defense during the Bush administration. According to Zakheim, AIPAC might have even gained some points by refusing to attack Hagel, particularly since AIPAC itself came under fire for staying on the sidelines by critics of the nomination. “It was criticism coming from the fringe and Hagel will pay no attention to it,” Zakehim said.

Lost in the fierce debate over Hagel’s views on Israel was the fact that AIPAC had maintained a working relationship with him during his two terms in the U.S. Senate and in his many years of public service. As an influential Senator on foreign policy issues, the pro-Israel lobby kept in touch with Hagel through AIPAC lobbyists in Washington and through activists, known as “key contacts” from his home state of Nebraska. “It wasn’t a love relationship, but there was also not much enmity,” said Rosen.

Representatives of the Israeli embassy in Washington also kept in touch with Hagel while he was in the Senate and, more recently, as his name emerged on President Obama’s shortlist for defense secretary. “This is a position with huge importance for us,” said an Israeli diplomat, “naturally we wish to be in good ties with him.”

The pro-Israel lobby’s daily interaction with the Pentagon is usually conducted on working levels. Few issues rarely rise to the defense secretary’s level. The last major disagreement was over former president George W. Bush’s refusal to sell Israel heavy bunker-buster bombs, fearing Israel might use the ammunition to attack Iran. Recent years have seen little friction between the Israeli and American defense establishments.

Even limiting arms sales to Arab nations, a cause that pro-Israel advocates spent much of their energy on two decades ago, has subsided in recent years. Israel and its supporters in the United States now view arms deals with Gulf countries as a counterweight to Iran’s growing influence in the region.

While AIPAC does the heavy lifting on specific legislative issues and on details of arms sales, most major Jewish groups try to maintain a close relationship with top Pentagon officials, usually discussing the broader issues of Israel’s defense challenges in the region. “I remember once,” Zakheim recalled, “the secretary of the Air Force told me he just met with a Jewish organization but could not remember which initials they were.”

Chuck Hagel, Confirmation Battle Over, Gets Down To Business With Israel