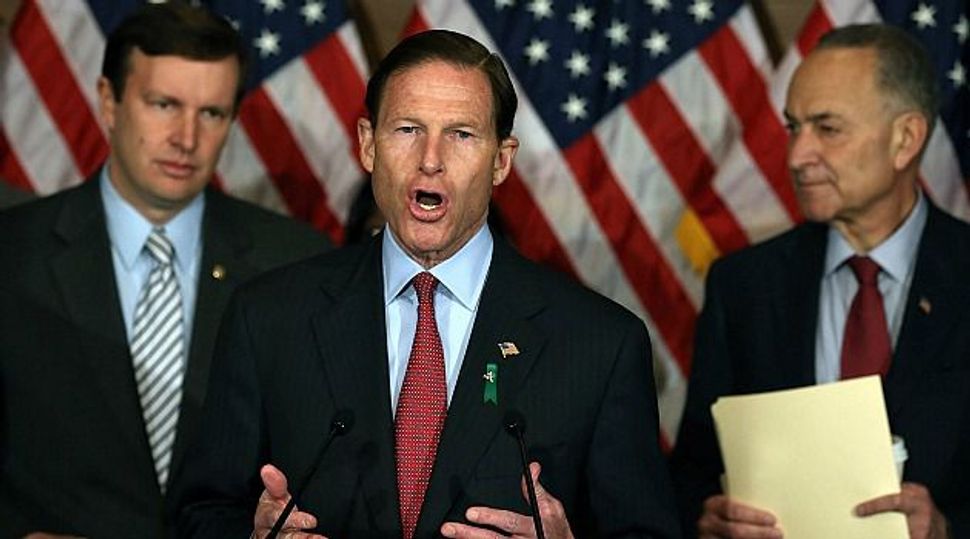 Not Giving Up: Richard Blumenthal (D-Conn.) and Chuck Schumer (D-N.Y.) are among the Jewish lawmakers leading the gun control fight. Image by getty images

Jewish advocates for gun control are vowing to turn up their grassroots pressure on certain senators to change their minds, or work hard to see them turned out of office following the Senate’s rejection of an amendment that would have expanded background checks for gun buyers.

Left with precious few options, supporters of gun control, both Jewish and non-Jewish, believe they can ultimately revive the measure, which died in the Senate on April 17, by harnessing the voices of the 90% of Americans who, according to public opinion polls, backed the failed legislation.

But either way, a second round in the battle for greater regulation of guns appears to be off the table in the short-term after the powerful gun lobby successfully dissuaded senators who were up for re-election from supporting the bill.

Jewish members of Congress have taken a leading role in fighting for greater regulation of gun sales and possession following the Sandy Hook Elementary School killings in Newtown, Conn. last October that left 20 children and seven adults dead. And that prominence continued in the immediate aftermath of the measure’s failure to get 60 of 100 Senate votes, as has become necessary in recent years under Senate procedures for moving legislation forward.

Connecticut Democrat Richard Blumenthal, in whose state the killings took place, stood before reporters on Capitol Hill shortly after only 54 senators voted to block a filibuster of the measure, flanked by families whose children had been killed at Sandy Hook, and declared the legislation’s demise “probably the saddest day of my public life.”

The legislative amendment backed by Blumenthal and the Senate’s 10 other Jewish lawmakers would have closed large loopholes that allow gun buyers under current law to avoid background checks that block sales to convicted felons or individuals with a history of mental illness. Those who buy from established gun shops must currently undergo such checks. But buyers at traveling gun shows or in private transactions — some 40% of all gun sales — do not.

Despite the measure’s defeat, Blumenthal told the Forward that “the gun lobby is in no way invincible.” Before the December shooting in Newtown, he argued, gun control “was considered an untouchable topic.” No less importantly, he said, there is no alternative to battling on. “At the end of the day, better laws are needed,” he said.

Gabrielle Giffords, the Jewish former Congress member from Arizona who was seriously wounded in a 2011 assassination attempt while meeting constituents in her district, also signaled she was not giving up. Giffords stood with other victims of gun violence at President Obama’s side when he issued his angry response to the Senate vote from the Rose Garden. “All in all, this is a pretty shameful day in Washington,” said a visibly furious Obama.

Nevertheless, a sense of defeat hung over many Jewish lawmakers and advocates who have taken on gun control as a central legislative cause since the Connecticut massacre. Senators Chuck Schumer of New York and Dianne Feinstein from California led the legislation; New Jersey’s ailing Frank Lautenberg was brought to the Senate floor on a wheelchair to cast his vote in favor of the amendment. New York Mayor Michael Bloomberg poured millions into TV ads attacking Republican and Democratic Senators who opposed the amendment. And several Jewish groups, most notably the Union for Reform Judaism, pitched in by lobbying and mobilizing congregants and supporters.

On the day following the Senate defeat, Vice President Joe Biden sought to re-energize the pro-gun control base. In an off-record conference call with activists, including some from Jewish organizations, Biden reminded participants that the 1983 Brady bill, the last major gun control legislation, also failed in the Senate four times before passing. He rallied activists to try again.

The stymied amendment, which is part of a broader gun violence prevention bill, was put on freeze and can be reintroduced by the Senate majority leader if and when he sees a chance to get the bill approved.

To reach that point, gun control supporters are now turning inward, reaching out to constituencies considered supportive of background checks that have yet to get involved in the political battle. They believe, said activists from within the campaign, that many proponents of closing background check loopholes remained on the sidelines because they viewed the amendment, which was a result of a bipartisan agreement, as one that would surely pass Congress. Now that the measure has failed, activists hope to see more voters speaking out and pressuring senators who voted against background checks to reconsider their stand.

“There is a very, very clear feeling from the President down that this effort is going to continue,” said Hadar Susskind, director of Bend the Arc Jewish Action, a liberal Jewish advocacy group engaged in the gun control debate.

“Organizations,” Susskind said, “will now bring more people and invest more energy. Many who have not done much are now saying they will call their senators.”

But Jewish political power is concentrated mainly among Democrats and liberals, while the senators who voted against the amendment are mostly Republicans and representatives of Southern states. Rachel Laser, deputy director of the Religious Action Center of Reform Judaism, argued this should not be a barrier for Jewish gun control supporters. “Even when the community is small, it has a relationship with its representatives,” she said.

As an example, Laser noted that Reform Jews in Anchorage, Alaska were now working hard to convince Senator Mark Begich, one of four Democrats who voted against the amendment, to change his mind.

Other Jewish activists are focusing on making those who defeated the legislation pay a price — by being replaced. Bloomberg’s group, Mayors Against Illegal Guns, vowed to take the fight to the 2014 election cycle, when some of the senators who voted against the bill, and who are seen as vulnerable, will be up for re-election. Prime among these are Democrats Begich, Max Baucus of Montana and Mark Pryor of Arkansas. Baucus announced on April 23 that he will retire and not run for another term.

Bloomberg said in a statement that his group “will work to make sure that voters don’t forget.” Giffords voiced a similar sentiment, tweeting after the vote that “If Congress won’t change laws to reduce gun violence, then we need to change members of Congress.”

Bloomberg and Giffords bring genuine firepower to the battle in terms of deep pockets and public sympathy, respectively. But they will still face a powerful gun lobby that has cultivated longstanding relations with lawmakers from conservative leaning states and has proved its political savvy in defeating even the slightest changes to gun-related legislation.

In the month prior to the Senate vote, Bloomberg footed the bill for a $12 million ad campaign, which ran in 13 states and was aimed at pressuring lawmakers to support expanded background checks. He will no doubt spend generously in the 2014 elections. But in the previous 2012 campaign cycle, the National Rifle Association, which is just the largest of several gun rights groups, spent $18.6 million, according to the Sunlight Foundation, which tracks money in political races.

The prospects for shorter-term, non-legislative alternatives, meanwhile, seem bleak. President Obama could sign executive orders that would close some loopholes allowing gun purchases without background checks. But in his first term Obama proved reluctant to use executive orders in this way. He is unlikely to try to bypass Congress on issues the Senate has explicitly voted down.

Another option gun control groups are considering is advocating for state-level legislation. Maryland recently passed tough measures banning the sales of assault weapons and high capacity bullet magazines, and requiring extensive background checks. Strict limitations on gun purchases have also passed in Colorado, notably a Western “purple” state whose political leanings are up for grabs. Similar measures, however, are not likely to be adopted in a majority of states.

Another possible long term move being discussed is changing the Senate rules to eliminate filibusters, which make it easy for the minority party to require a 60-vote majority on all legislation and nominations. The gun control debate, said Senator Blumenthal, could “provide the impetus and support to efforts to eliminate filibusters.” But such a change in procedural rules is viewed as politically unattainable now and not likely to be brought to debate until after the 2014 elections.