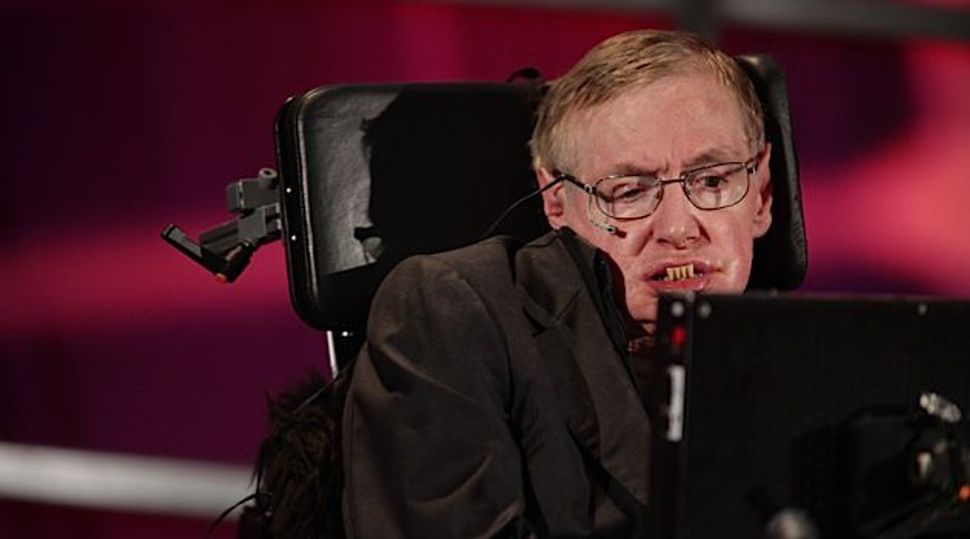 In the battle between supporters of Israel and those calling for a boycott of the Jewish state success is measured to a great extent by symbolic victories. And nothing makes for more of a symbolic victory than getting the most prominent living scientist to boycott Israel’s most prestigious gathering.

Such was the impact of British physicist Stephen Hawking’s surprise withdrawal from Israel’s Presidential Conference at the request of pro-Palestinian activists.

For supporters of the BDS movement, who call for boycott, divestment and sanctions on Israel, Hawking’s decision was cause for unprecedented celebration. Not only is Hawking a world-leading scientist who succeeded in making theoretical physics and cosmology accessible to laymen, he also demonstrated, in his struggle with a debilitating nervous system disease, the strength of mind over body. The event Hawking chose to boycott — an international gathering celebrating the 90th birthday of Israel’s most well-known leader, Shimon Peres — added to the BDS movement’s triumph.

“This is a fantastic move, a sort of watershed moment,” BDS activist Sami Hermez said in a May 10 interview on Al Jazeera TV. “When someone like that boycotts Israel, you have the possibility of a snowball effect and it speaks to the growing nature of the BDS movement.”

Supporters of Israel did not dispute the significance of Hawking joining the BDS camp, but they did question the significance of the move for future attempts to boycott Israel. Oren Segal, director of the Anti-Defamation League’s Center on Extremism, called the decision “a PR gift to the movement,” but noted at the same time that putting Hawking’s move in perspective would require acknowledging that “for every high-profile person who acquiesces to those demanding a boycott, there are dozens of others who do not succumb to this pressure.”

Reaction in Israel and around the world to Hawking’s move helped enforce the notion that Hawking was more than another name on the list of celebrities refusing to visit Israel. The chairman of the Presidential Conference, Israel Maimon, responded angrily, calling the decision “outrageous and improper.” Maimon added that the imposition of such a boycott is “incompatible with open, democratic dialogue.” The British press, which covered the Hawking affair closely, devoted lengthy articles to the decision, voicing opinions both favoring the boycott and opposing it. In the American media, usually known to lean more in favor of Israel than the European press does, the mainstream Boston Globe stood out by publishing an editorial that labeled the Israeli response an “overreaction” and called Hawking’s move a “reasonable way to express one’s political views.”

Hawking announced his decision on May 9, after it was initially reported a day earlier in the British newspaper The Guardian. In a letter to organizers, Hawking explained that he made the decision following appeals from Palestinian academics to withdraw. “Had I attended,” he wrote in the letter, “I would have stated my opinion that the policy of the present Israeli government is likely to lead to disaster.”

The BDS movement began to organize in 2005, modeled after the global movement to boycott South Africa during the Apartheid regime.

The extent of the BDS movement’s success has been in dispute. Efforts to enroll major companies, stockholders and unions in pulling their investments from Israel or from firms doing business with Israel failed to gain traction, and there has been little success in limiting the sale of Israeli products, especially in the United States.

The movement did succeed, however, in convincing some high-profile artists, including Roger Waters, Elvis Costello and Snoop Dogg, to drop Israel from their concert tour schedules. Other performing artists decided in past years to cancel planned shows in Israel without providing any explanation or tying their decision openly to the Israeli– Palestinian conflict.

Academic circles have not been immune to boycott attempts, though practical moves to withdraw from conferences in Israel or reject Israeli researchers were rare and occurred mostly in Europe. Hawking’s move could change that balance, adding celebrity power to the academic and scientific boycott in a way that could make intellectual interactions between Israelis and their colleagues around the world more difficult in years to come.

Itamar Rabinovich, former president of Tel Aviv University, called the academic boycott movement “an incremental process” that has been “gathering volume.” He noted that Hawking’s withdrawal and the attention it drew should be seen as “jumping to a new level” in the attempts to isolate Israeli academic work. “It resonates and it is being used by those who believe in it to give the movement more m omentum,” said Rabinovich, who also served in the past as Israel’s ambassador to Washington.

Rabinovich characterized Hawking’s decision as only a boost to the BDS movement, not a game changer. The impact of anti-Israeli sentiments in the academic world is already noticeable, he said, and could increase in the future. In humanities and social studies, he said, “if you want to get invited to an important conference or to spend a sabbatical in a leading university, you better be politically correct on issues relating to Israel, or else you won’t have a chance.”

In the scientific field, Rabinovich said, such pressure is not yet noticed but could emerge in coming years, making it more difficult for Israeli scientists to receive research grants or to find colleagues who will work together on projects supported by binational funds.

Activists monitoring the BDS movement, such as Segal, were puzzled by the route Hawking took to express his criticism of Israel. Refusing to take part in activities relating directly to Israel’s occupation of the West Bank is more common in academic circles, he said, as is the boycott of goods from settlements, or refusing to visit individuals involved in Jewish life in the occupied territories. Hawking’s move was more extreme, Segal said, especially for a scientist who has not been vocal on these issues before.

“His decision was a kind of denial of Israel’s existence,” Segal said of the withdrawal from the Presidential Conference. “That’s what makes it all the more disturbing.”