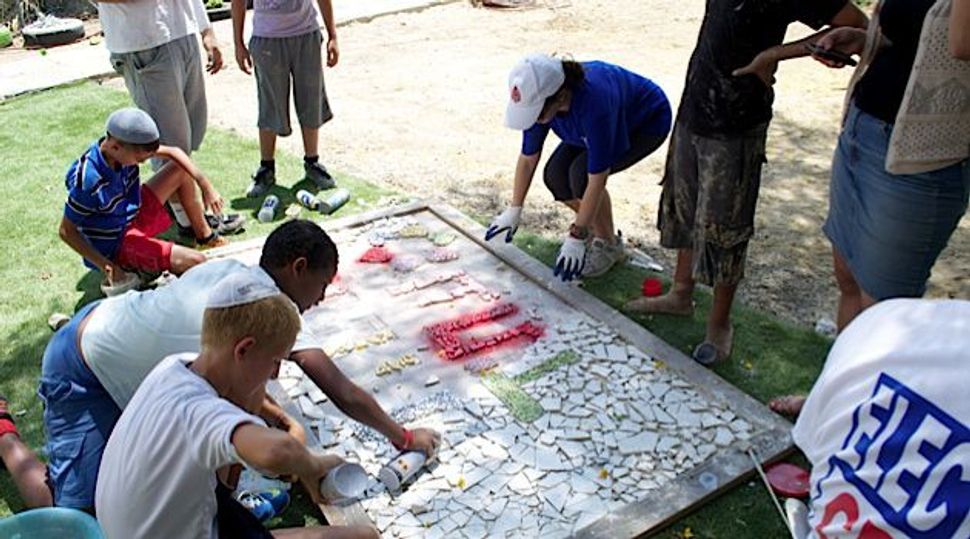 Most students on 10-day guided tours to Israel come to climb Massada, snorkel and visit iconic tourist stops. Ava Skolnik, on the other hand, spent her days sowing gardens and digging mud ovens for a town in Southern Israel.

Skolnik, a student at Drexel University, and 15 other students from Philadelphia, were participants of “Philly Hillel in Netivot 2013”, a trip last month which enabled young American Jews to get to know the residents of the development town, Netivot, by working side-by-side with its residents on local projects aimed at improving their quality of life. Netivot and the Jewish community of Philadelphia have a special relationship as twin cities.

During the first few days of the trip, the students sowed a garden by the building that houses Potchim Atid, a club for 8-10-year old potentially at-risk children, as well as a mud oven for baking activities. Although the children knew no English, and few of the Philadelphia students knew much Hebrew, the children were eager to work together with them. “We ended up singing a lot together,” Skolnik said. “Amazingly, they knew all the words to Carly Rae Jepsen’s ‘Call Me Maybe’!”

For the last few days of the trip, the Philly volunteers were helping local Ethiopian teens build their own garden next to Club 51, a center that provides Ethiopian and Mizrahi youth with afterschool informal education and leadership opportunities.

“It was hard because we were working on a deserted lot,” Skolnik said. “But still, we managed to turn over the soil and build a drip irrigation system. Most importantly, though, was getting the Ethiopian teens to realize that they can continue taking care of it after we’re gone.”

There were other volunteers helping out, too. Some were soldiers doing their tours of civil service, and others were young educated Israeli activist singles and families who had moved to Netivot in order to help the local young residents develop and improve their city.

“In all of our projects, we try to engage as many local Israeli grass-roots organizations as possible,” explained Rachel Olstein Kaplan, associate director of Yahel. “Instead of us Americans coming in and telling them what they need, we ask the Israelis how we can help, and then do what we can.”

Yahel’s main goal, according to its website, is to “deepen the connection between Israeli and Diaspora Jews through a common desire to work toward a more just world”.

In other words, bringing the American students to Netivot wasn’t just a matter of building gardens and mud ovens, but more importantly — relationships, said Kelilah Miller, the group leader of the Philadelphia volunteers. “In many ways, Netivot is disconnected from Israel’s central cities. Members of the community told us again and again how their children are leaving for Jerusalem and Tel Aviv, because there isn’t enough of a cultural life or employment opportunities there. In many ways, the residents of Netivot feel forgotten by the world and by the ‘center’ of Israel.

“They couldn’t believe that a group of American students had actually chosen to spend a full week in their community, in order to invest time and energy into helping it thrive,” Miller added.

Although the goal of the trip was to encourage the children, teens and their families to consider the new gardens their own, many were shy about participating, at first. “Days went by while we tried to draw out the more reticent members of the community,” Miller said. “Slowly, more and more of the neighbors began coming down to watch us work. Then they started bringing snacks for us. Finally, they were digging in the dirt, picking out plants and raking the soil.”

By the end of the week, the Americans and local residents were sharing watermelon in the shade and playing pool on a taped-together pool table. “We also learned how to ask, often in very broken Hebrew, to use their bathrooms,” Miller said.

Probably the strongest connections made between the students and the community were through the home-stays. Students were housed with local families for the entire week, including Shabbat.

“At first, I was a little nervous,” Skolnik admitted. “Last summer I came to Israel with Birthright and ended up spending a month in Israel, but that was in a hotel, visiting touristy areas. I didn’t know what to expect living with a host family.”

By the end, she found the experience very gratifying. “It was really eye-opening to spend 10 days with one community, and eating meals with a host family. And even though I don’t speak much Hebrew, I was able to play with the kids because their Hebrew was easy enough for me to understand.”

The trip was also educational, for a different reason. “I never thought I’d learn so much about drip irrigation!” she said.

This article originally appeared in Yiddish in the Forverts.