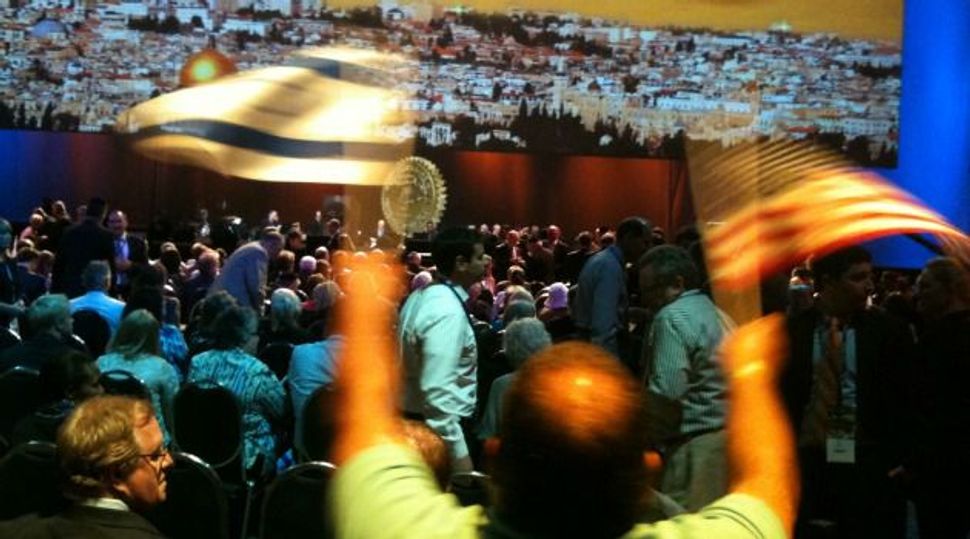 Christian evangelical supporters of Israel sent a strong message of opposition to President Obama on Iran and the renewal of Mideast peace talks as they convened last night for their annual Washington conference.

A series of speakers who took the stage at the conference, which hosted 4,200 members of Christians United for Israel from across the nation, stressed Israel’s right to defend itself against Iran by taking military action and spoke out against attempts to force Israel to accept a peace plan based on the 1967 borders.

For the administration, now fully engaged in Secretary of State John Kerry’s recent success in getting Israelis and Palestinians back to the negotiating table, the conference of Israel’s Christian supporters served as a sobering reminder that U.S. efforts on this issue are not shared by all.

“Mr. Kerry, restarting the peace process with the Palestinians is fiddling while Rome is burning,” Rev. John Hagee, CUFI’s founder and president cried out to the cheers of an excited audience expressing its support with lengthy applauds and the blowing of the shofar. “How can you make peace with someone who wants you to unilaterally accept defeat by accepting the 67 borders?” Hagee added.

The fiery pastor spoke strongly about the need to allow Israel to take military action if needed. “The next time we should turn the IDF loose and have a total victory in the Middle East for peace that will last,” Hagee said in his address.

“Our government is on the wrong side and we are entering terrible, terrible days if we don’t wake up and turn around,” warned TV pundit Glenn Beck who delivered the keynote address at the conference.

Beck, who presented the audience with a variety of props including a whip made by Nazi guards in Auschwitz and a letter from British prime minister Neville Chamberlin to the Hitler Youth, delivered a sermon-like speech about good and evil in the world. “Hitler thought this to the Middle East,” Beck said.

Israel’s ambassador to the United Nations Ron Prosor who spoke at the conference’s main event, the Night to Honor Israel, argued that Palestinians have refused to recognize Israel as a Jewish state and therefore their call for two states is no more than a “euphemism for the destruction of the state of Israel.” Prosor insisted that peace with the Palestinians could only be reached once they recognize Israel as a Jewish state and change their anti-Israel curriculum at schools.

The conference hosted a lineup of critics of the administration’s Middle East policy, including Texas Senator Ted Cruz who argued that the United States should take action against Iran if it gets close to reaching a nuclear weapon, congresswoman Michele Bachmann, Senator Lindsey Graham, and House Majority Leader Eric Cantor. Graham told the audience he plans to present a bill to the Senate authorizing the use of military action against Iran’s nuclear plan.

In a passionate speech to the assembled Christian audience, Malcolm Hoenlein, executive vice president of the Conference of Presidents of Major American Jewish Organizations, added that the “cost of action,” when it comes to Iran, “may be great, but the cost of inaction may be much greater.”

Hoenlein, who was honored with CUFI’s annual Defender of Israel award, called the support Israel receives from Christians in the United States “our nuclear weapon.” Earlier, at a smaller session, Hoenlein joked that “the Jewish lobby is a myth – our job is to make it a legend.”

Rev. Hagee, summarizing the atmosphere at the three-day conference, concluded that Jews in Israel and their Christian supporters in the United States are a “match made in heaven.”