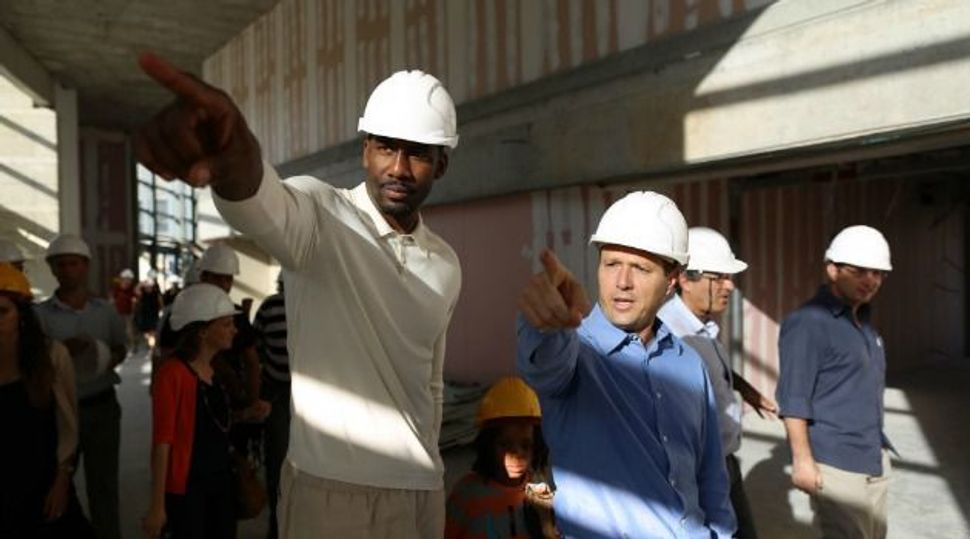 Here in Hebrew: Amare Stoudemire gets tour from Jerusalem Mayor Birkat during Maccabiah Games visit to Israel. Image by jta

(JTA) — The two Israeli television cameramen awaiting the Canadian basketball team’s arrival at the opening ceremony of the Maccabiah Games didn’t hint at the chaos about to envelop Amar’e Stoudemire.

The 6-foot-11 forward for the New York Knicks stepped from the chartered bus last Thursday and the cameramen departed, duly satisfied they had captured their shots.

But the party was just beginning.

Seemingly every one of the 9,000 athletes waiting to parade through Teddy Stadium here for the opening ceremony saw, touched, pointed or took pictures with Stoudemire, who appeared to revel in the attention, repeatedly rebuffing members of the Canadian delegation who offered escorts to a less hectic spot.

Some Brazilian athletes recognized Stoudemire first and asked him to pose for a picture. A step later, several Venezuelans followed suit. Then American rugby players wanted in on the action. And the Australians. The Germans. Britons. Hungarians.

As long as it was a group photo, Stoudemire obliged, even waiting patiently as the requesting players assembled. For more than three hours the cameras clicked.

Stoudemire, who is participating in the games as an assistant coach of the Canadian basketball squad, has long believed he has Jewish roots — or as he told JTA in an exclusive interview on Thursday, Hebrew roots.

“I’m not a religious person, I’m more of a spiritual person, so I follow the rules of the Bible that coordinate with and connect with the Hebrew culture,” Stoudemire told JTA.

“You have to read the book to get an understanding. The Bible is a history book. The ultimate goal is to … start to live the actual Scriptures instead of reading about [them]. It’s the actions that count.”

Stoudemire, who visited Israel shortly after signing with the Knicks three years ago, could not pinpoint his specific biblical observances, but he indicated that he strove to live an ethical and meaningful life.

Nor had he read up on Israel or Judaism in advance of this trip. But he does show off his Jewish symbols: a Star of David tattoo on his left thumb and a diamond YHWH charm spelling out God’s unspoken name on his gold necklace.

He has been influenced on his spiritual path by his parents, who he says are “both Hebrew.”

Stoudemire had already shaken off the Canadian team’s difficult journey to Israel. Its plane was delayed for three hours at the Toronto airport and, upon reaching Israel, circled several times because an emergency landing at Ben Gurion Airport had blocked a runway. Eventually the plane was diverted to Cyprus, landing in Israel five hours late.

That evening, the bus to the team’s first practice came an hour and a half late. Afterward, Stoudemire gathered his trainer and security men for a taxi ride to the Old City, where they ducked into King David’s Tomb and viewed the Western Wall.

Stoudemire said he “absolutely” feels a personal connection to Israelis and to Jews, although he’s unsure about the connection’s genealogical basis. In 2010, he indicated that his mother’s side of the family had Jewish roots.

“Through DNA, you can prove the Hebrew tribe,” he said.

“I studied history,” he added. “History helps to line things up for you. Just reading the Scriptures gives you an insight into what the history is. It gives you a good enlightenment into everything. … You understand certain customs and how to live. The Jewish culture has been able to somewhat embody the Scriptures.”

In New York, Stoudemire has held discussions on Judaism with local rabbis, whom he declined to name. He said the talks have been informative.

“I study Torah all the time,” Stoudemire said. “We study the Tanach. Our family celebrates all the High Holy Days. We’re definitely all in, and we’re Jewish. I had a Hebraic wedding in New York, so I’m definitely Jewish.”

But coming to Israel, he continued, is more about working with his players than his own spiritual journey.

Stoudemire says he relishes their desire to improve and believes he has much basketball wisdom to impart.

Stoudemire first became acquainted with the team last summer during tryouts in Toronto. He didn’t see the squad again until training camp began in early July. During a practice session in Jerusalem Thursday, he sometimes offered one-on-one instruction, sometimes shadowing players as they moved down the court.

“What I’ve noticed most,” Stoudemire said, “is that I understand when coaches say they genuinely love their players, being around their players, liking them, that they are saddened when they go away [to other teams] or graduate.”

John Dore, the Canadian head coach, says Stoudemire has been “almost seamless” in transitioning from player to coach.

“When he speaks, they listen,” said Dore, now coaching his fifth Canadian team at the Maccabiah. “They’re learning from one of the greats in the game.”

Later, as Stoudemire struggled to navigate the swarm of athletes, he looked to Canadian player Steve Raphael as a guide. Just as on the court, Stoudemire called to his charge to set picks.

As the crowd consumed him prior to the opening ceremonies, Dore called to Raphael, “You’d better set good screens now if you want to get onto the court.”

At the practice facility, Stoudemire handled a few more questions before heading inside to join the team, indulging a query about his gold ring that evokes the ancient Temple’s priestly breastplate, its 12 sections studded with gems.

His wife, Alexis, bought it for him as a wedding gift, Stoudemire said. They were married in a private ceremony in New York in December, then hosted a lavish celebration in Miami in late June.

“One thing this represents is world peace,” Stoudemire said. “That means to have shalom, to have peace among all people. That’s the proper way to live. It keeps you humble. It represents the 12 tribes. We’re all related.”

The next afternoon, Canada jumped to an 8-1 lead over Greece following two consecutive three-point shots. But Greece came roaring back, winning the Maccabiah opener by 16 points.

When the game ended, Stoudemire struggled to reach the locker room, high-fiving everyone along the way, his face grim in defeat. Back at the hotel, he had a two-hour workout to get in, followed by dinner at a Tel Aviv restaurant. He will be joined later in the week by his wife and their four children. After the competition, they plan to tour the country a bit before heading home.