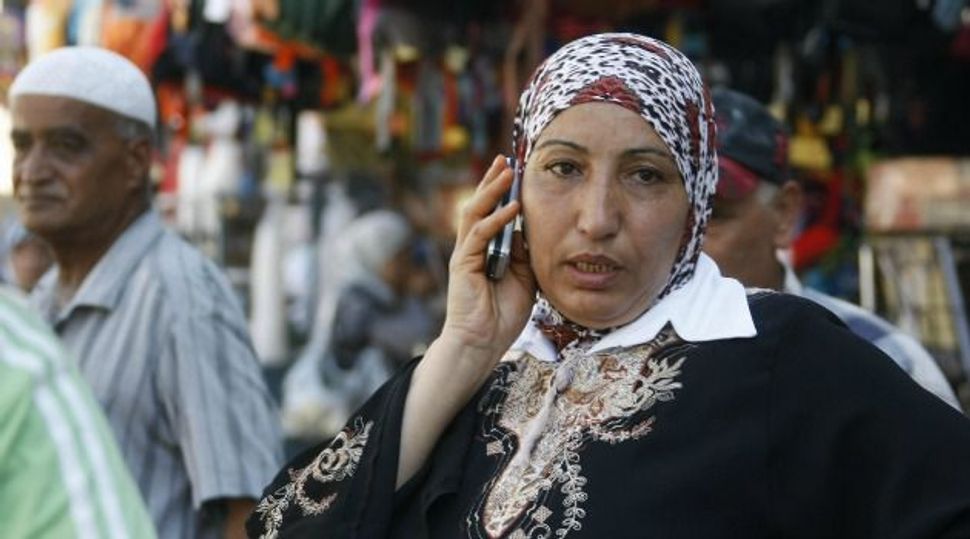 At the upscale November Café, near Palestinian Authority President Mahmoud Abbas’s house, the conversation and atmosphere are relaxed, and state-of-the-art smart phones rest on tables as their young owners sip cappuccino or fruit juice.

But despite the veneer of normalcy, the pinch of Israel’s 45-year-old occupation of the West Bank is palpable here. For one thing, the smart phones are limited in what they can do. They can’t provide email or Internet via Palestinian companies because Israel prevents these firms from offering 3G services. This has frozen the Palestinian telecommunications sector in a bygone era technologically.

“I am waiting, like many others here, holding smart phones without 3G,” photographer Noor Khatib, 33, told the Forward. Khatib, who shoots for a company that is part of Paltel, the biggest Palestinian telecommunications firm, explained that he preferred to forgo 3G rather than turn to an Israeli company for this service.

For the past seven years, Israel has refused to grant the Palestinian Authority electromagnetic spectrum for 3G service that it exclusively controls despite provisions in the 1993 Oslo Accords that appear to obligate Israel to provide this. The restriction has relegated the Palestinians to 2G, even as Israel prepares to launch 4G for its own citizens.

The Israeli veto on Palestinian firms seeking to offer 3G leaves the Palestinian companies far behind even the standards of the region: Algeria and Iraq are the only other two countries in the Middle East to lack 3G. Palestinians see Israel’s policies on the frequencies as reflecting a larger Israeli approach that stunts their economic development.

But in this case, protectionist profit making may also be a factor. Palestinian mobile operators say that they are losing tens of millions of dollars a year because they cannot provide 3G, while their potential customers are forced to turn to the Israeli companies providing this service to West Bank Palestinians. Estimates are that between 300,000 and 500,000 West Bankers have Israeli SIM cards that originate in Jerusalem, giving them access to 3G.

This captive market for Israel is not what was envisioned in the Oslo Agreement. The agreement, which both sides agree remains in effect, says that the electromagnetic spectrum is to be shared and that Palestinian frequency requests are to be granted within a month of their submission to a joint committee.

“Israel is acting in bad faith to keep the pressure on our economy, and it’s acting in favor of Israeli companies,” Suleiman Zuhairi, the P.A. deputy minister of telecommunications, told the Forward in an interview in his Ramallah offices. Zuhairi dismissed Israel’s proposal that the Palestinians rent frequencies from Israeli companies as “impossible.”

“The frequencies are a Palestinian right,” he said. “Why should I rent my atmosphere in Ramallah from an Israeli company?”

According to Zuhairi, the Israeli companies providing 3G to Palestinians do so “illegally,” without Palestinian authorization explicitly stipulated as a requirement in the Oslo Agreement. Shabi, the Israeli spokesman, rejected this, saying that the Israeli operators act “in accordance with the agreements between Israel and the Palestinian side.”

The actual text of the Oslo Agreement seems to favor Zuhairi’s argument. Under the agreement, Israel is empowered to offer telecom services only to settlements and military locations in “Area ‘C,’” the mostly rural part of the West Bank that is still under full Israeli military control. The agreement has no provision for Israel operating telecom services in Palestinian Authority areas ‘A’ and ‘B,’ the more heavily populated Palestinian self-rule zones where the Israeli companies have amassed their Palestinian West Bank market.

The Oslo Agreement also says that “operators and providers of services, presently and in the future in the West Bank and Gaza Strip, shall be required to obtain the necessary approvals from the Palestinian side.” But in practice this approval has never been sought or given.

No one interviewed in the cafe admitted to using 3G from an Israeli company. A spokeswoman for Partner Communications, the company that owns the major cell phone provider Orange, said she did not have statistics on how many Palestinians in the West Bank are using the company’s services.

“For many persons here, it’s a moral obligation not to use the Israeli telecom providers, but some people have no choice if they are businessmen or need Internet access on their smart phones,” Khatib said.

“We all need 3G,” added architect Sara Khasib, 23, who is also waiting for Palestinian providers to offer it. “It is not comfortable to need to send an email and to have to go back to the office to send it.”

Wadee Shalash, a journalist, said that 3G would make a big difference in terms of Palestinians being able to be in touch with relatives abroad, since Skype is of poor quality due to low Internet speed in the West Bank, and there are smart phone applications for free phone calls.

Fayez Husseini, CEO of Wataniya Telecom, which was given frequencies for 2G six years ago by Israel after a three-year delay, said that because Israel is holding back on 3G frequencies, it “cripples what we can do.”

“As long as they have 3G and the Palestinian operators don’t, they have a strategic advantage, a very clear differentiator. When it comes to patriotism, you can only push it that much,” he said. He estimated that his firm’s inability to provide 3G lost it $40 million to $50 million a year. Paltel CEO Ammar Aker says his company loses $80 million to $100 million in revenues a year because it lacks 3G.

Meanwhile, when it comes to domestic economic policy, Israeli Prime Minister Benjamin Netanyahu preaches the virtues of deregulation and touts Israel as a world hub of cutting-edge technology. Last December, Netanyahu proclaimed a “revolution in the field of fiber optics” whose goal was to “enable every home in Israel to hook up to fast Internet, of 100 mega, super-fast, and to do this at low prices.”

Fast Internet in every Israeli home, Netanyahu vowed, would wipe out differences between center areas like Tel Aviv and development towns in the periphery. “We are paving fast electric highways in order to enable this link and to cancel the existing technological gap,” he said.

Many Palestinians view Israel’s restrictions on electromagnetic frequencies as part of an overall policy in which Israel deprives the Palestinians of their share of the territory’s natural resources. This includes access to water and to land for building in the zone designated under the Oslo Agreement as Area C, which constitutes the majority of the West Bank and remains under full Israeli control.

“They are monopolizing our resources and keeping our economy in a situation in which it is unable to grow or to create jobs, or to get more taxes for the authority,” said Samir Abdullah, director general of the Palestine Economic Policy Research Institute, in Ramallah.

Mark Regev, a spokesman for Netanyahu, dismissed this allegation. “On the contrary, the Israeli government understands that economic growth and greater prosperity in the West Bank is a vital ingredient as we move forward in peace.”