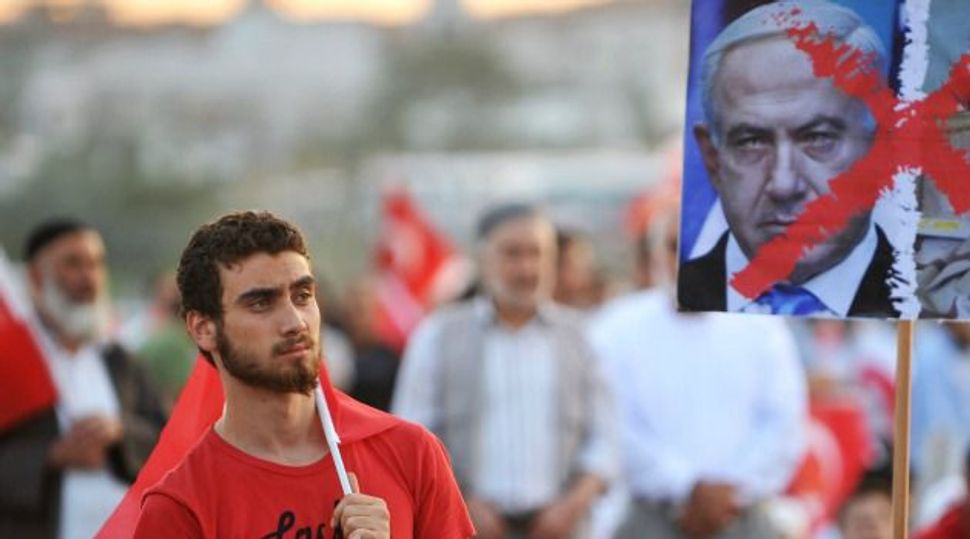 For a brief moment on March 22, relations between Turkey and Israel seemed to be getting on the right track.

From a cabin near the tarmac in Ben Gurion Airport as he was preparing to return home after a successful trip to Israel, President Obama called Turkish Prime Minister Recep Tayyip Erdogan with Israeli Prime Minister Benjamin Netanyahu by his side. In an apparent twinkling, Obama convinced Erdogan that it was time to normalize relations with Israel and then handed the phone to Netanyahu, who sealed the deal.

But nearly five months later, optimism over the prospects of an American-brokered rapprochement has all but vanished. The normalization process has turned out to be slow and painful as both parties continue to haggle over its terms.

Furthermore, after several months of calm relations, Erdogan returned to anti-Israel rhetoric, accusing Jerusalem on August 20 of orchestrating the military coup in Egypt which brought down the Muslim Brotherhood government. The Turkish leader said he was basing his comment on the words of an unnamed Jewish French intellectual who had said before the election in Egypt that even if the Brotherhood wins, it will not be allowed to rule the country. The United States condemned Erdogan’s remarks, calling them “offensive, unsubstantiated and wrong.”

The deal the three leaders sealed in March aimed to resolve bitter conflicts over Israel’s 2010 commando attack on the Turkish ship Mavi Marmara as it sought to break Israel’s siege of Gaza with a shipment of humanitarian goods. Nine Turks, including one Turkish American, were shot dead in the raid. Ten Israeli soldiers were wounded, one seriously.

During the phone call, Netanyahu and Erdogan agreed that Israel would compensate the families of victims of the episode and apologize for the incident’s outcome. In return, lawsuits filed by Turkish citizens against Israel would be dropped. The apology delivered by Netanyahu stressed Israel’s regret over the loss of life and for “any mistake that could have led to loss of life,” but did not include any Israeli admission that raiding the ship was illegal or wrong, as initially claimed by the Turkish government.

But the follow-up talks have foundered, and according to American analysts, the United States largely views the stalled negotiations as stemming from Turkey’s reluctance to finalize the process. The Obama administration, meanwhile, has been cautious about wading once again into this dispute.

“Turkey is a bit like Israel,” said Ross Wilson, who served as America’s ambassador to Ankara from 2005 to 2008. “The Turks don’t like to be told what to do, and therefore it is not easy to use sticks or carrots to shape Turkish policy.” Wilson, who now directs the Eurasia center at the Atlantic Council, said the best prescription for moving the process forward is patience. “In the long run, the regional factors will push the parties closer,” he said.

But in the short run, the lack of normal ties between Jerusalem and Ankara is a source of concern for all sides that share an eagerness to put the Mavi Marmara incident behind them and deal with bigger issues that have since plagued the region, mainly the Syrian civil war.

Talks between the governments of Israel and Turkey began shortly after the phone call between the leaders. Details of the dollar amount for the compensation deal were not officially published, and press reports put them anywhere from $60 million to $100 million for the families of Turkish nationals killed.

But on July 25, Turkish Deputy Prime Minister Bülent Arınç told reporters that money was not the issue. Rather, it was Turkey’s demand that Israel acknowledge that this sum reflects its responsibility for the deaths, not simply a one-time gift to the families. “Israel has to accept its wrongful act,” he said. Israel has insisted that the compensation should not be tied to any admission of culpability, since it fears that could set a precedent for future lawsuits in other international cases.

Israel, according to a government official, views this explanation as no more than a Turkish excuse for not following up on the rapprochement. “They want to bring us to our knees and read the text that they dictate to us,” a senior Israeli official told The Jerusalem Post, adding that all terms of the apology were settled during Obama’s phone call with Erdogan.

Experts following the issue believe that the delays reflect domestic Turkish political considerations, not differences with Israel. “When it comes to Israel, Erdogan has always shifted between pragmatism and a policy driven by ideology,” said Yigal Schleifer, an independent journalist and analyst covering Turkish affairs. “Erdogan understands that reconciliation with Israel will help, but the ideology came into the picture.”

Another factor weighing against advancing the process is the power in Turkey of the victims’ families and the “concept that Turkish blood has been spilled.” This, according to Schleifer, has “created a monster domestic issue” that is “bigger than what Erdogan can deal with.”

Still, on the other side of the equation there are many benefits for Erdogan and his government, if reconciliation with Israel can be achieved. These relate mainly to Syria, where the ongoing civil war has already driven more than 200,000 Syrian refugees across the Turkish border and has increased the threat of instability in Turkey, as weapons and terrorists could spill over into the country. Cooperation between Israel and Turkey on this front could be helpful for both countries, experts say, with Turkey bringing to the table its vast ties with Syria, and Israel adding its intelligence capabilities. “The whole could be greater than the sum of its parts,” said Soner Cagaptay, director of the Turkish research program at the Washington Institute for Near East Policy.

Repairing relations with Israel could also allow Turkey to assert once again its role as a leading power in the region and as a possible interlocutor between Israel and its neighbors, a role it had played in the past in indirect negotiations with Syria and in dealing with Hamas in Gaza.

But the biggest bonus for Erdogan would be returning Turkey’s relations with the United States to a positive track. The flotilla incident, and more recently the actions by Erdogan’s government to crush protests in Gezi Park in Istanbul, have fueled discontent with Turkey in Congress and raised questions about the close ties between Washington and Ankara. “Prime Minister Erdogan needs to create a priority list,” said former congressman Robert Wexler, who is known for his close ties to Israel, Turkey and Obama. “Turkey’s interests will be better served if it works in cooperation with Israel.”

Wexler is among those who believe that in order to make that happen, the United States can help Erdogan by providing him with the public support he needs in order to strengthen his hand in the domestic arena. It’s a task made even harder given widespread criticism of the Turkish leader’s dealing with protests at home. “We need to keep in mind he is a fully legitimate democratically elected leader,” said Wexler, who now heads the S. Daniel Abraham Center for Middle East Peace. “Our challenge is to help Erdogan find the way forward, and in my humble opinion, this way should be a more liberal and open way that will strengthen Turkish democracy.”

Ankara has been looking at Washington for support on many fronts. These include taking Turkish economic concerns into consideration when negotiating a new trade agreement between the United States and the European Union, and supporting Turkey in its wish to become the main conduit for the export of natural gas from the newly found gas fields off the shores of Israel.

But the Syrian crisis, which overshadows all other concerns, has made any further American intervention even more complicated.

“Syria is the only sweetener,” Cagaptay said. “Any phone call from the White House to Ankara asking to move forward on the Israeli issue will be met with a Turkish request to act on the Syrian issue.”

Syria, however, is the one issue on which the United States cannot deliver, as the Obama administration and the American public have shown little appetite for military intervention or even for limited measures such as establishing a no-fly zone or protected humanitarian corridors.

On August 8, Obama and Erdogan spoke by phone at the request of the Turkish leader. The conversation centered on the situation in Syria and touched on the latest unrest in Egypt. Israel, at least according to official accounts of the conversation, was not mentioned.