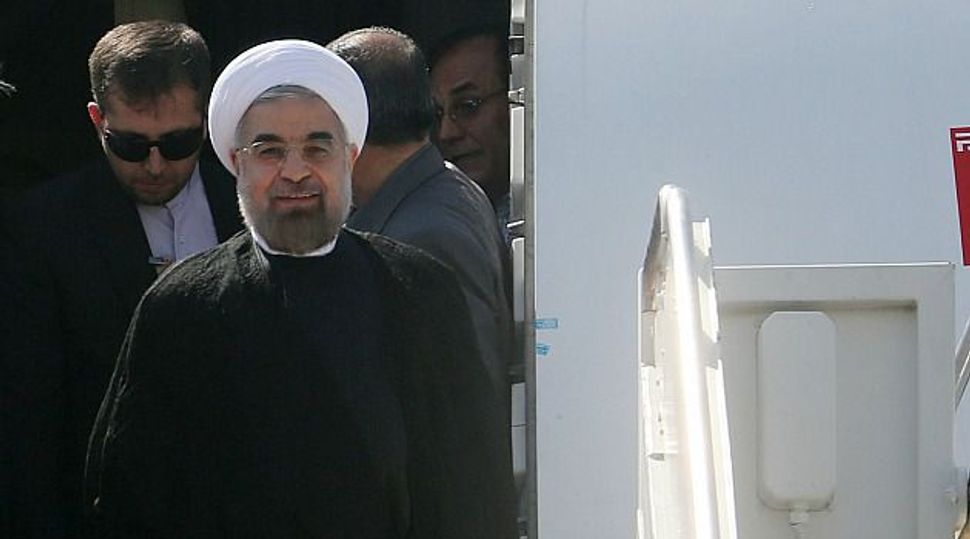 Man of the Moment: Iran?s Hassan Rowhani, who returned from his historic trip to the U.S., appears to be a man who wants to take yes for an answer. Image by getty images

Longtime advocates of a two-state solution to the Israeli-Palestinian conflict can often be heard saying that after decades of talks, “everyone knows what the deal on the table is.” Known it may be. But it always seems that one, the other, or both of the parties involved have their reasons for never being able to bite the bullet.

With Iranian President Hassan Rowhani and President Barack Obama, things are quite different.

From the moment the white-turbaned cleric strode into the reception room at New York’s One UN Hotel for the final press conference of his recent New York visit, he projected the air of a man who knows very well what the deal on the table is. And he seems eager to take it.

The process on which he is embarking, he told reporters, will “ensure that the Iranian people can enjoy their rights, and at the same time build confidence in the international community that those rights are being used for peaceful purposes.”

“Within a very short period of time there will be a settlement of the nuclear issue,” he said. “And step-by-step [this will] pave the way for Iran’s better relations with the West, including the expansion of economic ties, the expansion of cultural ties and the expansion of relations between the Western nations and Iran.”

This does not mean the talks to come will succeed. A better indication of that will come in Geneva, on October 15, when his foreign minister is scheduled to meet with the United States and other permanent members of the UN Security Council, plus Germany, to further develop what Rowhani termed his “constructive” initial engagements with the United States last week, discussions he described as “completely different from those in the past.”

But Rowhani understands quite well what the basic price will be for the end to Iran’s isolation, which is what he seeks. Asked if Iran was “ready to immediately open up its [nuclear] facilities” to put to rest the world’s concerns about their use to build nuclear weapons, he replied promptly that the negotiations “have been set up to serve this purpose.”

That open acknowledgement of the goal is new. Its fulfillment, if achieved, would reverse years of resistance by Iran on this score.

In tandem with this, the United States and other Western countries will come to Geneva understanding quite well what Iran’s price is for them. And Rowhani was not shy about stating it.

“We say clearly we want to have the right to retain nuclear technology,” he said at the September 27 press conference. “We say clearly and openly we want this under the authority of the IAEA,” or International Atomic Energy Agency. “We say explicitly that we do not seek a bomb. We say explicitly that we believe the building of a bomb is dangerous for us – for our region.”

He promised “transparency,” adding, “We want to provide more assurances, if necessary, and they [Iran’s negotiating partners] want to ensure us they won’t undermine Iran’s peaceful nuclear progress.”

It was the one segment of the press conference during which the famously composed cleric appeared to get a bit worked up. Over some 80 minutes, Rowhani took each question methodically, even graciously from the large gaggle of reporters, his only body language the occasional swaying of his head left and right as he spoke. But he seemed adamant to say that Iran’s price for an agreement is an end to the demand for “zero enrichment” of uranium.

That demand has been a mainstay of U.S. rhetoric, if not policy, for years. But Obama’s breakthrough phone conversation with Rowhani on September 27, held as the Iranian sped off to JFK Airport and a flight back home, was followed quickly by a White House statement announcing the end of this era.

“I have made clear that we respect the right of the Iranian people to access peaceful nuclear energy in the context of Iran meeting its obligations,” Obama said in the statement. “So the test will be meaningful, transparent, and verifiable actions, which can also bring relief from the comprehensive international sanctions that are currently in place.

What’s on the table now is not a halt to Iran’s uranium enrichment but the terms and conditions for international monitoring of that enrichment, some significant limits on its extent and protocols for international inspections to ensure that whatever enrichment is agreed upon will not enable Iran to divert uranium for nuclear weapons or quickly “break out” into nuclear weapons production.

As one Israeli foreign ministry official put it to me, “Enrichment is unacceptable, period. Because we don’t believe it’s for peaceful purposes. Why would Iran need nuclear energy when they have the second largest oil reserves in the world?”

That is the case that Netanyahu will make to the General Assembly Oct. 1, when, following Rowhani and Obama’s star turns last week, he gives his own speech there.

As with his rejection of what “everybody understands” about the contours of a deal with the Palestinians, this stance risks driving Israel further into international isolation. But it’s even worse; unlike the Palestinian issue, this issue is not one on which the United States or other Western countries accept that Israel is the key negotiating partner. Unless Israel’s supporters in Congress succeed in upending the whole premise the administration accepts as the basis for these talks — as Israel hopes they will — Netanyahu will simply get left in the dust as the rest of the world moves forward — and quite quickly at that.

Most importantly, Israel’s position will leave it with no way to influence the issues that actually are being discussed by those who are at the table — issues in which it has a crucial interest.

Ironically, this may end up being a case of “be careful what you wish for.” For years, Netanyahu has insisted that the nuclear threat of Iran must be addressed before the world demands that he prioritize negotiating an end to Israel’s occupation of the Palestinians in the West Bank and Gaza, with all the risks that process will entail. Furthermore, he has demanded that any negotiating process set up to address the Iran issue take no more than a few months — six maximum, he said back in 2009, the last time the prospect of such talks emerged, lest Iran just stretch things out while it continues to enrich. And now, that is precisely what both sides seem set to do: Resolve the Iran nuclear issue first, as he remains mired in talks with the Palestinian Authority, and resolve the Iran issue in “months, not years,” as Rowhani put it last week in New York.

Though the Security Council and the IAEA have both demanded that Iran suspend its uranium enrichment, that is not because Iran has no right to do so. To the contrary, the Nuclear Non-Proliferation Treaty, to which Iran — but not Israel — is a signatory, guarantees all those who sign it a right to enrich uranium, so long they do so under conditions of international transparency and monitoring that enable others to ensure the enrichment is for peaceful purposes only. Iran’s failure to satisfy those conditions up to now is what has led to the suspension demands. But if Iran can address those demands to the satisfaction of the countries setting out on this new negotiation process, it will be able to reassert its rights under the treaty.

If it turns out Iran is unable or unwilling to pay the price of satisfying these countries — in particular the United States — the whole effort will collapse. But the question for Israel, whose own nuclear arsenal Iran is increasingly highlighting, is what position can it adopt so as to best influence this process for its own security?

Right now, “zero-enrichment” does not look like the best bet.