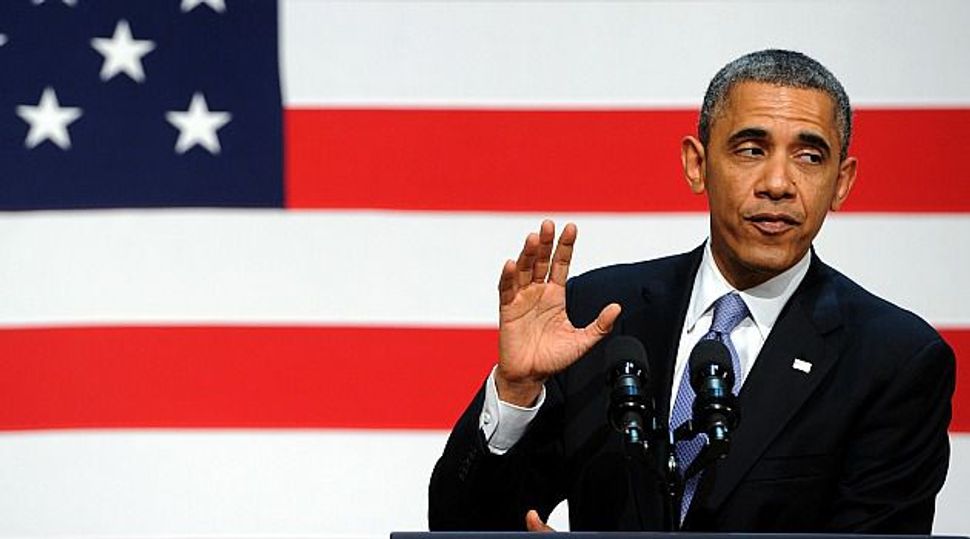 American Jewish organizations have taken a step back from the barricades in the emergent conflict between Israel and the United States over the interim agreement with Iran on its contested nuclear program.

Even as Israel has fiercely attacked the agreement, signed by the United States and five other countries with Iran, the Jewish organizations have carefully sought a middle ground between Israel and America in their dispute over the six-month accord. The groups’ nuanced approach has extended even to their positioning on a final, comprehensive agreement that the parties hope to negotiate with Iran by the end of the interim agreement’s term.

By and large, mainstream pro-Israel organizations have accepted the six-month accord as a fait accompli. Most notably, they have backed down from attempts to get Congress to pass new economic sanctions against Iran during this period, a move the Obama administration warned would derail the interim nuclear deal. That was a development that the Jewish groups apparently decided they did not wish to be held responsible for.

The groups’ main focus is instead now directed at shaping the final accord between Iran and the group of six world powers negotiating with it to ensure Tehran’s civilian nuclear program cannot be used to create nuclear weapons. But here too, Jewish organizations are carrying out a difficult balancing act, trying to push the administration to impose the toughest possible conditions on Iran, but stopping short of posing demands that would be seen as making such an agreement impossible.

“We pray that the best intentions and hopes of those United States and Western officials who struck this deal are realized and that our skepticism and fears are misplaced,” said the Orthodox Union in a statement reflecting the general mood in the pro-Israel community. “Nothing short of the lives of millions of innocents hang in the balance.”

Like many other countries, Israel disputes Iran’s insistence that its program is solely for peaceful purposes. Iran, which has called for Israel’s liquidation as a Jewish state, has defied several U.N. Security Council resolutions calling on it to suspend its enrichment of uranium — a process crucial to both civilian and military nuclear uses — until it satisfactorily addresses questions raised by the International Atomic Energy Agency, the body charged with monitoring civilian nuclear programs under the Nuclear Proliferation Treaty. (Israel, which itself possesses nuclear weapons, is not a signatory to this treaty.)

Pro-Israel organizations have been huddling with the administration ever since the ground breaking interim agreement was signed with Iran on November 23. In conference calls and private phone conversations, White House and State Department officials sought to address many of the Jewish community’s concerns. At the same time administration officials have sent a clear message that pursuing new sanctions against Iran during the interim period would not just put at risk the agreement already achieved it would also break apart the international coalition dealing with Iran, making any future global sanction moves more difficult.

On one such call, with deputy national security adviser Tony Blinken and under secretary of treasury for terrorism David Cohen, questions from Jewish federation and Jewish Community Relations Council activists reflected to a great extent the talking point Israel had put out in the days following the Geneva signing ceremony. The Jewish leaders voiced strong skepticism over the deal, with one caller reading out Iran’s violations of Security Council resolutions, another questioning the wisdom of loosening pressure on Iran, and several others seeking explanation for the administration’s request to halt new sanction activity.

A similar call took place with members of the Conference of Presidents of Major Jewish American Organizations. Both were declared as off-the-record conversations.

Administration officials, mainly from the National Security Council, also reached out to Jewish organizational leaders personally to brief them on the accord and on the road ahead in dealing with Iran.

The concerns raised in these conversations reflected the overall distress among many mainstream Jewish leaders over the compromise with Iran. But they do not necessarily reflect the views of the broader Jewish community. The recent survey by the Pew Center for Research, although it was conducted before negotiations with Iran began, found that 52% of American Jews support President Obama’s handling of the nuclear crisis with Iran. An American Jewish Committee poll this year revealed that Jewish Americans are growing less supportive of the use of military force to resolve the nuclear conflict with Iran.

More recently, a CNN/ORC poll taken shortly before the interim agreement was reached, indicated that the broader American public supported the prospective accord, whose broad outlines were already public. In the poll of 843 adults, conducted between November 18 and November 20, 56% of said they would favor an international agreement that would ease some sanctions on Iran and impose major restrictions on Iran’s nuclear program but not end it completely. Thirty-nine percent were opposed to this. The survey’s overall sampling error was plus or minus 3.5 percentage points.

The Jewish groups’ change of tone was influenced by the administration’s efforts to defuse tensions with them and recognition among communal leaders that a head-to-head clash with the administration, and with American public opinion, would be futile. The American Israel Public Affairs Committee, which sets the course for most of the pro-Israel community by virtue of to its size and influence, reflected the shift in messaging in a statement it issued on November 25. In its statement, AIPAC dialed down its opposition on the two key factors that have set Israel and the Obama administration apart.

On the question of requiring new sanctions during the six-month interim period, AIPAC broke with the Israeli position and is no longer advocating for immediate increase in sanctions on Iran. Instead, it supports a move by Democratic and some Republican senators to pass new legislation but ensure it only kicks in only if Iran violates the Geneva agreement.

Looking forward to the discussion over Iran’s future civilian nuclear program under the expected final agreement, AIPAC is now defining its red line as insisting the United States “deny Tehran a nuclear weapons capability” — a vague term that falls short of Israel’s demand for “zero enrichment” by Iran of uranium for its nuclear production.

In the run up to the Geneva accord the lobby had led the way with an advocacy drive for immediate sanctions despite the administration’s opposition to the move.

AIPAC did not give up its criticism of the deal. Its statement quoted lawmakers describing the dangers it entails and cited what the pro-Israel lobby viewed as shortcomings in the compromise.

“American officials deny that they recognized any Iranian ‘right’ to enrich, but appear to have conceded as a practical matter that Iran will be allowed some enrichment capacity,” AIPAC stated.

Mainstream Jewish organizations have, by and large, expressed similar thoughts about the Iranian deal, injecting a dose of skepticism over the prospects of a deal without shutting the door on the possibility that an accord can be struck. The Anti-Defamation League, for example, while expressing “deep concerns” over the interim agreement, commended the administration and stressed the need for Israel and the United States to work together to ensure a permanent deal answers all concerns.

Jewish groups on the right and on the left, chose to set nuances aside in favor of broad brush strokes. The Zionist Organization of America called the agreement “our era’s Munich” and compared president Obama to former British Prime Minister Neville Chamberlain, who signed an agreement for “peace in our time” with Adolf Hitler just before Germany invaded Poland, setting off World War II.

On the left, J Street and Americans for Peace Now praised the agreement and urged Congress to “get behind it.”

The approach taken by the leading Jewish organizations reflects a reluctance to enter major battles in which their chances of succeeding are slim. The last time AIPAC willingly took on an American administration to fight for a cause supported by the Israeli government was in 1992, when the administration of George H. W. Bush refused to transfer $10 billion in loan guarantees to Israel unless it halted its expansion of Israeli Jewish settlements in the occupied West Bank. In the bitter fight that ensued in Congress, the lobby – and Israel – lost, creating an even deeper rift with the American administration. Since then, AIPAC and most pro-Israel organizations have avoided these types of battles, making sure they do not put themselves in an all-or-nothing position with the administration.