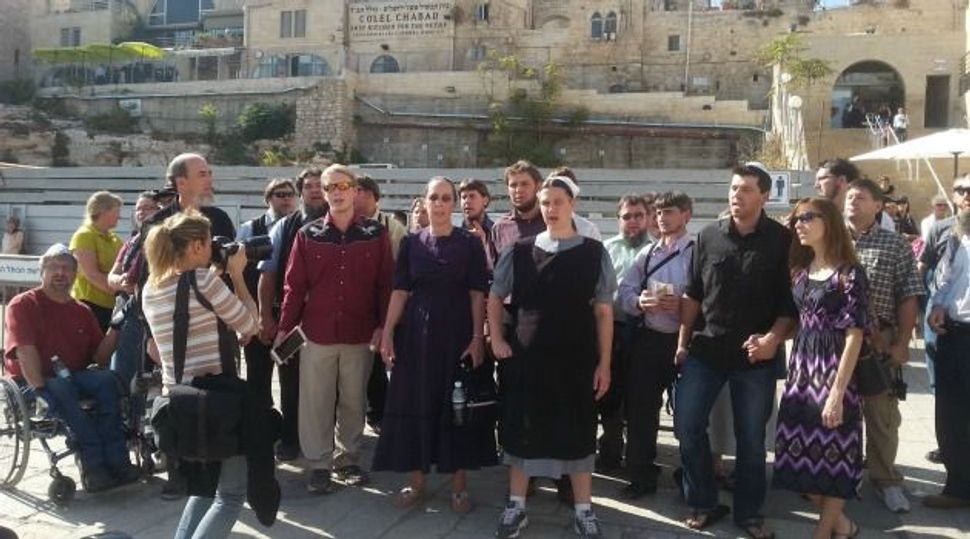 Amish preacher Roy Yoder normally marks Thanksgiving the traditional way in his Montana home. But this year, he celebrated Hanukkah instead — in Israel.

Instead of tucking in to a turkey meal, he feasted on falafel, and instead of reflecting on the pilgrims, he spent the day learning about the story of the Maccabees.

Yoder isn’t the only American Amish person who exchanged customs and countries for the holiday. He traveled to Israel with almost two dozen others, who came with the express aim of apologizing to Jews for failing to protect them in the past, and for what they consider the undertone of anti-Semitism among those who practice Anabaptism, the branch of Christianity that the Amish come from.

“The Anabaptists have developed over many generations an anti-Semitic attitude, not that you could tangibly see it, but it was underneath the culture, and when the Lord opened my eyes to the fact that the Jews are still his people I realized that we owed them an apology,” said Ben Girod, bishop of an Amish community in Bonners Ferry, Idaho.

In the process of apologizing, the Amish have become enamored with the Hanukkah story of the Maccabees stubbornly refusing to adopt the cultural practices of their day’s dominant culture, as a source of inspiration for their past and present challenges. The group honored the holiday of light by presenting every rabbi they met with a traditional low-tech Amish oil lamp.

“People are always trying to change us,” complained Yoder as he waited for his falafel, and then said pensively: “We’re not thinking about Thanksgiving but we are thinking about Hanukkah.” In the aptly chosen Hasmonean Room next to the Western Wall, the group listened attentively to Shmuel Rabinowitz, rabbi of the site, talk about Hanukkah. Girod then declared to Rabinowitz: “I believe we understand in some way from our own past how we can’t exist if our values are taken away from us.” Other rabbis who received apologies from them during the 10-day mission included Ashkenazi Chief Rabbi David Lau, Rabbi Roberto Arbib, who leads a Conservative congregation in Tel Aviv, and the only U.S.-born Knesset member, Rabbi Dov Lipman.

The trip split up families for Thanksgiving, and incurred a cost of thousands of dollars to participants and the few donors from their communities who supported them, despite the Jerusalem-based Keshet: The Center for Educational Tourism being so inspired by their story that it organized the itinerary at cost price. But the families said it has been worth it to express regret and “bless” Jews at every opportunity.

“We didn’t stand up during the Holocaust and we want to say that we will stand up for Jews now,” said Verna Yoder (no relation to Roy Yoder), a mother of six from Girod’s community.

For her, the trip is about giving the next generation of Amish a different message about Jews from the one that her generation grew up with. “It’s Thanksgiving and my children see the sacrifice that I’m here instead of at home, and that speaks volumes to them,” she said.

The Amish on the trip represent a very small strain from within their movement. The majority of Amish wouldn’t travel to Israel because, apart from anything, they wouldn’t step foot on an airplane, while the visitors take a more liberal view towards technology. The Hanukkah mission also represents a theological departure from the mainstream: The visitors come from communities that have increased their emphasis on studying the Hebrew Bible, which they say convinced them to shun the “replacement theology” on which they were raised — namely the belief that God rejected the Jews when Christianity emerged.

Standing in the Western Wall Plaza after praying with his group using the traditional German liturgy, 35-year-old Steve King recalled how his 50-strong commune in Pennsylvania increased Bible study and adopted positive views towards Jews seven years ago. Before then, he said, “We were in a sense told not to read the Bible too much [because] it’s not a good thing.”

The response of the Amish establishment to this reassessment of technology, scripture and Jews has been varied. In states where Amish are relatively progressive, such as Ohio, there have been no punitive measures. In stricter areas, such as Pennsylvania, people have been excommunicated — and Girod is one of them, although he still lives what he says is a faithful Amish life. Roy Yoder, by virtue of the fact that he hails from Ohio, isn’t excommunicated — and is free to associate with Girod because Ohio Amish only observe Ohio excommunications.

The birth of a philo-Semitic strain among the Amish can be traced back to 1981, the year when Girod believes that the “power of his holy spirit came upon [him]” and led him to explore relations with Jews. However, its translation to action was a long time coming. The first Amish trip to Israel took place in 2010 and the second was last year. But the trips have still not led to the establishment of any relationships between Amish and Jewish communities in the U.S.

For many who have taken part in previous trips, the Hanukkah mission was the most poignant one so far. Following the West’s agreement to an interim nuclear deal with Iran, they feel that their commitment to stand up for Jews with greater devotion than they did during the Holocaust has suddenly taken on real relevance.

Roy Yoder said that the group — which is united in opposition to the deal — was praying with extra devotion during the trip for “the president’s eyes to open to see the blessing that we have had when we stood with Israel.” Barack Obama should, he said, be guided by Israel on the Iranian threat and act in accordance with whatever its wishes are.

Lots of participants recounted how they came to love Jews and Israel by becoming more engaged with the Hebrew Bible, but some recounted more personal circumstances.

In addition to the four Amish communities represented there was a community from each of the other main movements within Anabaptism — Mennonites and Hutterites.

Matthew Weaver directs a Mennonite ministry in Ohio and acknowledged that he is breaking the mold of Mennonite ministries, which often oppose Israel and support Palestinians — just “for pity’s sake,” he said disparagingly.

Christian theology has often used family motifs to explain God’s relationship with Israel, which sinned by rejecting Jesus and therefore became disinherited and replaced in the “Father’s” affections by the Christians. Weaver, however, said that his experiences as a father of 13 challenge this analogy. “Six years ago my wife and I adopted five children and we have eight children theologically,” he said. “I started thinking ‘what if my biological children would turn their back on me.’ Regardless of that I would still love them.” Making the connection with “replacement theology” he said: “There’s no way the adopted children would replace them.”