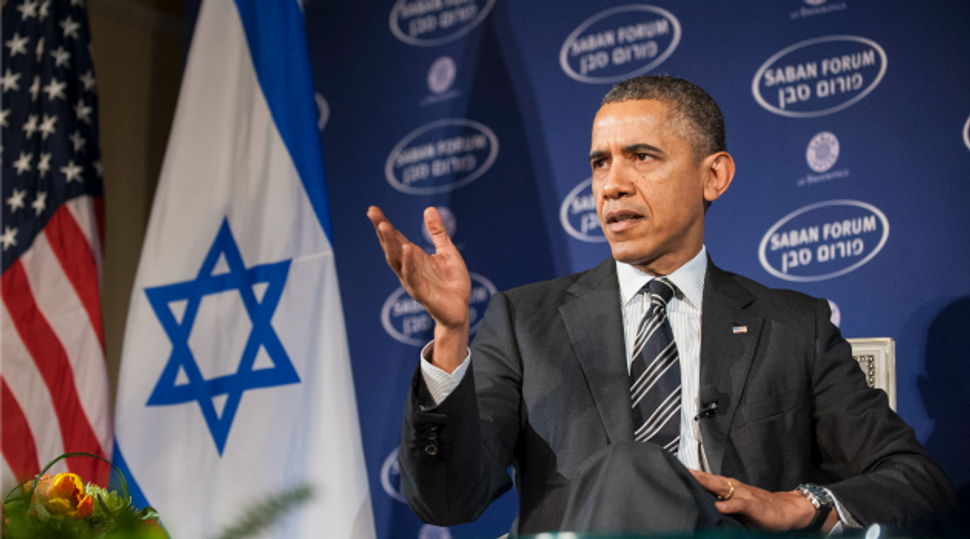 The singular power and influence of Haim Saban, an Israeli-American, Hollywood-based media mogul, brought top Israeli and U.S. officials together last weekend to discuss the troubles now roiling relations between Washington and Jerusalem. But even three days of high-profile speeches, closed-door discussions and cocktail schmoozing could not mask the deep differences between Washington and Jerusalem.

If anything, the 10th annual Saban Forum, which convened in Washington’s tony Willard Hotel, starkly outlined the fault lines separating the Obama administration and the Netanyahu government in Israel on the two key issues separating them: Iran’s nuclear program and the Israeli-Palestinian peace process.

On Sunday morning, Secretary of State John Kerry could be seen huddling in a side hallway of the Willard, just outside the conference hall hosting the forum, with his special envoy to ongoing Middle East peace talks, Martin Indyk, and with U.S. ambassador to Israel Dan Shapiro.

It couldn’t have been a cheerful moment.

Kerry, who cajoled the Israelis and Palestinians into reconvening their long dormant negotiations in July, had just ended his first meeting with Israel’s re-installed foreign minister Avigdor Lieberman. But despite his declaration in Jerusalem just prior to the conference that important progress had recently been made in those talks, Lieberman himself described the chances of reaching a deal as “mission impossible” in his speech to the conference, also on Sunday.

Throughout the weekend, in fact, Israeli officials all but shot down Kerry’s efforts to bring them and the Palestinians closer to a deal.

Just minutes after Lieberman gave his speech, Israeli cabinet minister Silvan Shalom told reporters standing outside the hall that reaching an agreement with the Palestinians within the six months still left under the American timeframe was “detached from reality.”

Just last week Kerry and his State Department team presented the Israelis with a detailed plan prepared by retired General John Allen that aimed to address any security concerns Israel might have regarding the creation of a Palestinian state in the West Bank — the ultimate goal of the negotiations.

“Never before has the United States conducted such an in-depth analysis of Israel’s security requirements,” Kerry told the Saban participants on Saturday, adding that Allen’s plan will “make sure that the border on the Jordan River will be as strong as any in the world.”

But Israeli Prime Minister Benjamin Netanyahu, addressing the gathering via satellite on Sunday, seemed to minimize the effort’s importance and shifted his focus to a different concern.

“The core of the conflict has never been borders and settlements,” he told the gathering. “It is about one thing: The persistent refusal to accept the Jewish state in any border.” For some time, Netanyahu has sought to raise the issue of Palestinian acceptance of Israel as a specifically Jewish state, not just as a diplomatically recognized and accepted state in the region. This was not a precondition for Israel’s peace agreements with Egypt or Jordan. But it is now playing a greater role in Israeli rhetoric.

A former top Israeli political figure, stepping out of the room after Netanyahu’s speech, called the attempt to focus on Palestinian recognition “a mere distraction.” Speaking on condition of anonymity, the former official pulled out his smartphone and brought up a Youtube video showing the late Palestinian leader Yasser Arafat stating in 1974 that he will recognize a Jewish state. “You see, and this was Arafat who said it, so what does Bibi want now?” the former official asked.

Kerry remained optimistic. While scaling down hopes from a full agreement to a “framework” for a gradual permanent solution, he forcefully tried to convince Israelis a deal with the Palestinians is their best chance. “Force cannot defeat or defuse the demographic time bomb,” he said, referring to birthrate trends that portend a Palestinian majority in the Israel and the West Bank, if one does not already exist.

“People are skeptical, but there seems to be some hint that he knows something we don’t know,” said Robert Danin, a former peace negotiator now with the Council on Foreign Relations. “We hope that’s the case.”

Meanwhile, the two sides’ differences on Iran were, if anything, even clearer.

President Obama, openly, and at times bluntly, took issue with each and every Israeli objection to the way discussions with Iran are being held and with Israel’s opposition to the interim agreement his administration recently reached with Iran on the Islamic Republic’s contested nuclear development program. Both Israel and the U.S. say they seek to prevent the prospect that Iran’s program could allow it to develop nuclear weapons, as many observers believe Iran aims to do, despite its denials. But the differences in tactics were sharp.

Obama rejected Israel’s demand that sanctions be increased while negotiations for a final agreement are taking place. The idea that Iran would cave in if sanctions were ratcheted up, he said, “does not reflect an honest understanding of the Iranian people or the Iranian regime.”

The president also flatly rejected Israel’s demand that Iran, under a final agreement, should completely give up all uranium enrichment, describing it as an unrealistic expectation.

“One can envision an ideal world in which Iran said, ‘we’ll destroy every element and facility and you name it, it’s all gone,’” he said. “I can also envision a world in which Congress passed every one of my bills that I put forward.” The audience, or at least the Americans in the crowd, responded with laughter. “I mean, there are a lot of things that I can envision that would be wonderful,” he said.

Obama went on to state that the United States could accept low-level enrichment under strict limitations and monitoring, as part of a final agreement.

“I hope the people of Israel had an opportunity to listen, to think, and to understand our rationale and our goals, because at the end of the day we have the same goal which is to prevent Iran from obtaining a nuclear weapon,” said Ambassador Shapiro after Obama’s speech.

But Israeli officials were not moved. They maintained that their government’s firm rejection of the interim agreement with Iran and its tough stance on a final deal were paying off. “It is strengthening America’s hand,” said Likud MK Tzachi Hanegbi. Intelligence Minister Yuval Steinitz added: “We cannot remain silent and hide disagreements when it comes to our existence.”

Saban, the conference’s host and a major donor to Obama’s Democratic Party, told Israeli TV that bringing the president to speak to an Israeli audience was his personal highlight. “It is very important for the relationship to have the president speak to the Israelis,” Saban said. “And for me, bringing the American president closer to the people of Israel is a life goal.”

Jeffrey Goldberg, a columnist for The Atlantic who participated in the forum discussions, marveled at Saban’s ability to draw the stellar retinue of top leaders from the two sides to his conference: “Everybody wants to be the king of the Jews, but I think he might be the king of the Jews,” Goldberg said. “When he picks up the phone people answer and they do him favors.”